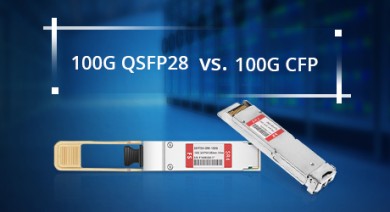 Nowadays, the development momentum of optical modules is unstoppable, among which the 100G optical modules take up most of the market share, such as 100G CFP and QSFP28. Then 100G CFP vs QSFP28, what are the differences and how to choose? This article will give a detailed introduction to CFP and QSFP28 with their specific applications involved.

For the differences between 100G CFP and QSFP28, this article will have an introduction to them in these aspects of definition, power consumption, port density, cost, and application.

CFP vs QSFP28 Round 1: Definition

CFP is a multi-source agreement (MSA) to define the form-factor of the optical transceivers for high-speed digital signal transmission. The electrical connection of a CFP uses 10x 10 Gbit/s lanes in each direction (RX, TX). While, the optical connection can support both 10x 10 Gbit/s and 4x 25 Gbit/s variants of 100 Gbit/s. 100G CFP modules offer connectivity options for a wide range of service provider transport, data center networking, and enterprise core aggregation applications. 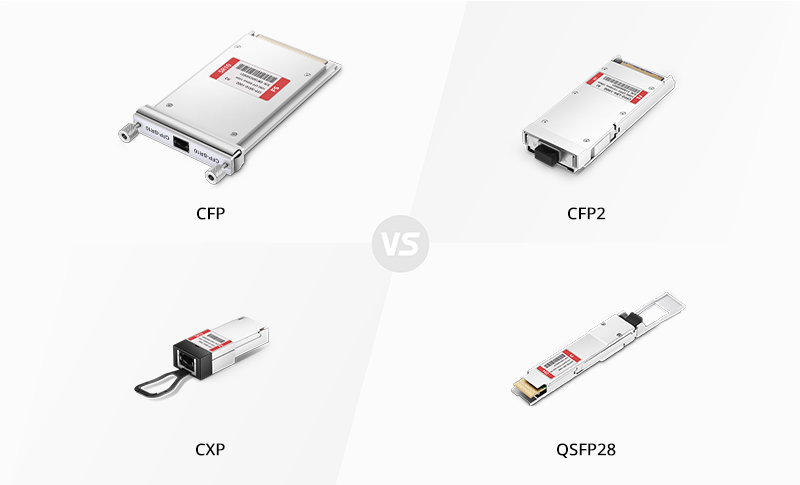 CFP vs QSFP28 Round 2: Power Consumption

CFP vs QSFP28 Round 3: Port Density

The size of QSFP28 is the smallest 100G transceiver on the market. CFP4 is only a quarter of the width of the first generation of CFP. But it is still about 66% larger than QSFP28 in packaging form. This difference in size indicates that QSFP28 is much more efficient in port utilization than CFP.

Considering the power consumption and the port density, it will cost less to use QSFP28 in the system. Also, QSFP28 is less expensive than CFP.

CFP vs QSFP28 Round 5: Application

CFP, one of the recommended 100G optical modules, is mainly applied in metro network and long-distance transmission (normally over 10km).

There are many QSFP28 products on the market, which are mainly divided into the following four applications according to the transmission distance:

QSFP28 DAC cables are ideal to use in short-range connections within 5m. They can offer a complete cable assembly in a cost-effective manner.

For long-span 100GbE deployment, such as connectivity between two buildings (mostly up to 10km), QSFP28-100G-LR4 with duplex LC single mode fiber is the preferred option defined by IEEE. For longer distances (up to 40km and 80km), 100G QSFP28 ER4/ZR4 transceivers are better.

As for 100G CFP vs QSFP28, which to use for your network construction? Actually, it depends on two main aspects: the port type of your hardware device and application scenarios. CFP modules have a much larger size than QSFP28 modules. 100G QSFP28 appears to be the mainstream and is mostly used in shorter distances (0-10km) between switches or sometimes in long distances (up to 40/80km) with QSFP28 ER4/ZR4 and single mode fibers. While, although 100G CFP can be used in short distances as well, it is more common in metropolitan area networks (MANs) and long-haul WDM transmissions.