The Metropolitan area network, which is also known as metro network or MAN, is the network that connects multiple LANs in the size of a metropolitan region. It has been evolving for several years and has been updated continuously to be futureproof for rolling out new services based on high speed. As one of the most typical applications of 100G network, what does today's 100G metro network feature and how many 100G connectivity solutions are there for MAN networks?

The cover range of metro networks can be different, some as small as several kilometers and some as large as a couple of hundred kilometers. Generally, the distance that MAN covers is around 5 to 50km.

Metro network does not belong to a particular organization. The ownership of metro network can be private or public. And it can be a single network such as a wired Internet connection for TV, or a large-scale network formed by connecting multiple LANs.

The common metro network scenarios are as follows:

With the development of new technology and more and more devices interconnected with each other, the use of metro networks will continue to increase. For the sake of the requirements of a bearer network for diversified services, metro network implements multi-layer construction. Typical IP MAN is divided into three layers: core layer, service control layer, and access layer. The core layer provides a high-bandwidth service bearer and transmission. To meet the exploding bandwidth over the years, a 100Gbps link is often deployed in the core layer. Until these years, as metro traffic grows fast, some carriers begin to bring 400G into MAN and 100Gbps link is expected to move to the access layer. 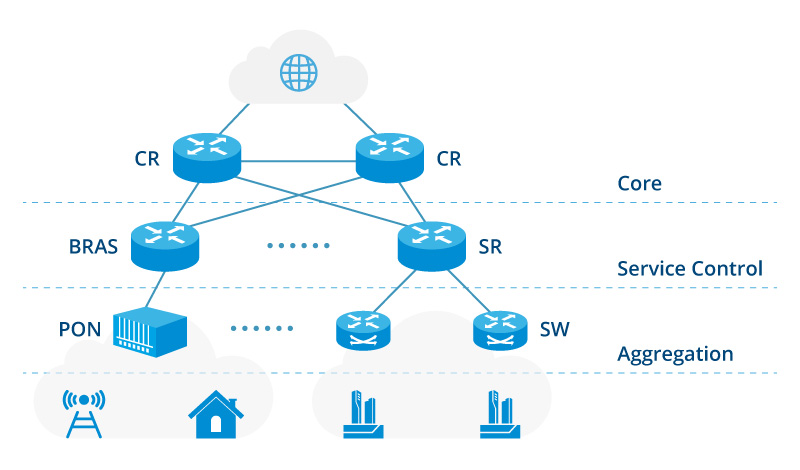 According to the different technologies that form a metro network, the metro network can be divided into three main platforms: SDH/SONET, Ethernet, and WDM.

Among these platforms, SONET/SDH is the traditional one, but it is gradually taken place by Ethernet—the original standard choice of LAN. The migration from SONET/SDH to Ethernet is because of Ethernet's simplicity, interoperability, and cost efficiencies that Ethernet features over SONET/SDH. SONET/SDH bandwidth allocation is rigid while Ethernet is flexible, providing more efficient network utilization for service providers. The advantage is more vivid especially when the emergence of 5G technology and new IoT devices drive the increase in data content. In the terms of network topology, SONET/SDH networks are deployed in fixed ring-based design while Ethernet supports more types of network topologies such as ring, mesh, tree and string-based topologies. In addition, the overall cost of operation and maintenance for Ethernet network is lower than SONET/SDH and the scalability enables easy migration to 100G and beyond.

The advantage of DWDM has been long recognized for its long-distance, ultrahigh-bandwidth transport applications. As the process of deploying optical fiber becomes time-and-cost consuming, Ethernet over DWDM becomes the optimal choice for the growth of high bandwidth demand. DWDM network system can not only carry SDH and other unlimited digital or analog signals, it can be used to provide a variety of services. Based on DWDM technology, the metropolitan area network can take full advantage of the bandwidth resource of optical fiber, greatly improve the system capacity as well as reduce the transmission cost. Compared with CWDM technology, DWDM platforms are capable of handling higher speed protocols, enabling transmission over 100G or 200G per wavelength and migration to 400G and beyond. For metropolitan area network MAN requiring high speed and great channel capacity across long distances, DWDM technology is the ideal solution.

To conclude, with the different 100G metro network scenarios, metro network connections can be varied based on different technologies. Today's metro network benefits a lot from DWDM-based platforms. Nevertheless, as technology develops and more devices are linked together, MAN networks will continue to grow in popularity and more efficient, high-capacity and low-cost platforms are expected to cater to customers’ growing demands.

Jason Paul
Server re-rack is complete! Thanks to Primespec Inc and FS.COM for the great customer service, and a
Jul 29, 2021
 11.4k
Knowledge