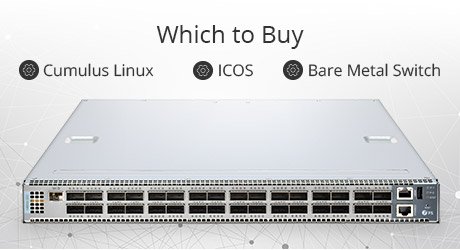 There are many choices for 100G network switches on the market now, such as brite box switch that are preloaded with open source software like Cumulus Linux or ICOS and etc, and the bare metal switch without software. So which should you choose? Here is a 32 port 100G switch provided by FS as an example, to offer a detailed explanation.

FS is hitting the increased bandwidth requirement with the Layer 3 switch, N8550-32C. It’s a 32 port 100GbE QSFP28 switch with high performance and ultra-low latency, which is designed to be deployed as Top-of-Rack (ToR) or Spine switch.

This can greatly simplify the tasks of LAN upgrade to meet the increasing bandwidth demands. With 6.4Tbps, it can handle large amounts of data in a secure topology connecting to backbone or high capacity servers that use audio, video streaming, and multicast applications.

Following are the introduction of the three versions of 100G network switches:

FS N8550-32C bare metal switch has installed ONIE (open network install environment). ONIE is a boot loader that is only run/invoked when installing or uninstalling a new operating system. With ONIE, this Layer3 switch allows users to have various choices of network operating systems, such as OcNOS, PicOS, SONIC, Open Network Linux, Snaproute and so on. This means they can choose the one that they are most familiar with or the cheapest one, to reduce the total cost.

Option 1 and 2 have installed software, which is suitable for users who want the device with direct uses. But note that, Cumulus Linux is a true Linux system that offers the entirety of the Linux experience on the switch for a rich ecosystem of application. While ICOS is developed based on Linux, which can run as a Linux application with seamless integration of Linux tools while offering a server like experience. Besides, they have different CLIs. Cumulus Linux can use Cisco like CLI, but ICOS can not. As for option 3, customers that have target operating systems can choose this one. In addition, price is also an important factor. Cumulus Linux version is the most expensive one, and bare metal version is the cheapest, but users have to pay for the third-party software. So users should make a wise decision according to the specific demands.