Driven by the bandwidth requirements of private and public cloud data centers and communication service providers, 100G experienced significant uptake, making network upgrade a necessary and inevitable trend. This post will give a comparison of 10G-40G-100G and 10G-25G-100G network migration paths to help users make better choices for network upgrades. 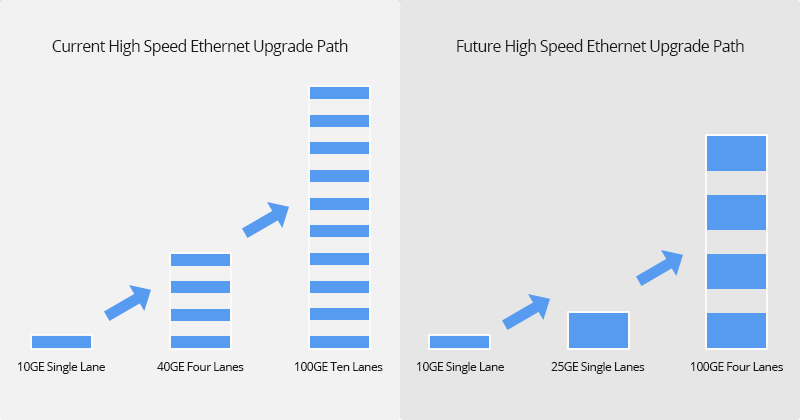 While 100G and beyond is the next major milestone in hyper-scale data center speeds, 40G may yet still have longevity in the industry. Traditional enterprises with tier 2 and tier 3 data centers that have lower density requirements and smaller budgets can reliably leverage the 40G architecture with 10G service speeds as the current building block.

Began in 2008 and approved in 2010, 40G Gigabit Ethernet enables the transfer of Ethernet running on QSFP+ at 40 Gbit/s. 40G switches act as core/spine switches for small and medium enterprises, while as aggregation/leaf switches for data centers. Though 40G has been active on the market for a time, its development faces difficulties. Different from 40G, 100G has done a better job in standard follow-up, technical solution unification and industrial chain development.

In 10G-40G-100G migration path, 10G equipment and cabling systems invested in the past will be utilized. But considering the transceiver modules being used, such a migration path can cost a lot. 40G QSFP+ module is composed of 4 parallel 10G channels and 100G QSFP+ modules support a parallel channel rate of 10×10G. For the single-channel rate is based on 10G, the 10G-40G-100G migration path requires more fibers, resulting in more complicated cabling and higher cost.

On the other hand, when QSFP modules are used in long-distance transmissions, such as QSFP+ LR4 optical module, they integrate 4 channels of 10G into one optical fiber link through wavelength division multiplexing (WDM). It is part of the reason why the cost of QSFP optical modules remains high, especially for 40G modules with a longer transmission distance, such as QSFP+ ER4, which also increases the cost for 100G network upgrade.

Data centers are expanding at an unprecedented pace, driving the need for higher bandwidth between the server and switches. To cater to this trend, networking and the Ethernet industry are moving from 10G to 25G which offers significant density, cost and power benefits for server to top-of-rack connections.

Initially proposed in 2014, 25GbE has been adopted and pushed by companies like Google, Microsoft, Arista, Mellanox, etc. for top-of-rack server networking. 25G network switches are often used as the ToR or leaf switches to connect the servers and terminal equipment, which can support link speeds faster than 10G with no increase in cable/trace interconnect. While keeping pace with the faster and richer growth trajectory of networking bandwidth, no changes in configuration help reduce the power consumption and cost.

The single-channel 25G speed is 2.5 times the transmission efficiency of 10G, while in a 100G network, only 4 channels 25G modules are needed to achieve the 4×25Gb/s mode. This will greatly save fiber links, but this migration path will eliminate the original 10G equipment in the system. This migration has boosted overall system throughput by 2.5x with small incremental costs, for which 25G servers and 100G switches have become ubiquitous in hyper-scale data centers, gradually replacing previous 10G servers and 40G switches. As the Ethernet industry continues to innovate and lay a path to higher networking speeds like 200G and 400G, the 25G-100G upgrade has been developed as an inevitable roadmap for future data centers.

Before the 25GbE specification was released, the 10G-40G upgrade path was predominantly adopted as an option for enterprises, service providers and data centers to scale beyond 10GbE. However, with the emergence of 25GbE, the 25G-100G upgrade path has gained more momentum. What is the difference between 25G and 40G upgrading paths? Should I upgrade 10G to 25G? 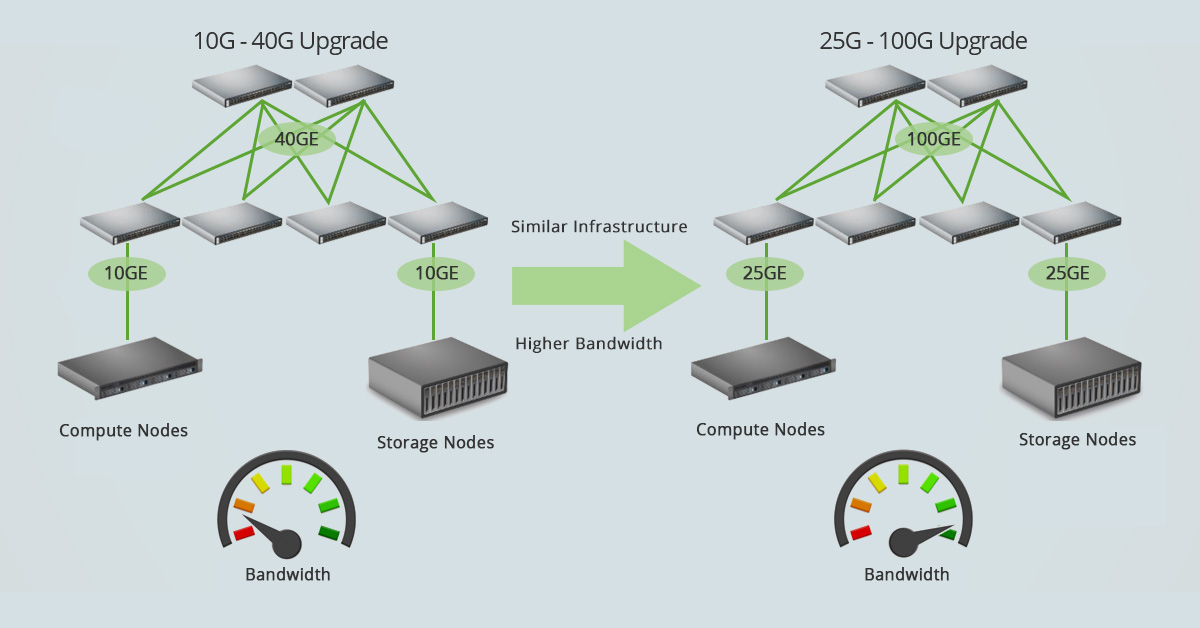 It can be easily found that there are some obvious advantages in the process of 10G-25G-100G migration compared to 10G-40G-100G path:

The most important condition when choosing network migration path is to consider your business scale and future expansion. For the growing needs of the network and long-term benefits, upgrading from 25G to 100G is the optimal way. But there is no need to pursue a 10G-25G-100G migration path while deployed with 40G network and the current network can fit your needs. Of course, by offering more bandwidth and higher port density with reduced power consumption and cost, the 10G-25G-100G Ethernet network migration path overturns the traditional 10G-40G-100G connectivity to improve data center efficiency, thus laying the foundation for further upgrade to 200G and 400G.