10GBASE-T, a type of technology for transmitting data in 10G networking, has been commonly used since its appearance in 2006. How much do you know about it and why is it important? The definition, benefits, applications, FAQs, and the future of 10GBASE-T will be demonstrated in this article.

10GBASE-T or SFP+ RJ45 is a standard released in 2006 to provide 10Gbit/s connections over unshielded or shielded twisted-pair copper cables (Category 6 or above) for distances up to 100m. There are two advantages to adopting 10GBASE-T technology for IT technicians to build data centers and corporate networks. First, when you deploy 10GBASE-T technology in your network, the traditional infrastructure (copper cables, patch panels, and so on) can remain. Second, 10G Copper SFP can provide a cost-effective 10G interconnection by supporting high-density 10G switches.

The merits of 10GBASE-T technology are described as follows:

10GBASE-T / SFP+ RJ45 is applied in the data center or horizontal areas (in building, including wiring closet). And it is not suited for vertical applications within building, or campus & metro applications. For the density of computing devices in the data center, it needs more bandwidth per link and is less constrained by installed base or structured cabling standards. Because of the higher speed aggregation points in wiring closets in horizontal enterprise networks, it needs to conform to structured cabling standards. 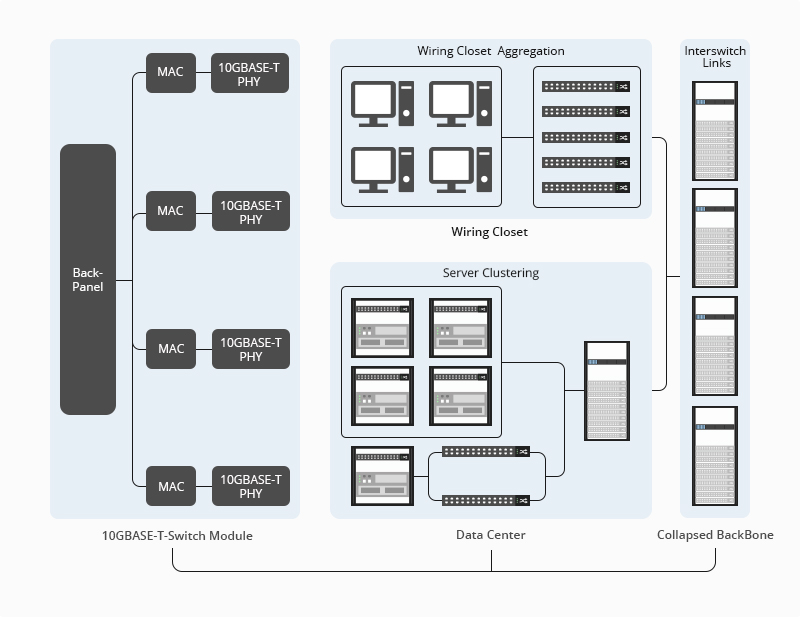 A: 10GBASE-T has been available in servers as an add-in card since 2008. As more and more maturing 10GB Copper SFP products intersected with new server platforms enters market, 10GbE ports have been available either as LAN on Motherboard (LOM) or a configurable daughter card from many server vendors.

A: 10GBASE-T has been available on switches since 2008, and vendors have various 10GBASE-T switches solutions. Its adoption has been fueled by the release of the 40nm 10GBASE-T PHY in 2012. Deployments have been mainly in data centers, although solutions are also available for campus networks.

The Future of 10GBASE-T Technology

Based on greater distance capabilities, lower cabling and ports costs, and easy moves, adds, and changes in the cabling infrastructure, a network switch with 10G Copper SFP ports can offer greater flexibility compared to SFP+ DAC copper cables. Furthermore, Ethernet switches with SFP+ RJ45 ports support a greater number of deployment options, including top of rack, end of row, middle of row, and inter-cabinet connectivity. As server processing and Ethernet-based storage requirements continue to become higher and higher, the demands for 10GBASE-T will grow constantly in the near future. The number of SFP+ Copper connections required will expand beyond 48 ports within a rack.

10GBASE-T vs SFP+ vs DAC: Which to Choose for 10GbE Data Center Cabling?