Aimed at cloud data centers, 25G standard was officially approved in 2016, several years later than 10G, 40G, 100G standards. And the main advantage of 25G lies in the SerDes (Serializer/Deserializer) technology, which is used in high-speed communications for converting serial data to parallel interfaces and vice versa, minimize the number of I/O pins and interconnects.

Most switches run SerDes with a clock rate of around 10Ghz, supporting a 10Gb transfer rate. In recent years, SerDes technology has advanced to 25GHz. This development results in the differences in efficiency and costs of 10G/40G and 25G deployment. Leveraging 25GHz SerDes lane, 25G supports a single lane at 25Gbps, which is 2.5 times the bandwidth performance of 10G using a 10GHz lane. When upgrading from 10G to 25G, rewiring can be avoided as 25G switches use SFP28 transceivers which are compatible with LC fibers of 10G. Moreover, 25G is capable of providing 4 times the switch port density of 40G which requires 4 10GHz lanes. Thus the migration path 10G-40G-100G is inevitably cost-prohibitive while less scalable and efficient. 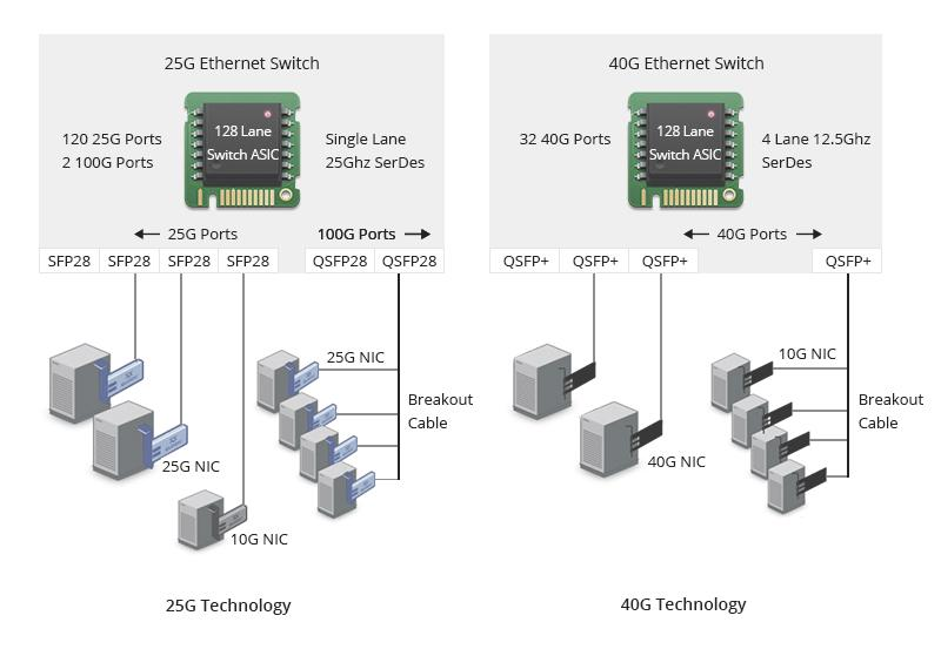 25G stimulates the anticipation of higher transmission rates in the industry, thus 50G standard was launched in 2018 with the same architecture as 400G/200G standard to serve as the next high-speed solution for connecting servers and data centers. 50G deployment can reuse the 25G devices in the existing 100G network so as to reduce the cost. For this reason, the cost of 50G can be half of 40G, but the performance may increase by 25%. While the most important technology for achieving the high performance of 50G is PAM4 (four-level pulse amplitude modulation).

50G reaches 53.125 Gbit/s after FEC encoding, which cannot be transmitted over an electrical interface while maintaining signal integrity, thus PAM4 is adopted to map pairs of bits into a single symbol, making an overall baud rate of 26.5625 Gbaud for 50 Gbit/s per lane. PAM4 is widely used in high-speed signal interconnection, offering higher transmission efficiency at a lower cost compared with earlier non-return-to-zero (NRZ). PAM4 at 50 Gbaud provides a path to 100G via a 1*2*50 Gbaud architecture that requires only one single laser but achieves a ten-fold increase in transmission rate from 10G to 100G.

Catering to the demands of high-speed and long-reach transmission, the first 100G standard was approved in 2010 and tremendous changes were made in later years. It seems that 100G is gradually taking place of 40G in data centers due to better standard follow-up, technical solution unification, industrial chain development, especially the advantage of higher transmission rate and longer distance which is attributed to the DWDM (Dense Wave Division Multiplexing) technology it uses.

100G DWDM technology enables high capacity transmission over a single wavelength across longer distances and it is especially used for high-speed optical communications. Coherent CFP/CFP2/CFP4 DWDM optical transceivers are for 100G MAN (Metropolitan Area Network) or DCI (Data Center Interconnection ) up to 80 km or a long-haul link more than 1000 km, transporting multiple 10G/40G/100G services to satisfy the increasing demand for high bandwidths. In addition, using 100G DWDM transponder/muxponder can avoid the redesign of network architecture while achieving transport capability and smooth transition among 10G, 40G, 100G, as it multiplexes multiprotocol and multi-rate services. 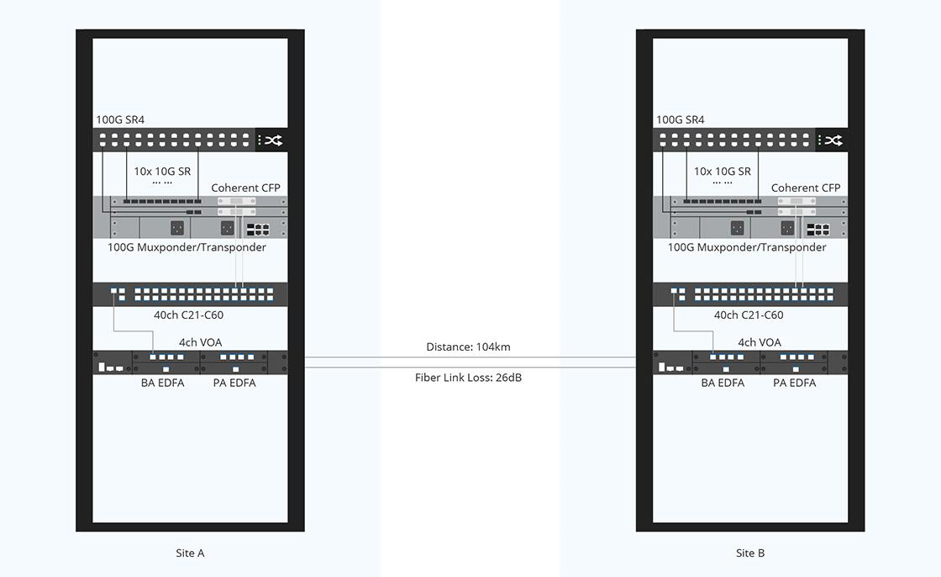 25G/50G/100G all have wide applications in cloud data centers now, and integrating them can achieve the 10G-25G-50G-100G network upgrade. While before the emergence of 25G and 50G, the traditional migration path is 10G-40G-100G, which is more costly but less efficient. By contrast, upgrading from 25G to 100G can be a more cost-effective solution. Based on 25G, this migration path can be achieved by 4x25G or 2x50G SerDes lanes leveraging new leaf and spine architectures. It offers higher transmission efficiency and performance, both CAPEX (capital expenditures) and OPEX (operational expenditures) savings through high backward compatibility and reuse of the existing cabling infrastructure. On the whole, the 25G-50G-100G migration path provides a lower cost per unit of bandwidth by fully utilizing switch port capabilities and also lays the foundation for the further upgrade to 200G and 400G. Read this article for more about the comparison of 10G-40G-100G and 10G-25G-100G migration paths: 10G-25G-100G Network Upgrade: An Inevitable Roadmap for Future Data Centers.

These emerging 25G/50G/100G technologies have well adapted to the diverse needs of the market and led the trend of the industry in turn. It is well received that 25G/50G/100G each have their advantages in cost and performance for adopting more advanced technologies compared with 10G and 40G. While the demands never stop, thus the development of technologies will never stop moving forward either. Network managers are always looking for a balance between speed and reuse technology to find a cost-effective solution. Let’s wait and see what will happen in the future.