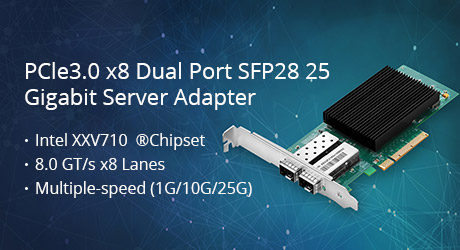 25G and 40G are competing with each other during the upgrading from 10G to 100G in data centers. Increasingly more people are in favour of 25GbE joined by the endorsement of 25G by large cloud providers such as Google and Microsoft, it seems that 25G will finally surpass 40G as the most deployed server with great access speed. Therefore, 25G products keep popping up in the market. One key component in the entire 25G/100G structure is the 25G NIC. This post will shed light on the little flat card.

Network interface card (NIC), also known as the server adapter, is a printed circuit board that provides network communication capabilities to and from a personal computer. It is usually a separate adapter card that can be inserted into one of the server’s motherboard expansion slots. This device works at the physical layer and the data link layer and has a unique physical network address, also referred to as a MAC address. The side plate of the NIC is usually built with an interface. Some server NICs have two or more network interfaces built into a single card like the below one. As is known to all, 40Gb is now at the transition period. However, the bandwidth of 40G network card is too large for the server, and the cost is also relatively high. 25G NIC is exactly what we need at this moment in time. 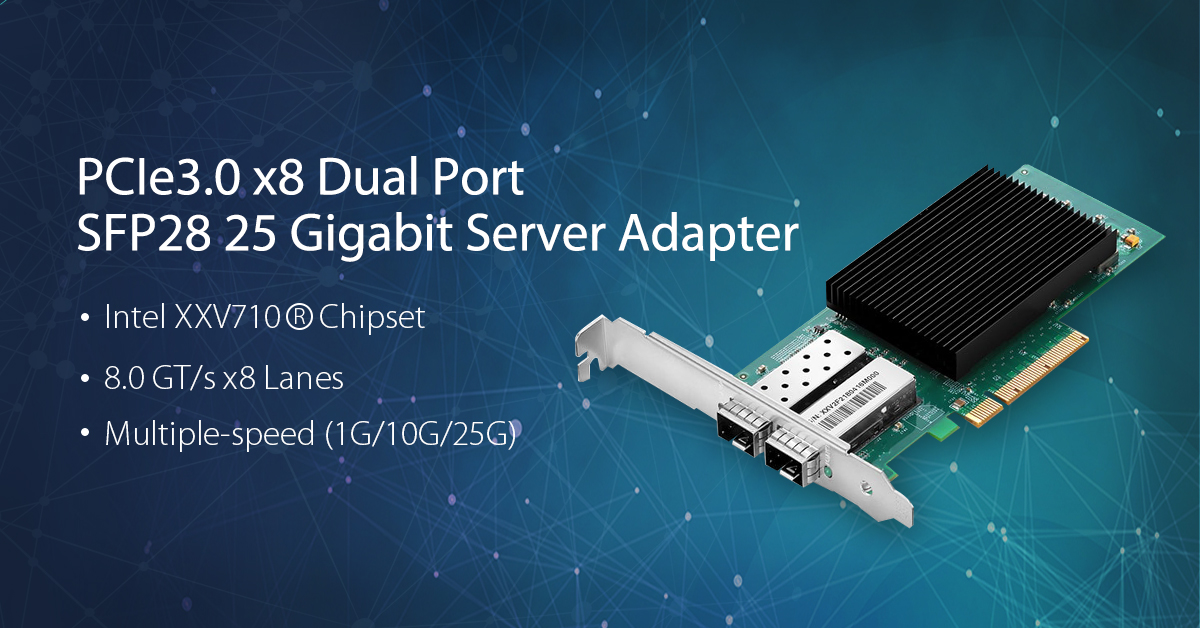 The trend to 25G Ethernet networking is backed by the impressive performance and the cost of 25G Ethernet networking technology. The popularity of 25G server connectivity drives the robust demand for 25G NIC. 25G technology allows more bits to pass through a single strand of copper/fiber cabling. That is to say, 100G migration can be realized by 4 strands of 25G, saving a lot of space and materials compared with 10 strands of cable when used with legacy 10G technology. Besides, it is predicted that 25G Ethernet leaf switch ports should have a less than 10% premium over 10G, while reaching the crossing point in 2019.

In a ToR configuration, 25G ToR switches are placed in the top of each cabinet, connecting directly to the 25G servers in the cabinet via point-to-point cabling. 25G NICs are used in each 25G server. All 25GbE servers can be connected to 25GbE switch ports via 25G DAC/AOC cables or 25G SR transceiver and fiber patch cables. FS 25G NIC also delivers excellent performance for 25GbE connectivity that is backwards compatible with 1/10GbE, making the migration to a higher speed easier. 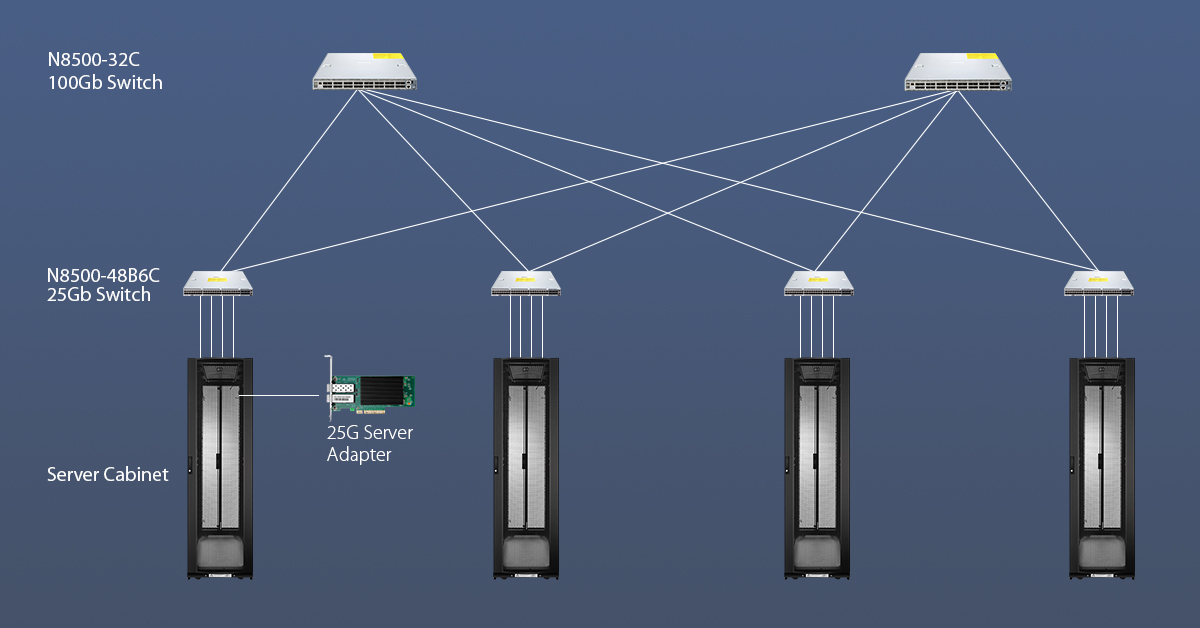 The NIC in a server computer connects many network users to the server. For a heavily used server, it is worth investing more on a higher-quality NIC. Some name-brand manufacturers such as Mellanox, Dell, HPE, Intel, SMC, 3Com as well as FS.COM are competing in this field. Here are some points to consider when choosing an appropriate 25G NIC.

Interfaces or outlets on the card are used to connect the communication media. They accept SFP28 fiber optic transceivers or SFP28 DAC cables for 25G connections. There are 1-port, 2-port, 4-port and even 6-port 25G NICs in the market. These multiple ports are used to access diverse networks, storage, management and so on. Choose the right 25G NIC with certain ports according to your applications.

The interface that the card connects to is also a critical consideration. PCIe (Peripheral Component Interconnect Express) is the recommended interface solution for 25G server adapters as it is a faster solution when compared to ISA (Industry Standard Architecture). However, there are various versions of PCIe, such as PCIe 1.0, PCIe 2.0, PCIe 3.0, PCIe 4.0, among which PCIe3.0 x8 is the popular interface version in 25G NICs from varied manufacturers. It is stated that the number after the x indicates the physical size of the PCIe card or slot, with x16 being the largest and x1 being the smallest. While the number after PCIe is indicating the latest version number of the PCI Express specification that’s supported. PCIe 3.0 is amazingly fast compared to PCIe 1.0 and PCIe 2.0, as it can support a bandwidth of 7.877 Gbit/s per lane (984.625 MB/s). To capitalize on PCIe3.0 x8, your motherboard should support PCIe 3.0 and have a free PCIe x8 slot. So take into consideration the hardware you own or intend to buy before you make decisions.

To fully realize the server adapter function, the card chip is crucial, for the quality of it determines the stability and speed of the card. Large manufacturers choose Intel chipset, which can provide a reliable guarantee for high quality, high stability and high compatibility of NICs. FS PCI Express x8 Dual Port SFP28 25G server adapter is based on Intel XXV710® chipset, compatible with PCIe x16 slot. The server adapter can meet the demand of next-generation data centers by providing unmatched features for both server and network virtualization. By also providing reliable performance in a flexible LAN and SAN networks.

With 2.5X faster performance, 100% better performance-per-dollar, backward compatibility plus a future-proof upgrade path to 100G, the new 25G systems deliver best-in-class TCO for today's agile data centers. The majority of server vendors are offering 25 Gigabit Ethernet NICs as the standard I/O option in their latest 2-socket and 4-socket servers. FS is ready to embrace the 25G/100G technology with a series of 25G products ranging from optical transceivers, network switches to fiber optic cassettes.