Data traffic flowing within data centers are skyrocketing due to the emerging bandwidth-hungry applications like cloud computing, virtualization and Big Data. Hence 40G Ethernet switch has taken over 10GbE switch to underline the network bandwidth bottlenecks facing high traffic services – it is now hitting the most rapid growth, achieving broad adoption in data center markets. Among the various 40G switch port designs, a 32 port 40G switch is believed optimal to handle the data flow for now, and to future-proof network for tomorrow. So what can we expect from a 32 port 40G switch? We are gonna explore this by analyzing the feature sets of 40G switch.

40G switch is fast maturing – 10G and 40G markets have reached a break-even point years ago, and then the later becomes more economical with higher bandwidth and reduced cabling complexity. 40G switch now represents the new high-growth segment and becoming the technology of choice in the data center, which is moving to a generalized deployment phase. Expert even predict that 40G switch deployment will continue to see healthy growth in the years to come. Meanwhile, the industry now works to reduce the cost for 40G switch in order to move the market towards mass adoption. As for data centers, 40G switch can be effectively deployed in aggregation links, and it can be commonly applied to access links to connect servers. When it comes to the innovative “spine-leaf” architecture, 40G switch can act as either spine switch or leaf switch.

FS.com supports 40G QSFP+ interfaces on a broad switch product line, providing data center managers wide and decent solutions. Among which N8050-32Q switch is typically equipped with 32 port 40G QSFP+ ports in a compact 1U form factor – each port can breakout into 4×10G ports, hence up to 128×10G ports are available. N8050-32Q provides superior low latency and power efficiency in a clean PHYless design, and boosts advanced features such as MLAG, VxLAN, SFLOW, SNMP, MPLS etc. As a SDN switch that compatible with OpenFlow 1.3.11 protocol, this 40G switch enables improved programmability and agility by separating data plane and control plane. Together with some advanced feature sets like IPv6, VxLAN/NVGRE, VPC, QinQ, sFLOW, N8050 40G switch allows for rapidly deploying a new service or modifying an existing one. The specification of this 32 port 40G switch is listed below. 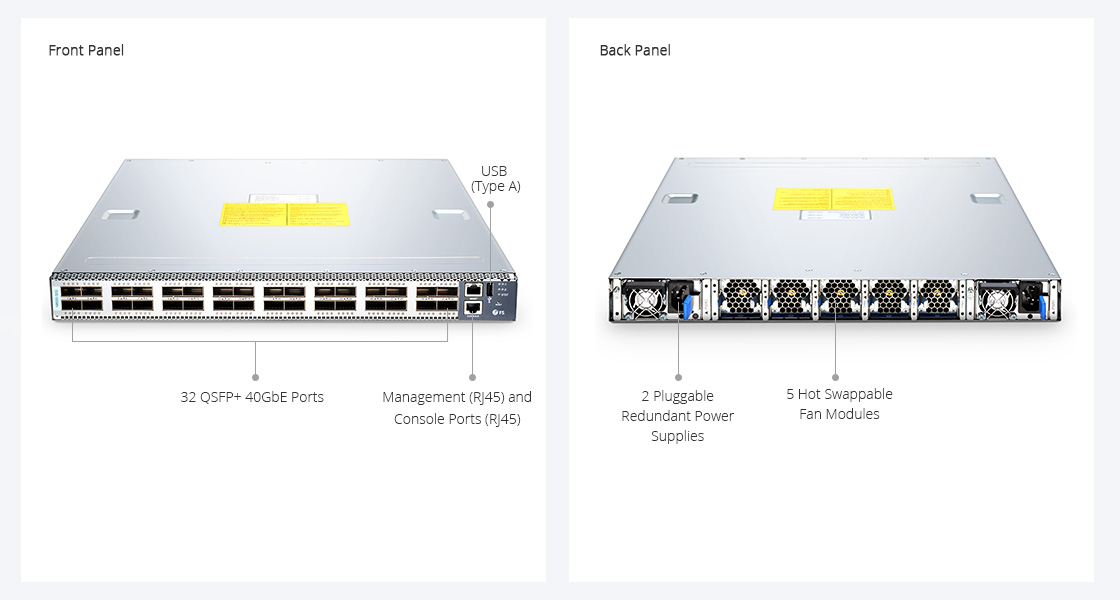 FS.com N8050-32Q 32 port 40G switch comes with two flavors: one is a spine/core switch preloaded with ONIE and the other is a Layer 2/3 SDN switch with ICOS. Let’s see how exactly they differ from each other.

ICOS is a Linux-based network operating system (OS) backed by Broadcom. ICOS software runs on a variety of platforms and is ideal for Layer 2/3 switching solutions for data center. It is a solid, programmable and most widely deployed OS suited for enterprise and data center, enabling seamless integration to Next Gen Open programmable networks. Moreover, ICOS supports easy configuration and management through open source server based tools. And it offers full industry standard CLI and linux command shells for configuration management. Meanwhile, ICOS also boost advance feature-sets for enterprise and data center, all in one common code with a choice of Linux, Industry standard CLI or programmatic interface.

ONIE refers to Open Network Install Environment for bare metal network switches, providing an environment for network OS installer discovery and execution. ONIE gives end users the freedom to choose from different network operating systems, and install it as part of data center provisioning. Automated mega-scale OS and hardware provisioning is now possible. ONIE enables a thriving ecosystem of both network hardware and operating system alternatives. N8050-32Q switch preloaded with ONIE allows clients to apply your target network OS for now, to change it when need occurs, and only with minimum effort.

Which 40G Switch to Choose?

The three variants of 40G switch are based on the same network hardware device, and both supports current and future data center requirements, including an x86-based control plane for easier integration of automation tools, an ONIE installer for 3rd party network operating systems and compatibility with Software Defined Networks via OpenFlow 1.3.11. They also support the advanced hardware based VXLAN feature to support over 16M virtual networks.

The major difference lies in the software choice. Option 1 and Option 2 have been installed with open source software. Users can receive tech support from FS and the software vendors. But note that, Cumulus Linux uses automation tools like Ansible to manage network infrastructure and configurations. This can greatly reduce OPEX and increase operation efficiency. While ICOS is a CLI-oriented network OS with the full layer 2 and layer 3 feature set of the Broadcom data plane. Option 3 with ONIE installer create a flexible installation environment, so users can opt for a 3rd party network OS that based on their own preference. This helps avoiding vendors lock-in while successfully enhance network agility. So if you already have a target network OS, just get 40G switch with ONIE as a bare metal switch then install the OS you desire. Or if programmability is critical for your business growth and traditional method of management is no longer adequate to scale at the rate required, 40G switch with Cumulus Linux or ICOS could be the best fit.

Here are some frequently asked questions towards N8050-32Q 40G switch. We explain each to help you get a better understanding of its features and functions.

1. Does this switch support SDN and OpenFlow version 1.3?

Yes. N8050-32Q 40G switch supports current and future data center requirements, including a x86-based control plane for easier integration of automation tools. It is a SDN switch that based on SDN protocol OpenFlow 1.3.11. It is critical to the future of OpenFlow-enabled networks. The features that are enabled in version 1.3.11 are very important in datacenter and campus networking: IPv6, Quality of Service (QoS), and support for service provider Q-in-Q tunneling. Except this one, all of our N-series switches are compatible with OpenFlow 1.3.11.

2. Do the switches support any Network operating system?

Option 3 (#107079) with ONIE supports the installation of compatible network operating system software, including Cumulus, ICOS, IP Infusion and etc. Option 1 and option 2 have been installed operating system. But if you insist to install other network OS on them, you have to remove the preloaded software – which is irrevocable once you did this.

The ongoing bandwidth demand pushes the network bounds of higher speeds, massive scalability and greater scalability. 40G switch smooths off the challenges concerning network exhaust and is seeing broad deployment in data center and enterprise network. 40G switch market is fast maturing and is expected to ramping up in the following years. If you still hesitate whether to make the step to 40G switch, welcome to contact FS via sales@fs.com for solutions.