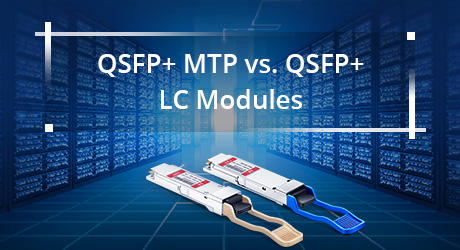 Since 40 Gigabit Ethernet has been deployed in most data centers, a variety of network devices designed for 40GbE links are available on the market. 40G transceivers is bound to be an indispensable component. Generally speaking, there are two interfaces adopted by 40G QSFP+ transceivers—MTP/MPO and LC. Then QSFP+ MTP vs QSFP+ LC transceivers: what are their differences?

The connector type that attached to both ends of the patch cords is decided by the interface of the 40G transceivers. Normally speaking, 40G QSFP+ transceivers for short-transmission distance are equipped with MTP interfaces, and LC interfaces are employed for long-transmission distance. The specific modules and some exceptions will be meticulously introduced in the second part.

40G QSFP+ MTP modules are QSFP+ transceivers with MTP interfaces, which are collocated with MTP/MPO cables. MTP is an enhanced version of generic MPO (multi-fiber push-on), and they are called interchangeably. In most cases, we'll just use "MTP" for convenience. 40GbE QSFP+ MTP modules typically connect with 8 or 12 fibers MTP cables that are terminated with 12-fiber parallel (female) MTP connectors.

QSFP+ MTP vs QSFP+ LC Transceivers: What Are Their Differences?

40G QSFP+ LC transceiver—On the transmit side, 4-channel 10G serial data streams are passed to laser drivers. The laser drivers control directly modulated lasers (DML) with wavelengths. Then the output of the four DMLs is optically multiplexed to a fiber cable through an LC connector, combining as a 40G optical signal. On the receive side, the 40G optical signal is demultiplexed into 4 individual 10G channels with different wavelengths. Each wavelength light is collected by a PIN and then outputted as electric data after amplified by a TIA (transimpedance amplifier). Unlike 40G QSFP+ transceivers with MTP interfaces, 40G QSFP+ transceivers with LC interfaces cannot be split into 4x10G as they use 4 wavelengths on one pair of SMFs.

Single mode fiber (SMF) has much tighter tolerances for optics used. The core is smaller and the laser wavelength is narrower, which means that SMF has the capability for higher bandwidth and much longer distances in transmission. 40G QSFP+ transceivers that have LC interfaces are typically used in data transmission over long distances via SMFs, except that 40GBASE-BiDi transmits data with an LC interface over short distances (100 m@OM3; 150 m@OM4) via multimode fiber (MMF).

MMF uses a much bigger core and usually uses a longer wavelength of light. Because of this, the optics used in MMF have a higher capability to gather light from the laser. 40G QSFP+ transceivers with MTP interfaces are generally deployed for short transmission via MMFs, except for 40GBASE-PLR4 and 40GBASE-PLRL4, they support long-distance transmission over SMFs.

The table below summarizes the cable type, the connector type, and the max. transmission distances of nine common QSFP+ types (Note: 40GBASE-UNIV can operate with both MMF and SMF).

QSFP+ MTP vs QSFP+ LC transceivers: What Are Their Matched Patch Cables?

The aforementioned nine transceivers are available in short or long 40G transmission, such as 40GBASE-SR4 (for short reach) and 40GBASE-LR4 (for long reach). MMF is suggested for 40G QSFP+ short transmission distance, while SMF is advisable for 40G QSFP.

Note: The polarity must be considered when selecting MTP cables for 40G QSFP+ MTP modules. There are three different MTP array patch cords defined in the TIA standard—Type A, Type B, and Type C used for the three different connectivity Methods A, B, and C respectively. For your reference, here offers another article that is informative and exhaustive about MPO polarity: Polarity and MTP Technology in 40/100G Transmission.

There are MTP and MPO cables available in the market, what's the difference and how can I choose for 40G QSFP+ MTP?

MPO stands for "multi-fiber push on." While MTP is a brand name for MPO connectors manufactured by US Conec, which is incomplete compliance with MPO connectors. FYI, all MTPs are MPOs but not all MPOs are MTPs. Both MTP and MPO connectors are feasible solutions, but MTP is an enhanced version of MPO with minor price differences. Normally, MTP patch cords are recommended.

Can a 40GBASE-UNIV QSFP+ transceiver working on the wavelength of 850nm be used with OM1 patch cords?

The answer is yes, but not suggested. The transmission distance and quality would be limited by using OM1 with 40G QSFP+ transceivers. OM1 patch cords are normally suggested for 100Mbps and 1000Mbps transmission. In this case, the two optimized multimode fiber optic cables for short distance—OM3 and OM4 are more suitable.