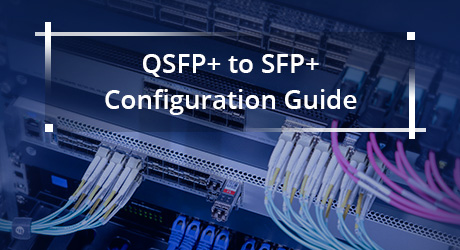 Today, QSFP+ to SFP+ Configuration serves as a common way to achieve network upgrade from 10G to 40G, which is the current trend in enterprise networks and data centers. Splitting 40G into four 10G is a feasible solution of connecting 10G and 40G Ethernet switches, as it can fully utilize the existing devices, saving costs and simplifying configuration for enterprises or data centers. Therefore, you can choose suitable 40G QSFP+ breakout cables based on your necessity to split a 40G QSFP port into four 10G SFP+ ports. In this article, we will provide a guide of 40G QSFP+ to 10G SFP+ configuration using direct attach cables (DAC), active optical cables (AOC), and MTP-LC breakout cables together with 10G/40G transceivers respectively.

Considerations for QSFP+ to SFP+ Split

Usually, this split configuration is supported on most switches provided by different vendors regardless of standalone and stacked ones. Certainly, you still need to check this function in the instruction of your switch or consult your vendor, as it’s the most basic condition of splitting QSFP+ to SFP+ configuration. Sometimes, most ports on a switch support split, but some don’t. In other cases, when a switch is deployed as a leaf switch, some ports do not support the split. Or when the port is already used as a stack port, this may also limit split configuration. Thus the conditions can be quite different based on your applications.

Additionally, before you can split the QSFP+ port into 4x10G ports, you should first make sure the 40G port is in a default configuration and also removed from other L2/L3 feature configurations. Because when the split is in process, the QSFP+ port is still available until you reload the system. Thus reloading is a must after issuing the CLI for the change to take effect.

As previously mentioned, there are several commonly-used QSFP+ to SFP+ cables for choices. Now we are going to illustrate their differences and advantages.

Using 40G QSFP+ to 4x10G SFP+ DAC or AOC is basically the same way, as they have similar forms and usages. They are both composed of a QSFP+ connector at one end and four individual SFP+ connectors at the other end. The QSFP+ connector offers four parallel, bidirectional channels and each operates at up to 10 Gbps, and it can be directly plugged into the QSFP+ port on the switch. One main difference between the two types of cable lies in the transmission distance, which results from the difference in the transmission media - copper for DAC and fiber for AOC. Therefore, the transmission distance of DAC is usually shorter than that of AOC.

In 40G-10G split connections, both 40G QSFP+ to 4x10G SFP+ AOC and DAC can be used to connect the switches directly, which means no more transceiver modules are needed, so as to save costs and simplify the connection. However, the biggest disadvantage lies in the limited transmission distances, which means this DAC or AOC may be more suitable for connections within a rack or between two close racks.

While, there is also a special type of AOC called 40G QSFP+ to 4 duplex LC AOC breakout cables with a QSFP+ connector at one end and four LC connectors at the other end. This can be also used in the split with the QSFP+ transceiver directly plugged into the 40G port and LC connectors plugged with four SFP+ transceivers. This usage is different from 40G QSFP+ to 4x10G SFP+ AOC, as these LC connectors can be connected with many other types of Ethernet devices, which can well meet diverse needs.

MTP to 4x LC breakout cable is composed of an 8-fiber MTP connector for 40G QSFP+ at one end and 4 duplex LC connectors for 10G SFP+ at the other end. And each fiber cable transmits at 10Gbps. This type of cable is suitable for high-density networks and can reach a much longer distance than DAC and AOC. Using MTP to 4x LC breakout cable, together with a 40G QSFP+ SR4 module and four 10G SFP+ SR modules can realize the 40G to 10G connection. This method can be much more flexible, as LC connectors can be connected with different devices.

Example of QSFP+ to SFP+ Configuration

The configuration command is presented as following:

4. Delete of interface FortyGigE1/0/49, and then exit the system mode and save the configuration.

5. Reboot the switch to enable the change. After the reboot, the 40G port light turns yellow, which means the 40G-10G split configuration is successful.

6. Display the brief information of interface(s) and check whether the interface 1/0/49 configuration is successful.

Note: The four 10G interfaces are all "up", meaning the configuration is successful. Then, the whole CLI command procedures of 40G-10G connection are finished.

Splitting QSFP+ to SFP+ configuration is a practical solution for 40G to 10G connection. But before the split, you need to choose some switches and ports that support the split, as well as compatible transceivers. Using 40G QSFP+ to 4x10G SFP+ DAC and QSFP+ to 4x SFP+ AOC cable are more cost-effective but have limited transmission distances. While the use of MTP to 4x LC breakout cable is suitable for longer distances but more expensive. You can choose a suitable method based on your specific needs.

How to Convert a Port From QSFP+ to SFP+ Port?