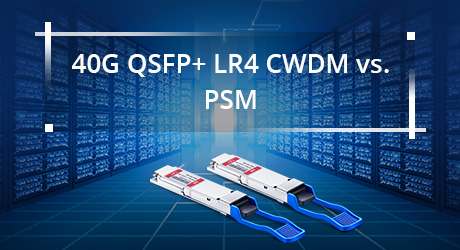 QSFP+ transceiver, the updated version of QSFP (Quad Small Form-Factor Pluggable), is known by providing four 10-Gigabit transmit and receive channels in a single pluggable optical module for an aggregate bandwidth of 40 Gbps. It’s nowadays widely adopted to provide high-density and low-power 40 Gigabit Ethernet connectivity. Based on the root of QSFP+ transceiver, types of 40G transceivers have been bred, such as QSFP+ 40G LR4 CWDM and 40G PSM LR4. In this post, a comparison between QSFP 40G LR4 CWDM and 40G LR4 PSM will be explored.

Before the comparison, it’s necessary to go through some basics of CWDM and PSM:

CWDM (Coarse Wavelength Division Multiplexing): As one type of WDM, CWDM is used to combine multiple signals on laser beams at various wavelengths for transmission along with fiber optic cables. It is typically deployed in point-to-point topology in enterprise networks and telecom access networks.

PSM (Parallel Single Mode Fiber): It is a technology that enables signals transmitted or received over four parallel fibers in each direction rather than over multiple channels on a single fiber.

QSFP-40G-LR4 CWDM transceiver commonly refers to the QSFP+ 40G LR4 transceiver. With a duplex LC interface, QSFP+ CWDM LR4 is compliant to 40GBASE-LR4 of the IEEE P802.3ba standard. It contains four unbiased transmit and receive channels, with each channel carrying a 10G optical transmission. The maximum transmission distance of this QSFP+ transceiver type is 10 km. To minimize the optical dispersion in the long-haul system, the single mode fiber (SMF) has to be used.

This QSFP-40G-LR4 CWDM transceiver works by converting 4 input channels of 10G electrical data to 4 CWDM optical signals by a driven 4-wavelength distributed feedback (DFB) laser array, and then multiplexes them into a single channel for 40G optical transmission, propagating out of the transmitter module from the SMF. Reversely, the receiver module accepts the output of 40G QSFP CWDM optical signal and demultiplexes it into four 10G separate channels with different wavelengths.

The central wavelengths of the 4 CWDM channels are 1271, 1291, 1311 and 1331 nm, which comply with CWDM wavelength grid defined by ITU-T G694.2. Each wavelength channel is collected by a discrete photodiode and output as electric data after being amplified by a trans-impedance amplifier (TIA).

QSFP-40G-LR4 PSM is also named as QSFP-40G-PLR4 by some vendors like Arista and FS. Equipped with an MTP/MPO fiber ribbon interface, the LR4 PSM QSFP+ transceiver offers 4 independent transmit and receive lanes, each capable of 10G operation up to 10 km over single mode fiber.

QSFP-40G-LR4 PSM works in a way that the transmitter module accepts electrical input signals compatible with common mode logic (CML) levels. Then the receiver module converts parallel input signals via a photodetector array into output signals. The output signals of the receive module are also voltage compatible with CML levels. Usually, there are guide pins inside the MTP/MPO interface receptacle for proper channel to channel alignment. In that case, when users plug an optical cable with the MTP/MPO connector into a QSFP+ transceiver receptacle, the cable cannot be twisted in case of alignment failure.

As 40G QSFP+ transceivers, both 40G LR4 CWDM and PSM are used for long-distance transmission. However, in the aspects of optical transmitter (optical Tx), optical MUX/DEMUX, interface, and fiber, they have different features as listed in the following table.

Can QSFP-40G-LR4 CWDM and PSM Transceivers Be Used for 4x10G?

It depends on your QSFP+ transceiver type. When you use the QSFP-40G-LR4 CWDM transceiver, it cannot be split into 4x10G. That’s because it uses 4 wavelengths on a pair of single mode fiber with LC duplex interface, and does not allow itself to split into 4 pairs without substantial complexity to split out the wavelengths. However, if you use a QSFP-40G-LR4 PSM transceiver, the answer will be different. 40GBASE-LR4 PSM QSFP+ transceiver can be used for 4x10G, because it uses parallel (ribbon) fiber with MTP/MPO interface, which allows the creation of 4 fiber pairs.

What Are the Differences Between QSFP+ CWDM LR4 and LX4/ ER4 Transceivers?

Their differences are mainly caused by their supported cables and transmission distances. QSFP-40G-LR4 CWDM is used to support up to 10km link distance over the single mode cable. LX4 CWDM QSFP+ transceiver is designed to support up to 2km (SMF) and 150m (MMF) optical communication applications. And QSFP+ 40G ER4 CWDM transceiver supports the link length of up to 40 km over SMF with the duplex LC interface.