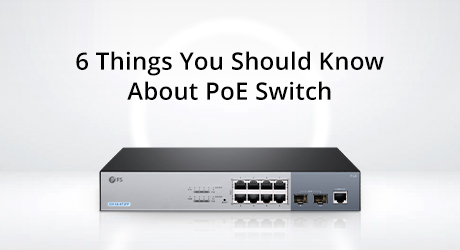 6 Things You Should Know About PoE Switch [FAQ]

With the 10Gb PoE switch being widely used and 25Gb PoE switch coming into view, PoE switches are gaining more popularity. However, at the age of wireless network, PoE switch seems like a little bit old school for people who always chase the latest network technology. Nevertheless, the historical position in network technology of PoE switch is irreplaceable and undeniable, and it still plays a significant role in network communication technology. Due to the power supply and information transmission advantages of PoE switch, people have started to widely layout 10Gb PoE switch, but some people in the market still have skepticism about it. The article will expand on some frequently asked questions of PoE switch.

Do PoE Switches Slow Down Speed?

The answer is no. From the theoretical perspective, supplying power on the network cable will not affect the transmission speed of Ethernet network signal. In a cable cat 5, there are 4 pairs of twisted copper wires. But in 10M BASE-T and 100M BASE-T, only 2 pairs of wires are used for data transmission, the other two pairs of wires are not used. PoE uses these four wires to provide low-voltage DC power to any access points or other devices you connect. For data and power, it uses different wires, so it will not affect the speed. In a Gigabit Ethernet connection, 4 pairs of wires are used for data and power transmission at the same time, which can be done because the signaling in Ethernet is transformer coupled. The DC power supply is added to the midpoint of the transmission transformer, which does not affect the data transmission. Thus, PoE switch won't slow down speed. Thus, PoE switch won't slow down speed. Actually, the Internet speed is drastically affected by your ISP, the Internet backbone, the remote website server, traffic on your local node, and more. 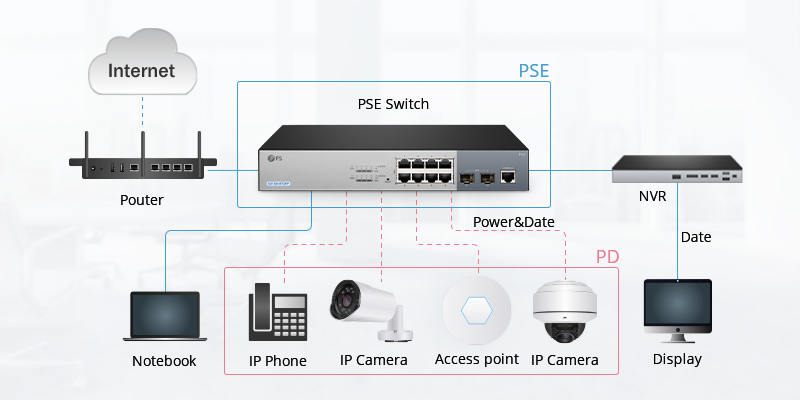 Do PoE Switches Only Support Speed Below 1G?

If it were a few years ago, the answer to this question might be yes. But now PoE switches have developed to the point where multiple transmission speeds can be selected. PoE switches with 10Gb Ethernet ports are available now. FS 10G PoE Switches support 24x 10GBase-T ports and can offer power to 10G NAS, which can meet most people's requirements.

Regarding the price of the switch, the price of the PoE switch is higher than that of the ordinary switch. But in the long run, PoE switches will help you save money. FS S5500-48T8SP is a 48-port PoE switch, which allows power transmission through all 48 ports. By integrating the power supply into the switch, the PoE switch eliminates the need to purchase a power injector, which can save hundreds of dollars in power costs. In addition to cable costs and outlet costs, the installation cost is relatively low because the installation is quite simple, and you don’t need IT teams to do the job. This is why PoE switches are recognized as cost-effective.

Do PoE Switches Have Limited Application?

The answer is no. It might be correct if you are saying PoE switch of earlier time has limited application. But the current PoE switch is applied much more wildly. The latest version IEEE 802.3bt increases the power available to a PD to 90 W. The semiconductor industry is actively reducing the power consumption of individual transistor. That means integrated device manufacturers (IDM) can do more with less power. And there is more power available for a PD. With less power, PD can do more job. Thus, with larger power budget and higher efficiency, it is no exaggeration to say that PoE switch has more applications.

The answer is no. It's understandable for engineers to worry about the power dissipation problem since the signal integrity and power consumption is quite important. However, with the IEEE 802.3 specifications, PoE switches can meet the requirements of most engineers. For example, the IEEE 802.3bt specification mandates that delivering 90 W of power require the use of all four twisted pairs within the cable. The maximum cable length is 100 meters. When using only two twisted pairs (pair set) to deliver power, the maximum DC loop resistance of the pair set shouldn’t exceed 12.5 Ω, which is guaranteed by using a Category 5 cable or higher. Thus, there won't be any issue of power dissipation if the cable requirements are met. If you want more details, you can click the article: PoE Switch Power Consumption: More Electricity Cost?

To meet the demand for higher power, the IEEE released a new PoE standard at the end of 2018, to significantly increase capacity. IEEE 802.3bt allows for up to 60 W to 100 W of power at the source. At this time, some users may be concerned about whether the new standard requires new equipment. The answer is no. If you are a related industry practitioner, you might know that backward compatibility is quite essential, which is a property of a system, product, or technology that allows for interoperability with an older legacy system, or with input designed for such a system, especially in telecommunications and computing. The IEEE 802.3bt specification is fully backwards-compatible with IEEE 802.3af (12.95 W at the PD) and IEEE 802.3at (25.50 W at the PD), which allows a mixture of PoE standards to coexist in the same network. Therefore, the new equipment is not necessary.