An Overview of Available PDU Types in the Market

The PDUs (Power Distribution Units) with some basic functions were sufficient for most power distribution needs back when the data centers were called data rooms. Witnessing the constant update of power systems, many IT designers are seeking new PDU solutions with more functions that will meet the demands of modern data centers. A variety of PDUs in the market are available to satisfy various needs. This article will help you to classify the PDU types based on their functions, power phases, and installation methods.

According to Functions: Basic vs Intelligent PDU

As a dependable, space-saving, user-friendly, and cost-effective solution, a basic PDU provides reliable unfiltered power distribution from a UPS (Uninterrupted Power Supply) system, generator, or utility source to multiple devices like equipment racks, wiring closets, server rooms, etc. Adopting basic PDUs will benefit the original UPS system with more outlets, which essentially converts a single high-amperage UPS outlet to multiple low-amperage PDU outlets. However, these basic PDUs are unable to surge suppression or line filtering that could interrupt the flow of power to connected equipment in order to ensure the availability of the power.

Aside from the basic powering functionalities, an intelligent power distribution unit (iPDU) provides a variety of functions like real-time power monitoring, environmental monitoring, and data center infrastructure integration, etc., which help to increase the efficiencies of data centers. Adopting intelligent PDUs will enable the network architects to design smarter IT infrastructures. Here is the division of the intelligent PDUs covering the common types in the market.

Differences Between Basic and Intelligent PDUs

The most distinctive difference between basic and intelligent PDUs is their functions. Basic PDUs are reliable power distribution devices, like the larger version of power strips sharing some basic characteristics. Conversely, intelligent PDUs with various functions have performance advantages for connecting the real-time data for wiser decisions, maximizing the uptime for higher performance, reducing energy consumption and operation costs for better budget, and reducing carbon footprints by providing optimal control over AC, heat, and humidity for green data centers.

Due to the abovementioned function diversity, intelligent PDUs are significantly more expensive to purchase and implement than their basic counterparts. However, the operating costs may be saved on the condition that they are designed for smarter data center management.

Furthermore, the differences in their functions will also affect the applications of these two categories of PDUs. For some small-scale and simple application scenarios, there is no need to be equipped with intelligent PDUs. Basic PDUs may offer a cost-effective solution to this target audience. If rigorous monitoring of the power is critical in most of the high-density cabling systems, picking intelligent PDUs will be optimal.

According to Power Phases: Single-phase vs Three-phase PDU

The differences between a single-phase PDU and a three-phase PDU are mainly in three factors—power, organization, and application.

Single-phase PDUs that are used in a single-phase power system are mostly found in residential settings that have small workloads instead of large-scale data centers. If you are operating a large data center that is carrying heavy workloads, a three-phase power distribution system is evidently more suitable.

According to Installation Methods: Horizontal vs Vertical PDU

Horizontal PDUs are installed in the rack and take up one or two rack spaces (1U-2U). Due to their smaller size, horizontal PDUs have fewer outlets. Whereas the vertical PDUs features a bigger outlook that can have up to 40 outlets. They fit on the upright rails of a rack enclosure without taking horizontal mounting space away from other equipment. 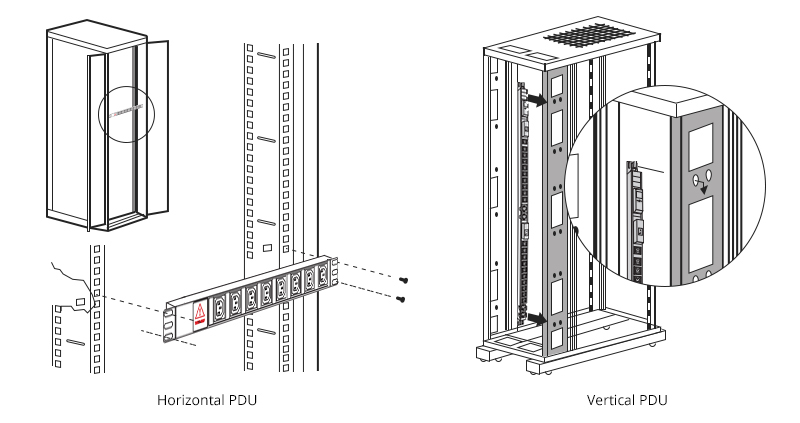 For a high-density data center, an inch of land values an inch of gold. Obviously, the vertical PDUs provide a space-saving solution and tend to become nearly ubiquitous in today's data centers. Horizontal PDUs still provide effective choices: If the power loads are lower, or in order to protect the power through in-row UPS equipment, some may already be distributed from the U-space of the cabinet. In this situation, a series of horizontal PDUs is fit for this situation. In addition, the rear of the cabinet is off-limits in most cases, so to clear space for airflow, cable management must be as well-ordered as a circuit board. In this situation, moving the rack PDU out of the vertical cabling space and into the horizontal space will create a place for cable management.

The IT architects are dedicated to deploying rack PDUs that are capable of supplying multiple circuits, higher voltages, and higher currents to accommodate the increased power distribution demands. Various types of PDUs have been introduced in this article, which may help you to determine your choices based on your needs. If you are considering purchasing some rack PDUs for your data centers, PDU Buying Guide may further give you some inspiration.