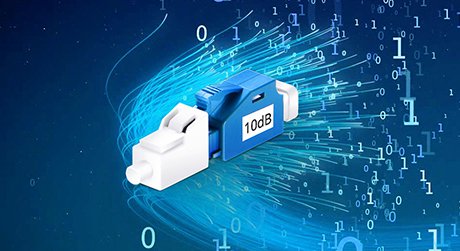 What Are Fiber Optic Attenuators?

The reflective principle, or scattering, accounts for a fraction of power loss in optical fiber and also results from the imperfections of optical fiber. But in this case, it causes the signal to scatter. The scattered light inserts interference in the optical fiber, thereby reducing the amount of transmitted and received light. This principle can be employed in the planned attenuation of a signal. The material used in the fiber optic attenuator is manufactured to reflect a known quantity of the signal, thus allowing only the desired portion of the signal to be propagated.

How Many Types of Fiber Optic Attenuators Are There?

Fixed attenuator, as the name of which has indicated clearly, is designed to have an unchanging level of attenuation in optical fiber, expressed in dB, typically between 1dB and 30dB, such as 1dB, 5dB, 10dB, etc. Fixed optical attenuators may use a variety of principles for their functioning. Preferred optical attenuators often use either doped fibers, or misaligned splices, or total power while non-preferred attenuators often use gap loss or reflective principles.

As shown in the figure below, fixed value attenuators consist of in-line type and connector type. In-line type looks like a plain fiber patch cable. The in-line type optical attenuators are incorporated into patch cables. Connector type attenuator looks like a bulkhead fiber connector. Usually, it has a male plug connector at one side to allow fiber attenuator to be plugged directly into receiver equipment or adapters in patch panel, and at the other side there is a female type fiber optic adapter to allow the patch cords to plug in. There are also female to female optical attenuators, which can be used as adapters and attenuators at the same time. Their applications include telecommunication networks, optical fiber test facility, Local Area Network (LAN) and CATV systems.

Optical variable attenuator, or variable optical attenuator (VOA), generally uses a variable neutral density filter. VOA is generally used for testing and measurement, but it is also widely adopted in Erbium-Doped Fiber Amplifier (EDFA) for equalizing the light power among different channels. It has advantages of being stable, wavelength insensitive, mode insensitive, and offering a large dynamic range.

When to Use Fiber Optic Attenuators?

Attenuators are used when the signal arriving at the receiver is too strong and may overpower the receiving elements, and attenuators can be used for testing the power level margins. Overall, there are two scenarios where optical attenuators can play their roles:

How to Use Fiber Optic Attenuators in Data Link?

For single-mode applications, especially analog CATV systems, the most important parameter after the correct loss value is return loss or reflectance. Many types of optical attenuators (especially gap loss types) suffer from high reflectance, so they can adversely affect transmitters just like highly reflective connectors.