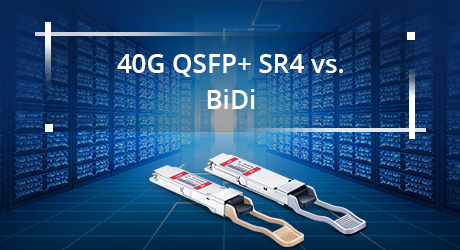 There are four major QSFP+ transceiver modules designed for short-distance transmission (＜1km): 40GBASE-SR4, 40GBASE-BiDi, 40GBASE-CSR4, and 40GBASE-UNIV. The first two are the most commonly used modules among them. After finishing this article, you will figure out what QSFP-40G-SR4 & QSFP-40G-SR-BD are and the differences between them, which may help you to deploy 40G network wisely.

QSFP-40G-SR4 transceiver for 40G connection is in a QSFP+ form factor, which supports link lengths of 100 meters and 150 meters on laser-optimized OM3 and OM4 MMFs (multimode fibers) respectively. For a 40G connection, it enables high-bandwidth 40G optical links over 12-fiber parallel fiber terminated with MTP/MPO female connectors. The 4x10G connectivity can be achieved using an external 8-fiber parallel to 2-fiber duplex breakout cable, like MTP to LC breakout cable.

40G BiDi transceiver, known as QSFP+ bidirectional transceiver, operates over two different wavelengths to transmit and receive in both directions over one strand MMF by adopting WDM (wavelength division multiplexing) technology. Also served as a short-reach optical transceiver, QSFP-40G-SR-BD transceiver can reach 100 meters over OM3 or up to 150 meters via OM4.

Through the above-mentioned introduction, it's effortless to conclude that both QSFP-40G-SR4 and QSFP-40G-SR-BD work through MMFs with transmission distance up to 150 m. After learning the working principle of both modules in this part, the differences will be revealed accordingly.

The Working Principle of QSFP-40G-SR4

The Working Principle of QSFP-40G-SR-BD

Unlike QSFP-40G-SR4, QSFP-40G-SR-BD has four 10Gbps signal channels which are converted to two bidirectional channels of 20Gbps signals. The two channels transmit and receive simultaneously on two wavelengths over a single MMF strand, enabling an aggregated 40Gbps link over a two-strand multimode fiber connection. The following picture shows the technology concept of QSFP-40G-SR-BD transceivers.

In an unstructured cabling system, devices are connected directly with fiber cables. This direct-attachment design can be used to connect devices within short distances in a data center network. For 10G direct connections, 10GBASE-SR SFP+ transceivers operate over MMFs with LC connectors. However, an MTP cable is what two QSFP-SR4-40G transceivers need in a direct connection. Thus, upgrading from 10G unstructured cabling to 40G is not straightforward if using QSFP-SR4-40G modules. The direct connection between two 40Gbps devices can also be provided by duplex LC MMF cables with QSFP-BD-40G transceivers at two ends, which means QSFP-BD-40G modules can reuse the existing cables when conducting 10G-40G migration. Zero-cost cabling migration from direct 10Gbps connections to direct 40Gbps connections will be realized effortlessly. 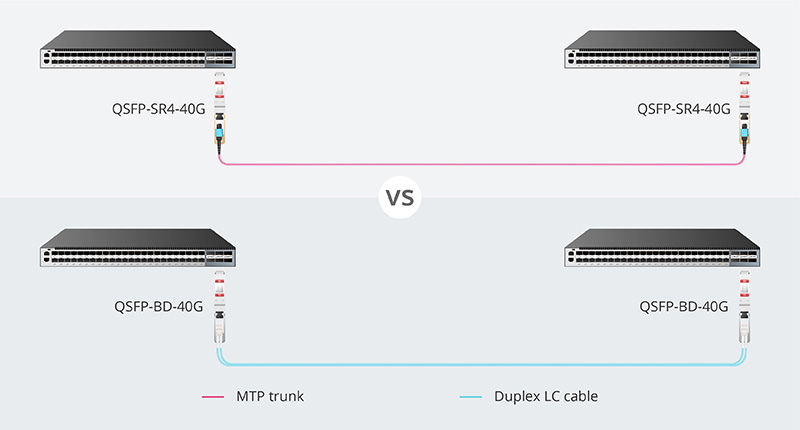 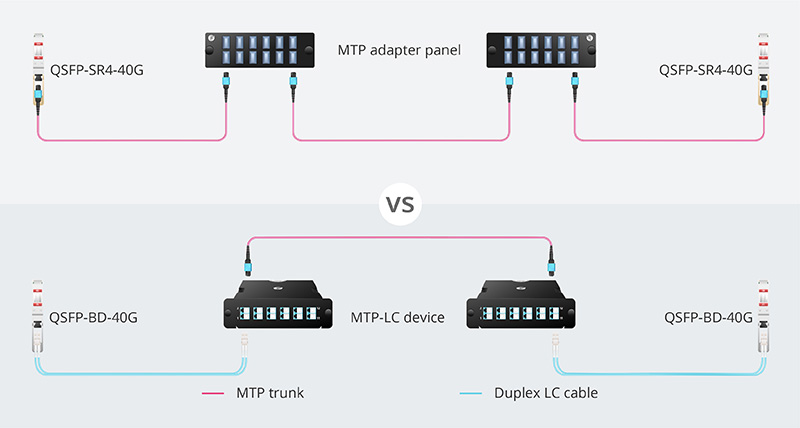 QSFP-40G-SR-BD, a breakthrough in the 40G network, enables the users to realize the migration from 10G to 40G without replacing the current 10G cabling infrastructure, which possesses immense flexibility and simplicity. Compared with QSFP-40G-SR-BD, the widely-used QSFP-40G-SR4 can also provide solutions for 40G cabling. It's all up to your needs and your preferences. Hope that what is discussed in the article could help you make an informed decision for your 40G network in short distances.