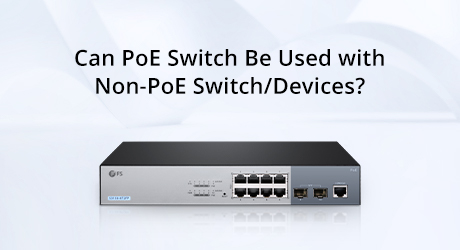 Can PoE Switch Be Used with Non-PoE Switch/Devices?

A PoE switch is a regular network switch that has Power over Ethernet functionality integrated. It allows compatible devices, such as VoIP phones, network surveillance cameras or wireless access points to work in places where power outlets or network connections don't exist. But many people still have many questions about PoE switches: can they pass through non-PoE switches? Can they be connected to non-PoE devices? With a PoE switch, can I still use the non-PoE devices? Here are the answers.

Can PoE Switch Be Connected to a Non-PoE Switch?

For those who have both PoE and non-PoE switches, they may wonder whether the PoE switch can supply power to the device through the non-PoE switch? The answer is NO!

PoE will only be provided to devices directly connected to the PoE switch, and only on request. PoE doesn't carry through additional switches, the last switch before the device has to be the PoE switch.

If you have a PoE switch and want to pass PoE to client devices, you should not use non-PoE switches in between, because most PoE switches will not turn on the power to ports that are connected to non-PoE client devices at all, and some older non-PoE switches not only fail to pass power, but they may make matters worse by shorting unused pairs 1 and 4 (connecting them to the ground). So, if you want a non-PoE switch to "power" other PoE devices, all you need is a PoE injectors.

Can PoE Switch Be Used with Non-PoE Devices?

PoE switches are great, but with it, can i still use other non-PoE devices? What happens if I plug a non-PoE device into a PoE switch? Here are the answers.

PoE switch that comply with the standard PoE(we also call it active PoE switch), has a detection and identification function before power supply. When the device is connected, the PoE switch will send a signal to the network to detect whether the IP terminal in the network has a powered device that supports PoE. If it does, the PoE switch will only supply power to it, if it does not support PoE switches, it will not supply power. So, you can plug a non-PoE device into a PoE switch, It will only transmit data, don't worry it will burn up your devices.

However, not all PoE switches are standard PoE switches. You have to verify the type of PoE, to figure out whether it’s active or passive. The one to be wary about is the passive PoE. Passive PoE switch does not adhere to any IEEE standard, which means it always sends electric current out over the Ethernet cable at a certain voltage regardless of whether the terminal device supports PoE or not. So using passive PoE switch may burn out the terminal non-PoE devices.

The PoE switch can automatically identify the terminal device needs power, whether it is a PoE device or a non-PoE device. Therefore, PoE does not interfere with normal switch operation. PoE and non-PoE devices can be mixed on the same switch at the same time, there is no problem at all. In addition, many PoE switches can automatically disable the PoE port of the signal for ports that do not need it, making them more power-efficient.