Comparison of EPON and GPON

Fiber is seeing wide adoption in the access network to expand capacity and versatility. With PON (Passive Optical Network ) technology gaining popularity and FTTH (Fiber to the Home) networks becoming the trend of future access network, two point-to-multipoint (P2MP) standards - Ethernet passive optical networking (EPON) and GPON (Gigabit Passive Optical Network) are both in active deployment. They are competitive and complementary with their own unique advantages. This tutorial will illustrate the EPON vs GPON comparison from different aspects.

Introduction on EPON vs GPON

EPON and GPON are variations of PON. A PON system generally consists of an optical line terminal (OLT) at the service provider's central office (CO) and a number of optical network units (ONUs) near end users. And optical splitters are used to enable a single optical fiber to serve multiple premises. EPON and GPON were developed by the IEEE and ITU-T to enable Gigabit rate solutions to deliver Ethernet and IP services. EPON is based on the IEEE standard for Ethernet in the First Mile. It leverages the features, compatibility and performance of the Ethernet protocol, enabling packet-based transmission at 1 Gbps and 10 Gbps. While GPON utilizes SONET/SDH technologies and Generic Framing Protocol (GFP) to transport Ethernet. It uses an IP-based protocol and either ATM or GEM (GPON encapsulation method) encoding. GPON enables "triple play" (voice-data-video) and is the basis of most planned FTTP (Fiber to the Premises) applications in the near future.

Although the general concepts and architectures (PON operation, ODN framework, wavelength plan, and application) are the same for EPON and GPON, their operation, data protocols and the features and services supported by each is totally different. 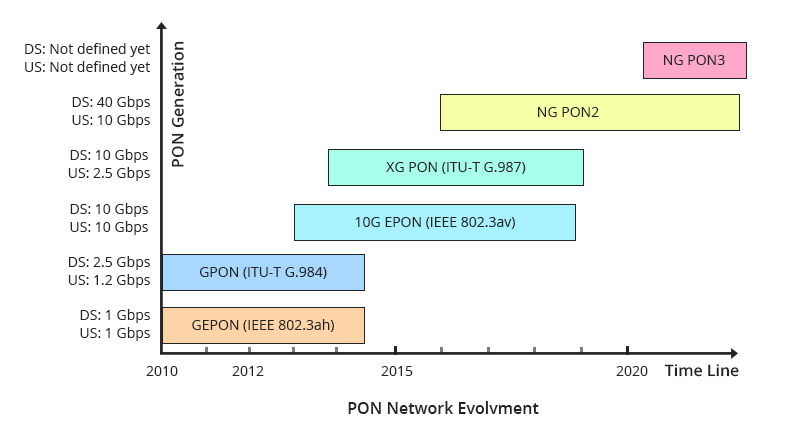 Featuring their own advantages and drawbacks, EPON and GPON are complementary and compete against each other in some aspects. So in the following contents, we'd like to make clear the EPON and GPON comparison.

Split Ratios means the number of users intended to be served by a given PON. This is typically 32, optionally 16, 64, or even 128. Split ratio can be influenced by the performance of the optical transceiver modules. A big split ratio will substantially increase the cost of optical transceiver modules and reduce the transmission distance. For example, when the split ratio is 1:16, the maximum transmitting distance can be 20 km. But for 1:32, the maximum distance is decreased to 10 km. EPON and GPON is the same on this aspect.

EPON generally supports a minimum of 32 (i.e. 1:32), and it does not limit the split ratio as 1:64, 1:128 are also available. Providers can define the split ratio according to the services and bandwidth they want to support. In contrast, GPON defines an upper limit on split ratio: It can support 128 but typically it is 64. There are several common split ratios of GPON – 1:32, 1:64, or 1:128. GPON offers the multiplicity of split ratios, but not much advantage on the cost consideration. EPON can deploy cheaper optics at the ONU as it does not need to reach a split ratio of 128.

Layering model and the associated management services are all mapped over Ethernet (directly or via IP). In order to accomplish the same in GPON, two layers of encapsulation are required. First, TDM and Ethernet frames are wrapped into GTC Encapsulation Method (GEM) frames, which have a GFP-like format (derived from Generic Frame Procedure ITU G.7401). Secondly, ATM and GEM frames are both encapsulated into GTC frames that are finally transported over the PON. As the Figure 2 shows.

EPON clearly offers a much simpler and more straightforward solution than GPON. The support of ATM and the double encapsulation of GPON serve no real benefit over a pure Ethernet transport scheme. To access service, EPON is only appropriate for data-only services and GPON for triple-play. EPON is a native Ethernet solution that leverages Ethernet protocol, and GPON leverages SONET/ SDH and Generic Framing Protocol (GFP) to transport Ethernet. Thus for layering comparison, EPON is better than GPON and for service, GPON is better.

Ethernet protocol has no inherent QoS capability. Because a PON system is not viable without QoS, most vendors enable this in EPON by using VLAN (Virtual Local Area Network) tags. While this does solve the QoS problem, it puts much higher costs. Since there is no automatic provisioning of VLAN tags, they are often provisioned manually. GPON has integrated QoS handling that makes it better than EPON, because EPON QoS is high cost relative to GPON. (Figure.3) 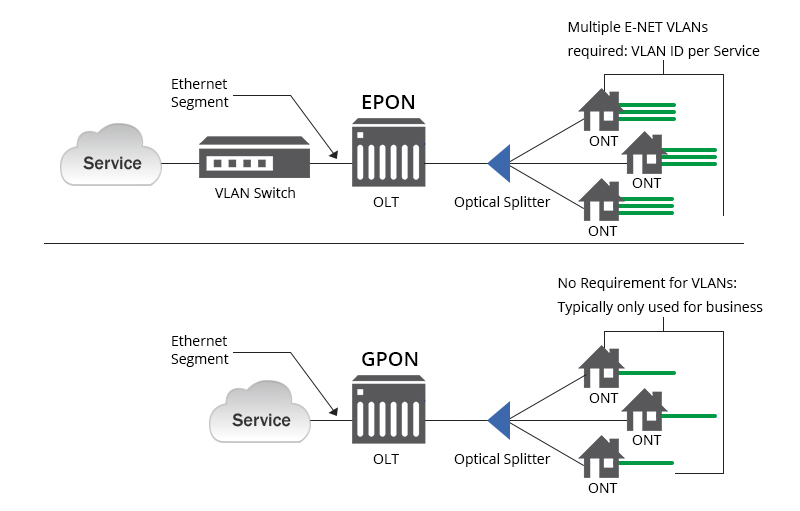 In GPON there are three different types of control messages: OMCI (ONT Management and Control Interface), OAM, and PLOAM (Physical Layer OAM). Their roles are shown in the table below.

The cost of GPON or EPON deployment is depended on the OLT, ONU/ONT and passive optical components. An ODN consists of fiber cable, cabinet, optical splitter, connector, and etc. For the same number of users, the cost for the fiber and cabinet with EPON is similar to that with GPON. The cost of OLT and ONT is decided by the ASIC (Application Specific Integrated Circuit) and optical transceiver modules. The GPON chipsets available in the market are mostly based on FPGA (Field Programmable Gate Array), which is more expensive than the EPON MAC (Media Access Control) layer ASIC. The optical module of GPON is also more expensive than EPON. When GPON reaches deployment stage, the estimated cost of a GPON OLT is 1.5 to 2 times higher than an EPON OLT, and the estimated cost of a GPON ONT will be 1.2 to 1.5 times higher than an EPON ONT.

EPON and GPON has their own advantages and disadvantages respectively. In performance comparison, GPON is better than EPON, while EPON has much advantages on deployment time and cost. By now EPON is still the mainstream while GPON is catching up. Going forward to the broadband access market, it is more likely that they are coexisting to complement each other. For the users who have demands of multi-service, high QoS and security, as well as ATM backbone network, GPON seems to be an ideal. And for those who is much care about the cost and has less security requirements, EPON may be better.