It has been over 20 years since DWDM technology first came on the scene, and in the last two decades it has revolutionized the transmission of information over long distances. At present, DWDM technology is so widely applied that we almost forget that there was a time when accessing information from the other side of the globe was expensive and slow.

What Is DWDM Technology - Data in a Rainbow

DWDM stands for Dense Wavelength Division Multiplexing, which is an optical multiplexing technology used to increase bandwidth over existing fiber optic backbones. The “dense” here refers to the fact that DWDM technology supports more than 80 separate wavelengths, each about 0.8 of a nanometer (nm) wide on a single optical fiber.

DWDM technology increases the network capacity and makes efficient use of bandwidth. The data from various different sources is put together on optical fiber in which each signal travels at the same speed on its own light wavelength. At the receiver end, every channel is demultiplexed into original source, therefore different data formats with different data rates such as Internet data, Synchronous Optical Network data (SONET), and asynchronous transfer mode (ATM) data can be transmitted together at the same time through one optical fiber. The transmission capability of DWDM is 4 to 8 times of TDM (Time Domain Multiplexing) and here EDFAs (Erbium doped optical amplifier) are deployed to boost the strength of signal. The signal can be transmitted to more than 300 km before regeneration.

Figure 1: The principle of DWDM technology

The DWDM-based network structures can be divided into three classes, which are simple point to point DWDM link, DWDM wavelength routing with electronic TDM and switching/routing backbone network and all optical DWDM network.

In this DWDM architecture, the electronic nodes can be SONET/SDH switches, Internet routers, ATM switches, or any other type network nodes. The DWDM node consists of typically a pair of wavelength multiplexer / de-multiplexer (lightwave grating devices) and a pair of optical-electrical/ electrical-optical converters. Each wavelength channel is used to transmit one stream of data individually. The DWDM wavelength multiplexer combines all of the lightwave channels into one light beam and pumps it into one single fiber. The combined light of multiple wavelengths is separated by the demultiplexer at the receiving end. The signals carried by each wavelength channel are then converted back to the electrical domain through the O/E converters (photo detectors). In this way, one wavelength channel can be equivalent to a traditional fiber in which one light beam is used to carry information. It is worth noting that the wavelength channels in one fiber can be used for both directions or two fibers are used with each for one direction. 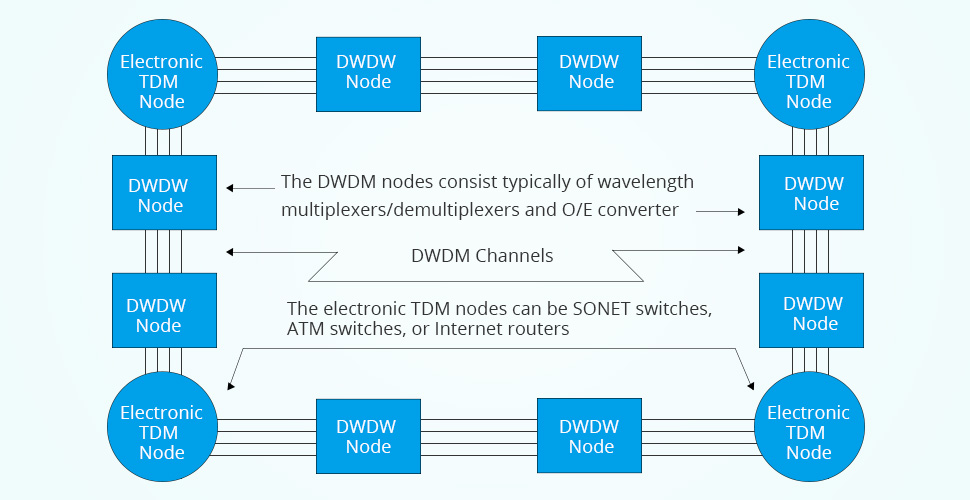 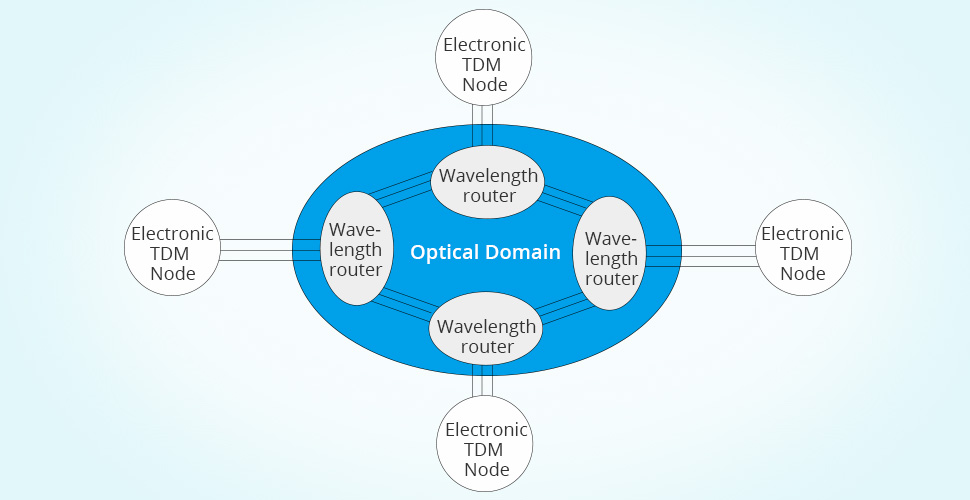 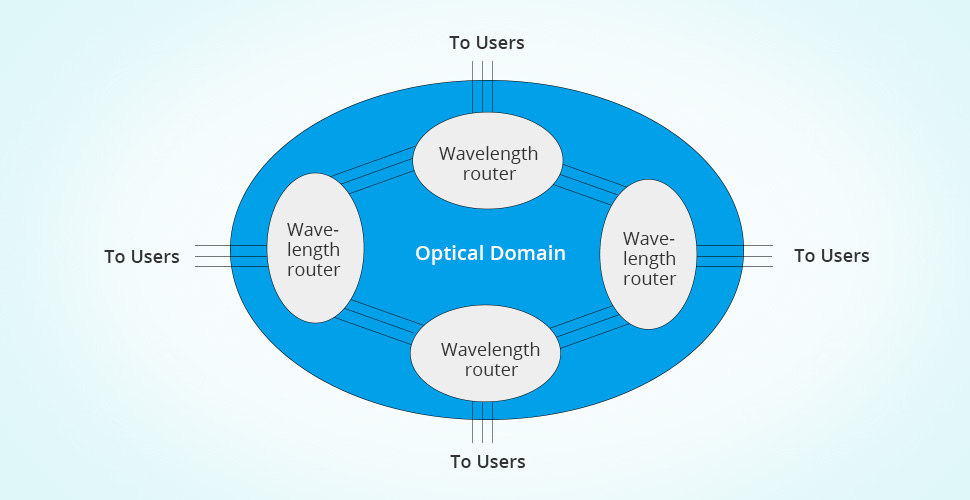 In the previous text, we have fully discussed DWDM technology and DWDM network. And CWDM is used to be a more popular low cost entry point for many customers. However, as the need for capacity grows and service rate increases, there is a demand to increase the capacity of existing CWDM networks. The principle of deploying DWDM solution over CWDM network lies in the fact that DWDM wavelengths are actually within the CWDM wavelengths range as shown in the Figure 5. Thus, the DWDM network can be connected to CWDM network via the CWDM channels of 1470 nm, 1490 nm, 1510 nm, 1530 nm, 1550 nm, 1570 nm, 1590 nm, and 1610 nm. In most cases, the 1530nm and 1550nm channels are suggested for the combination of CWDM and DWDM system to increase the capacity of the existing CWDM fiber optic network. 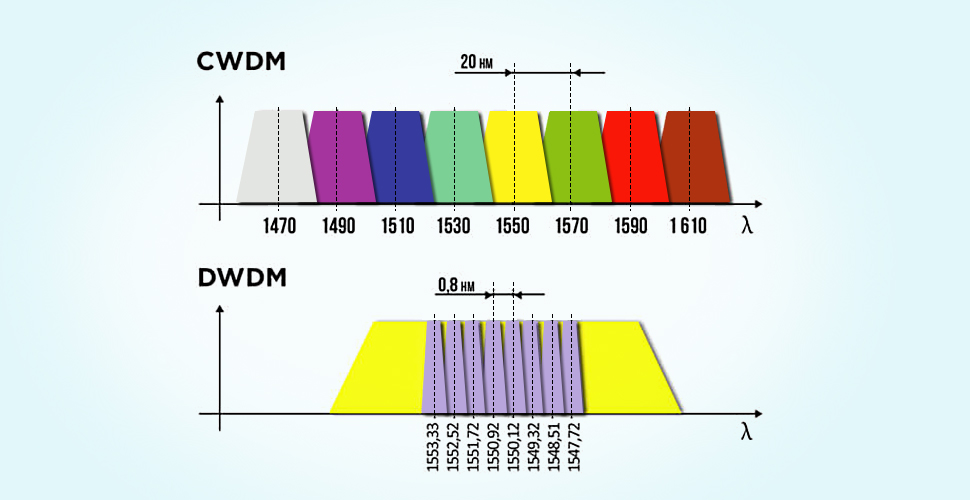 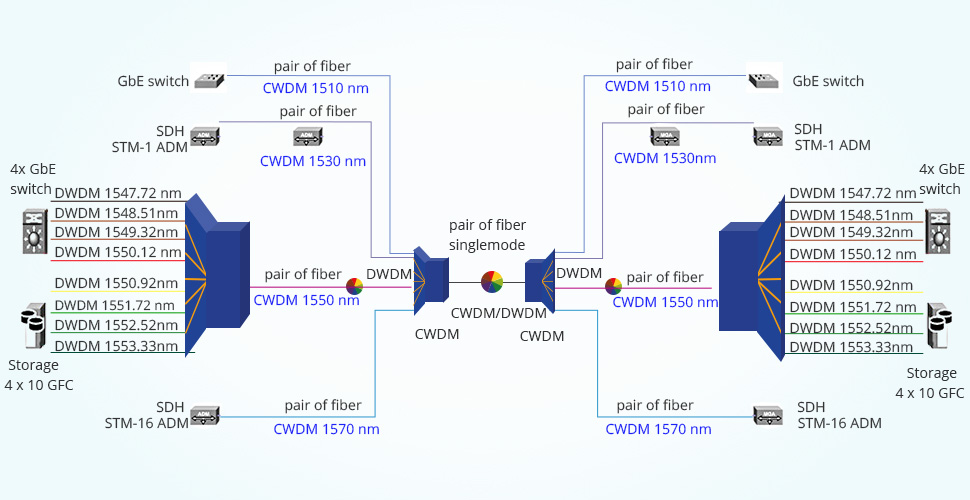 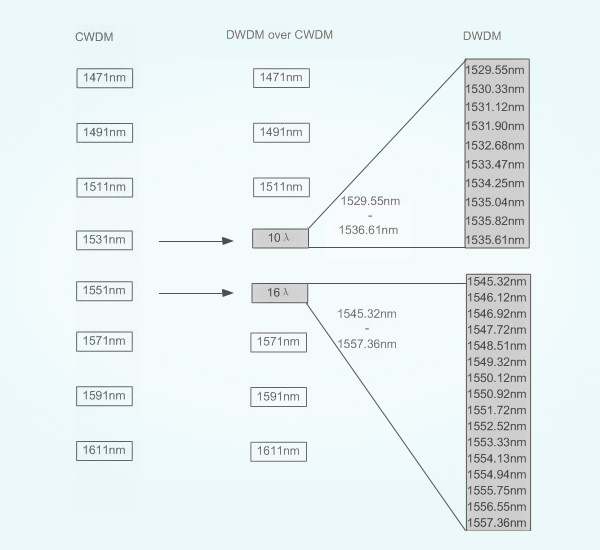 When deploying a DWDM network, customers may encounter some questions that will affect their choices of vendor, equipment type, design and so on. Some of these FAQs are as follows:

Is the DWDM system compatible with existing fiber plant?

Although the majority of installed fiber such as SM fiber and NZ-DSF can support DWDM network, there are still some types of older fiber that are not suitable for DWDM use. So if new fiber must be deployed, choose the one that supports future growth, particularly when DWDM systems will expand into new wavelength regions with higher bit rates.

What is my migration and provisioning strategy?

Because DWDM technology is capable of supporting massive growth in bandwidth demands over time without forklift upgrades, it represents a long-term investment. Both point-to-point and ring topologies can serve as foundations for future growth. Planning should allow for flexible additions of nodes to meet the changing demands of customers.

What network management tools can I use?

A comprehensive network management tool will be needed for provisioning, performance monitoring, fault identification and isolation, and remedial action. Such a tool should be standards-based (SNMP, for example) and able to inter-operate with the existing operating system.

What is my strategy for protection and restoration?

Designing a protection strategy is a complex process that many considerations should be taken into account. There are both hard failures and soft failures. The former must be addressed through redundancy at the device, component, or fiber level. The latter must be addressed by the system through intelligent wavelength monitoring and management. Protection and survivability strategies depend upon service type, system, and network architectures. In many networks, they also depend on the transport protocol.

The Historical Evolution and Future Trend of DWDM Technology

As Figure 8 shows, by the mid-1990s, dense WDM (DWDM) systems were emerging with 16 to 40 channels and spacing from 100 to 200 GHz. By the late 1990s, DWDM systems had evolved to the point where they were capable of supporting 64 to 160 parallel channels, densely packed at 50 or even 25 GHz intervals. It can be seen that as technologies advance, there is an increase in the number of wavelengths accompanied by a decrease in the spacing of the wavelengths. Along with increased density of wavelengths, systems also advanced in their flexibility of configuration, through add-drop functions, and management capabilities.

Figure 8: The Evolution of DWDM Technology

Recent innovations in DWDM transport systems include pluggable and software-tunable transceiver modules capable of operating on 40 or 80 channels. This dramatically reduces the need for discrete spare transceivers, when a handful of tunable transceiver modules can handle the full range of wavelengths. In the future, DWDM technology will continue to provide the bandwidth for large amounts of data. With the development of technology, closer spacing of wavelengths will be possible to increase the capacity of systems. But DWDM is also moving beyond transport to become the basis of all-optical networking with wavelength provisioning and mesh-based protection. And this evolution will be promoted by switching at the photonic layer.

In the early 1990’s, a single fiber can only transmit 2.5Gbps of information, but now with DWDM technology, it can carry almost 10 Terabits/sec. With the prominent advantages, DWDM network has become an ideal and cost-efficient solution to expand network capacity. There is no doubt that DWDM technology will reshape the future communication network.