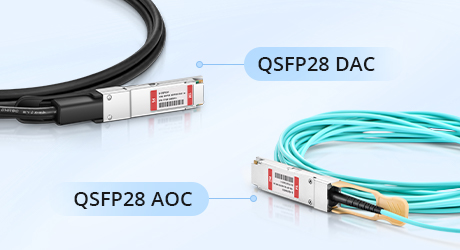 From providing flawless, high-flow media to real-time connectivity with customers around the world, today's data centers require ultra-high-speed data transmission, promoting the development of the whole optical communication market. QSFP28 cable is a necessity for data transmission. How many types of QSFP28 cable are available in the market and what are they? Find answers in this article.

QSFP28 cable contains two forms: one is a form of high-speed cable with QSFP28 connectors on either end, transmitting and receiving 100Gbps data over a thin twinax cable or a fiber optic cable, and the other is a form of breakout cable that can split one 100G signal into 4x 25G (QSFP28 to SFP28) or 2x 50G, enabling connectivity between network devices with different speed ports, while fully utilizing port bandwidth.

100G QSFP28 DAC is a 4-channel parallel passive copper cable that is combining four 28 Gbps SFP channels into one high-density cable. It offers 4 independent data transmitting channels and 4 data receiving channels via copper cable, providing a cost-effective way to establish a 100-Gigabit link between QSFP-100G ports of switches within racks and across adjacent racks, ideal for data centers, high-end servers and enterprise wiring closets. QSFP28 DAC is usually applied for ToR (Top of Rack) interconnections between 100G ToR switch and server or the stacking of 100GbE switches (as the figure below). 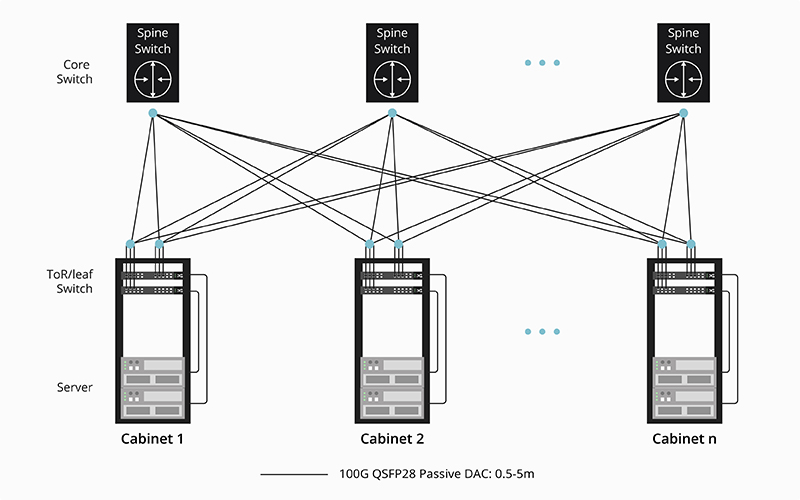 QSFP28 to SFP28 Passive DAC Cable is a breakout cable providing a hybrid transition from a QSFP28 on one end to four individual SFP28 on the other end. It offers four parallel, bi-directional channels each operating at up to 25Gps. Featuring low crosstalk, small bend radius and low power consumption, the 100G to 25G breakout cable meets the ever-increasing demand for higher channel density with high-level signal integrity in high-performance computing, top-of-rack switching, and network storage deployments.

100G QSFP28 to 2x 50G QSFP28 breakout DAC is a 4-channel parallel copper direct attach cable offering 4 independent data transmission channels and 4 data receiving channels via the cable. The aggregate data rate of 100Gbps over 5m transmission can be achieved with this product. Designed for use in cost-effective 100GbE to 2x 50GbE Ethernet connectivity solution to meet the growing needs for higher bandwidth in data centers, this QSFP28 cable is suitable for the Infiniband EDR and 128G Fibre Channel.

100G QSFP28 AOC cable is composed of multi-mode optical fiber and parallel optical modules. The QSFP28 transceivers at both ends provide photoelectric conversion and optical transmission functions to increase the transmission rate and distance of the optical cable without weakening the compatibility with the standard electrical interface. With no insertion loss and return loss, 100G AOC is mainly used for short-distance multi-channel data communication applications in several locations in the data center like ToR, EoR and MoR (as the figure below). 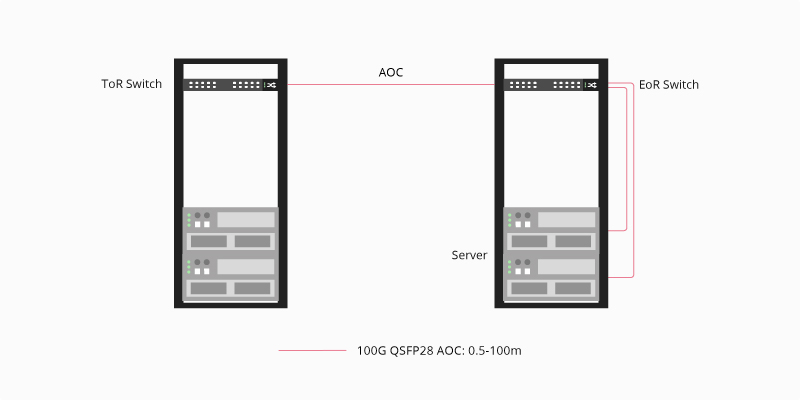 QSFP28 to SFP28 breakout AOC is a high data rate parallel active optical cable, to overcome the bandwidth limitation of traditional copper cable, terminated with a QSFP28 module at one end and four SFP28 modules at the other. It provides IT professionals with a cost-effective combination of 100G QSFP28 and 25G SFP28 interconnect solutions that enable host adapters, switches, and servers.

Q: What is the operating temperature range and the standard of QSFP28 cable?

A: Generally, the operating temperature range of 100G cable is 0°C to 70°C. The standards of the QSFP28 cable are shown below.

Q: What is the maximum transmission distance of QSFP28 cable?

A: Yes, QSFP28 cables can be used for 40G, but not vice versa. There is the rule about mixing optical transceivers at different speed: both ends of the two modules have to match and the form factor needs to match as well. Additionally, port speed needs to be equal or greater than the optic used.

Q: What does breakout mode of QSFP28 cable mean?

A: Yes, third-party 100G passive copper cables can be used but all the cables are required to comply with the associated IEEE specifications, as well as SFF-8636 management interface / EEPROM specifications to allow them to be correctly identified and recognized by the switch/router.