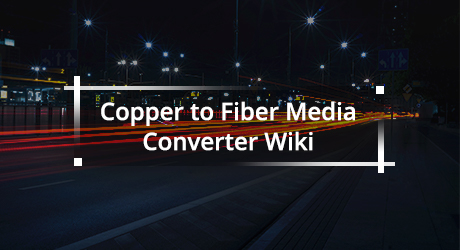 Ethernet copper to fiber media converters serve as the most basic type supporting 10/100/1000Mbps or 10Gbps, which are applied to a variety of common scenarios, including point-to-point, high-density fiber distribution and redundant fiber/copper applications.

Point-to-point connection is a data link between two communication endpoints or nodes. This is the most basic and direct usage. For example, a pair of media converters can be used in point-to-point connections that connect two Ethernet switches (or routers, servers, hubs) via a fiber cable, or to connect switches to the workstation and file server. This application is very simple and efficient, which can be widely used in individual homes or small businesses.

Redundant Ethernet media converters usually have three ports, providing fiber or copper link redundancy. Via the built-in DIP (dual in-line package) switches, the converter can be configured as 2-port redundant mode, which supports auto-recover function. Provided that one cable link is broken, the redundant link is enabled to ensure 100% uptime. They are designed for mission-critical network applications that require fibers or copper links to automatically recover less than 10ms (millisecond), such as ISPs (Internet Service Provider), telecom, hospitals, banks and enterprises. Redundant links can run in parallel paths or geographically diverse paths shown below. 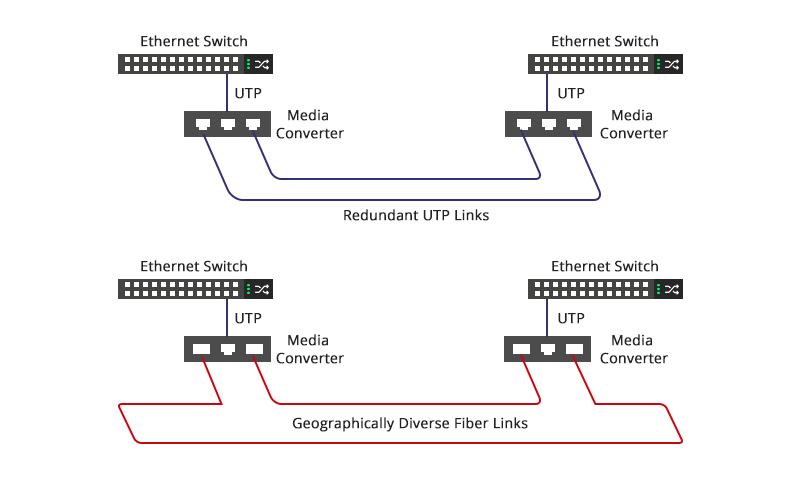 T1/E1 copper to fiber media converters often provide diagnostic features to support the installation and maintenance of T1 or E1 connections. They enable the deployment of fiber into campus or industrial environments where fiber is free from electrostatic interference noises, making these converters especially important. They operate in pairs extending distances of TDM circuits over fiber. In this application, a pair of T1/E1 media converters are used to extend the demarcation point (hand-off from the Service Provider) to another tenant building with fiber.

T3/E3 copper to fiber converters provide coax-to-fiber conversion and can be framing independent to operate with framed or unframed, channelized or fractional unchannelized data streams. They can be used to connect to devices such as PBXs (private branch exchange), multiplexers, routers and video servers via fiber. T3/E3 media converters also provide a cost-effective solution for extending telecom demarcation points.

Serial to fiber media converters provide fiber extension for serial protocol copper connections. They can automatically detect the signal baud rate of the connected full-duplex serial device, and support point-to-point and multi-point configurations. They can be connected with RS-232, RS-422 or RS-485 port of network devices.

RS-232 fiber media converters are capable of seamlessly connecting with most serial devices, as they support all sorts of hardware flow control signals, operating as asynchronous equipment. RS-232 is widely used because it is so readily available. But it has limited distance, and is susceptible to noise and not multi-drop (Many devices can be connected to the same set of copper cable, while each device listens for its own data and negotiates with the others before sending). In this application, a PC gets access to a terminal server via a serial connection in which two RS-232 fiber media converters are used to achieve the integration of fiber and copper cables.

RS-422 fiber media converters have advanced advantages compared with RS-232 converters. It can run longer distances, and is multi-drop and noise resistant. In this application, RS-422 converters are deployed in a bookend configuration to enable serial network distance extension over fiber. They are installed at each end of the fiber link and provide media conversion for connectivity between a serial host/controller and multi-drop serial devices.

RS-485 fiber media converters are used in many multi-point applications in which one computer controls many different devices. RS485 converter is multi-drop and can also run long distance as RS-422, but it has better commanding and listening functions. In this application, a pair of RS-485 converters provide the multi-drop connection between the host equipment and connected multi-drop devices via fiber cable.