FS CommunityKnowledge CenterCWDM vs PSM4: Which One Is Better for 100G Ethernet?

CWDM vs PSM4: Which One Is Better for 100G Ethernet?

In the digital age, the data transmission speed is of great importance. Nowadays, more and more enterprises are pursuing hyper scale data centers to meet their growing data transfer needs. In this case, the emergence of 100G Ethernet has solved their difficulties very well. In addition to most IEEE defined 100G solutions, the non-IEEE defined 100G CWDM and PSM4 have received a lot of attention.

CWDM, also called Coarse Wavelength-division Multiplexing, is a 100G fiber interface which can deliver distance up to 2km over duplex single-mode fiber. Defined by Multi-Source Agreement (MSA), CWDM includes Forward Error Correction (FEC) as a part of system design. Typically, the CWDM architecture needs a transmitter, a multiplexer, a de-multiplexer and a detector. When it works, the CWDM4 module transmits four 25Gb/s electrical data into four CWDM optical signals over a single-mode fiber and then multiplexes the signals for 100G transmission, and vice versa. 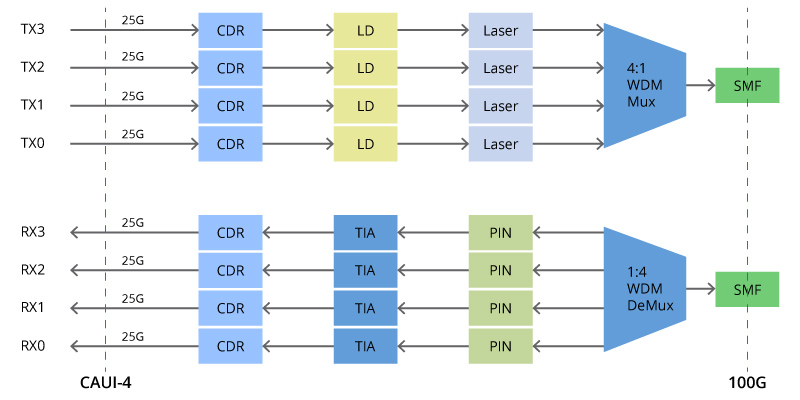 Parallel Single Mode 4-channels (PSM4) is a cost-effective solution for Data Center Interconnect (DCI) up to at least 500m over single-mode fiber with 12 fiber MTP/MPO connectors. Different from CWDM, PSM4 uses eight parallel single-mode fibers (4 transmit and 4 receive) for a point-to-point 100G transmission, each of which transmits at 25Gbps. In addition, the light source for PSM4 is a single and uncooled distributed feedback (DFB) laser. Usually, PSM4 requires a directly modulated DFB laser (DML) or an external modulator per fiber.

Apart from the common merits like high bandwidth and low insertion loss, PSM4 is also very cost-effective. Since PSM4 contains a laser, it doesn't require a costly Mux/Demux per laser like CWDM, which also simplifies the deployment and management of optical multiplexer/de-multiplexer. 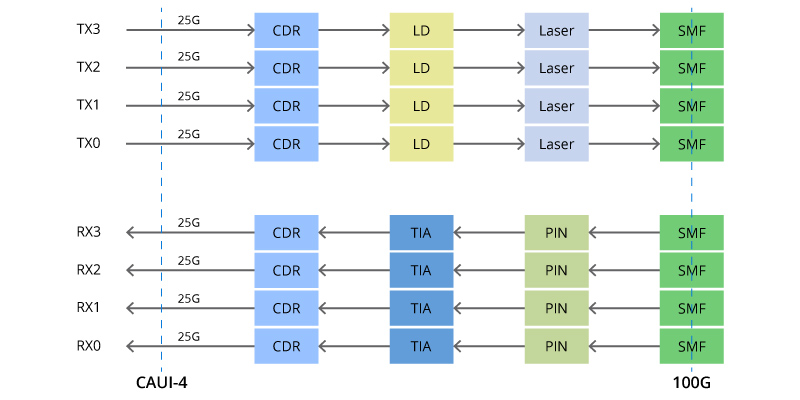 Generally speaking, the commonly used 100G interfaces are 100G SR4, 100G DR4, 100G LR4, 100G FR4, 100G ER4 and 100G ZR4, which are defined by IEEE standard. However, the transmission distances of these transceivers are either too short or too long for data center application. Just like 100G PSM4, 100G DR4 can also achieve a transmission distance of up to 500m, but it doesn't support 100G to 4x25G breakout application, and it also consumes more power. As for 100G LR and other interfaces, they are usually expensive and not very suitable for data centers that require 500m or 2km max reach. Under this circumstance, MSA-defined 100G CWDM and PSM4 can not only bring cost-effective solutions for data center applications but also support longer distances than 100G SR4, which is an essential solution for 100G Ethernet.

CWDM vs PSM4: What's the Similarity?

As two promising 100G Ethernet solutions, CWDM and PSM4 do share some similarities in some respects.

CWDM vs PSM4: What's the Difference? 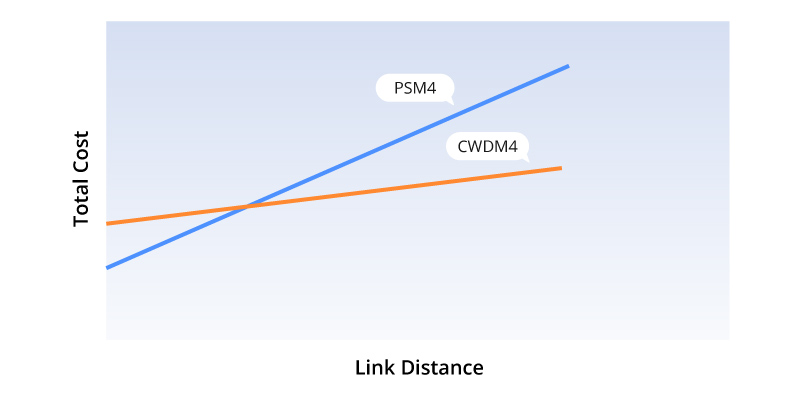 To sum up, both CWDM and PSM4 are suited for high-density cabling and favored by most data centers. But they also differ from each other in terms of price and management. Therefore, companies can make a suitable choice based on their actual link length requirements.

Jason Paul
Server re-rack is complete! Thanks to Primespec Inc and FS.COM for the great customer service, and a
Jul 29, 2021
 11.4k
Knowledge