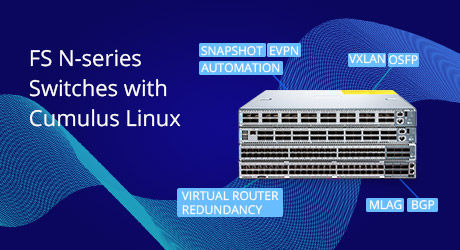 FS N-Series Switches with Cumulus Linux: What Function Do You Expect?

Today’s world is all about open, and the trend has spread to varied fields. The network is no exception. Till now, we have had the open source software, open source hardware, open source switch, and open source operating system. In response to the expansion of open source network, FS released N-series bare metal switches which leave room for customers to configure their desirable network switches. FS has added the Cumulus Linux to the switches.

FS N-series bare metal switches allow customers to customize switches with desired network operating systems, and make it possible for itself to seek other top-notch network OSs. These switches enjoy a good reputation with high speed, high performance, and high density. The devices boast Broadcom switching chip and Intel CPU, together with advanced configurations and reasonable price. Below are bare metal switches armed with Cumulus Linux, ideal for the traditional or fully virtualized data center. All of the three switches enjoy a 5-year hardware warranty.

What Can You Get From FS N-series Switches with Cumulus Linux?

The convoluted configurations in data center are always a time-consuming task for network engineers. With automation enabled by Cumulus Linux, all configurations are stored in one place. On first boot, Cumulus Linux will invoke ZTP (Zero Touch Provisioning) which enables network devices to be quickly deployed in large-scale environments. Similarly, changes can be accomplished in one centralized repository, rather than log into a dozen switches and type on multiple switches. Automation can effectively prevent inconsistencies and misconfigurations driven by inflexible or proprietary vendor systems. FS N-series switches can realize automation with Cumulus Linux OS, in a bid to limit resource demand, mitigate errors and help operators manage more switches.

MLAG refers to Multi-chassis Link Aggregation. It shares the same goal with the switch stack to enable several network switches to behave as one logical switch. MLAG reduces operational expenses by providing active-active links with a Link Aggregation Group (LAG), eliminates the need for the Spanning Tree Protocol (STP), and provides faster layer 2 convergence upon link and device failures. FS N-series bare metal switches that support MLAG can interconnect with other FS network switches that are geographically separate. In this way, traffic is more evenly distributed to each of the switches through the use of LAG hashing. And each switch is independently able to forward / route traffic.

EVPN stands for Ethernet Virtual Private Network and is a new standard for data center overlays. EVPNs utilize the BGP control plane infrastructure, providing greater scale and the ability to isolate groups of devices (hosts, servers, virtual machines, and so on) from each other. It provides a wide range of services such as E-LAN, E-Line, E-TREE, L3VPN, DCI, DC-Overlay, IRB, which are previously realized respectively by different VPN technologies such as VPWS, VPLS, SPB/TRILL and L3VPN. Decent EVPN implementations can reduce flooding by turning off unknown unicast flooding, and eliminating ARP flooding with local ARP proxy. The Network Command Line Utility (NCLU) can be adapted to provision and manage EVPN.