Today’s question is about network switch displacement. This is a question that most data centers have to face in a time. Because devices have spent their whole lives there or the growth in data traffic quantity has outpaced their capacity. Here takes Cisco 3560 switch replacements as an example.

User’s Question: What would you guys recommend to replace some Cisco 3560 switch? Need to keep budget small, but need to do VLANs and multiple port trunks and having some 10GbE capabilities. This will be used for data center.

Answer: Basically, you’re saying that you’d like to replace some Cisco 3560 switches with new switches that support VLANs, multiple port trunking (usually by using link aggregation control protocol [LACP]) and have some 10G ports, right? And on the premise of “keeping the budget small”.

As shown in the following figure (right), in data center Cisco 3560s are commonly used as access switches that connect servers and applications to the network, and the top-tier switch is usually 3750. Since you need to replace 3560 with an access switch that is capable of 10G, Cisco 3650 would be the closest thing. At the meantime the top-tier switch 3750 is usually displaced by Cisco 3850/Nexus FEX, in essence a change from 1G uplink to 10G uplink. 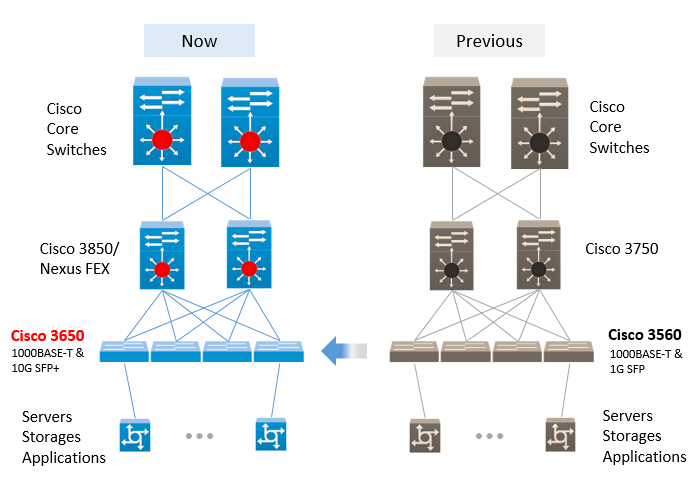 The change will not bring much trouble to you when you need to install the devices and get support from Cisco Certified Network Assistant. Below are the major differences between Cisco 3560 switch and the 3650 switch.

The 10G ports of 3650s have three choices. Here are the models that can be configured with different numbers of 10G ports:

Considering the vendors might give you a discount, you could get one 3650 series switch at much lower cost than the MSRP (Manufacture Suggested Retail Price). However, these prices do not include optics or software licenses.

Besides Cisco 3650, I know some alternatives that are also fairly good 10G access switches in practical use. They are completely affordable and can meet all your needs.

Two other switch models from Arista have similar performance with switches mentioned above. But not many vendors can supply them now and the price is much higher compared with others.

Two other switch models from Arista have similar performance with switches mentioned above. But not many vendors can supply them now and the price is much higher compared with others.

One more choice is white-box switch. They can do the same job as the big brand switches mentioned above. Actually, for the same software options, white-box switch is a better option for the price. Below are two switch models from FS.