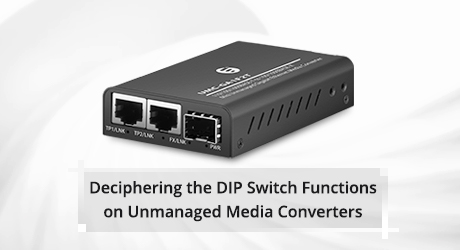 What Is the DIP Switch on Unmanaged Media Converter

DIP switch stands for dual in-line package switch. It is a simple and cost-effective component that can help select and change between various hardware or device options. Users just need to toggle each switch between on and off positions to enable and disable certain functions.

In this part, we’ll look more closely at what the precise functions of a typical DIP switch set usually entails.

A jumbo frame is an Ethernet frame that carries a payload greater than the standard maximum transmission unit (MTU) of 1,500 bytes. It can be as large as 9,000 bytes. To squeeze larger payload into each frame, the media converter can have fewer frames to process. Therefore, enabling jumbo frames can improve network performance by making data transmissions more efficient. Just pull the switch to allow the passage of the jumbo frame under certain size (like 9k bytes; it may vary from different vendors).

In general, the TP1 and TP2 on the media converter can receive the same information. By enabling the port isolation, TP1 and TP2 can be separated with regards to the data transmission, improving the network security. One can use the DIP switch to enable (ON) or disable (OFF) the port isolation between two copper ports.

This function is to force the fiber optic port run at 100M speed, when the terminal device only support 100M.

In the Store and Forward mode, the entire frame will be stored in the memory for inspection on its destination address, source address, and the CRC. If no errors are present, the frame is forwarded to the appropriate port. This process ensures that the destination network is not affected by corrupted or truncated frames, but may cause latency. The realization of this mode won’t take much effort either, just follow the user instructions to make changes on the DIP switch.

In Modified Cut Through mode, the frame will be forwarded as soon as the destination address is identified. This mode allows lower latency and saves buffer space. However, the drawback is that network performance may be impacted by forwarding corrupted or truncated frames which cannot be detected by reading only the destination address. These bad frames can create broadcast storms wherein several devices on the network respond to the corrupted frames simultaneously. An unmanaged media converter can run in this mode by the DIP switch on it.

Media converters from different vendors may have different DIP switch settings. Some use one key to control a function, and some use two or more. The following table is extracted from the user manul of a media converter. LFP function and FX 100M can be controlled by key 1 and key 4 respectively. Whereas each forward mode is under the control of the combined keys. For example, put key 2 to the off position and key 3 to the on position, the modified cut through is enabled.

Some functions can only be enabled in specific conditions. For example, LFP cannot be realized unless the two media converters working in pairs both support and activate it.

An unmanaged media converter equipped with the DIP switch can be managed manually by toggling the corresponding button, thus enabling full control over the precise function that the device will perform in a range of defined scenarios or applications. One thing to remember is that it is necessary to observe and remain within the manufacturer’s given specifications, since the operation and function of DIP switch on each media converter vary.

Related Article:What Are FEF and LFP on Media Converter