As we know, the power over Ethernet (PoE) technology is developed to meet the demand for connectivity to network devices like IP cameras, IP access points and voice over IP (VoIP) phones. PoE technology provides both data connection and power supply for these devices through only one Ethernet cable, which greatly simplifies the deployment of PoE devices. PoE network switch, such as 8-port Gigabit PoE switch and 24-port Gigabit PoE switch, are hardware devices used to connect these PoE appliances. Among them, 48-port Gigabit PoE managed switches are popularly used in LAN environments.

Due to its high port count and high capacity, 48-port PoE switches are able to provide connections to multiple PoE nodes, which makes it a favorite when used as an access layer switch. 48-port Gigabit PoE switches can sufficiently support applications in different networks, including that of small and midsize businesses (SMBs), public areas, schools and hospitals, etc. As for a 48-port PoE Layer 2+ switch with 10GbE ability, such as FS S1600-48T4S, it can be used as a core switch in some middle-size networks. The simplified management functions also facilitate in monitoring and configuring the switch. 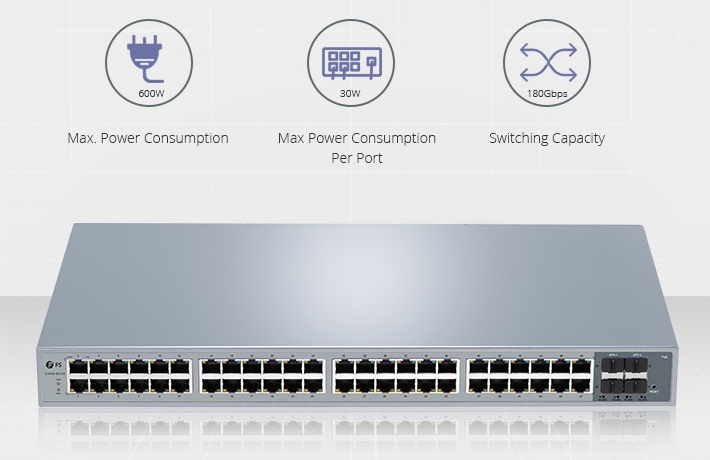 In this part we will discuss how to deploy the 48-port Gigabit PoE managed switch in different networks, both as an access layer switch and a core switch.

When used in the access layer, the 48-port Gigabit PoE switch can support multiple PoE and non-PoE network devices. Assume that an SMB has two office buildings located 100 meters from each other, and each building has a server rack. The first office now has 20 VoIP phones, 10 IP cameras, 10 IP access points and 40 computers, while the second building has double the number of devices. Here we will need not only 48-port PoE switches but also some Ethernet switches in the access layer. 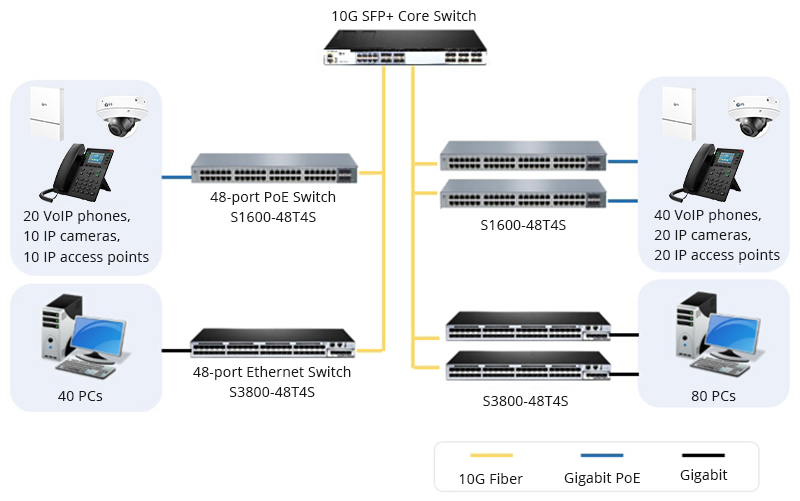 Deploying the 48-Port PoE Switch as a Core Switch 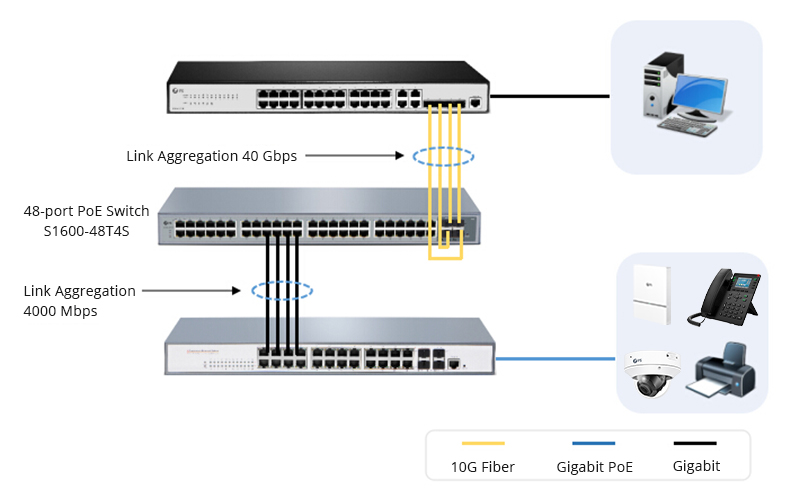 The management functions of the 48-port Gigabit PoE switch FS S1600-48T4S enable easy configuration of the PoE ports. Managing can be done through Web interface, Command Line Interface, Telnet, SSH, SNMP, etc. Here we will introduce how to configure some parameters of the 48-port PoE switch in details.

Alter Between PoE and PoE+

Besides PoE, the FS S1600-48T4S also supports enhanced PoE (PoE+). So the maximum per port PoE consumption is increased from 15.4W to 30W, which can be configured on demand of course.

Turn off the PoE

If the device connected to the 48-port PoE switch is non-PoE and we want to shut down the electrical power on this interface, the command is:

For example, if ports 1~5 of S1600-48T4S are connected to PCs, the following command can turn off the power supply to these PCs but just keep the data transfer function.

When we need to know the operational information of the PoE interface, we can use the command “Switch# show poe” to get it. For example:

Then we can know the power supply from the interface and the power consumption of the device.

48-port Gigabit PoE managed switches are preferred in LAN applications for both access layer and core layer due to its high functionality and simplified management features. The deployment examples of the 48-port Gigabit PoE managed switch FS S1600-48T4S can prove the versatility of 48-port PoE switches. And the configuration of PoE ports is also as easy as can be seen on the above parts.

Related Article: How to Choose a Suitable 48-Port PoE Switch?