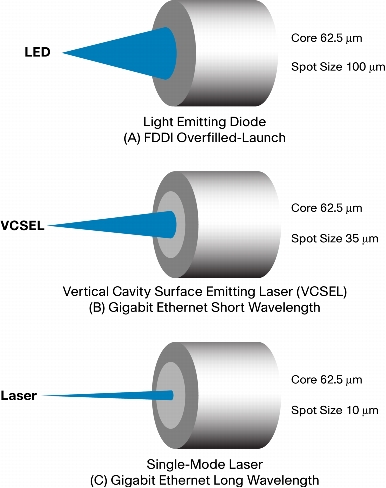 Basically, both kind of light source must be able to turn on and off millions to billions of times per second while projecting a near microscopic beam of light into an optical fiber. During the working process of optical signals, they are both supposed to be switched on and off rapidly and accurately enough to properly transmit the signals.

The general difference between them as that LEDS is the standard light source which is short for light-emitting diodes. Laser light source like gas lasers may be mainly used in some special cases. Lasers are more powerful and operate at faster speeds than LEDs, and they can also transmit light farther with fewer errors. Laser are also much more expensive than LEDs.

Laser vs LED: Difference in Structure

made of materials that influence the wavelengths of light that are emitted. A basic LED light source is a semiconductor diode with a p region and an n region. When the LED is forward biased, current flows through the LED. As current flows through the LED, the junction where the p and n regions meet emits random photons. LEDs emitting in the window of 820 to 870 nm are usually gallium aluminum arsenide (GaAIAs). Laser is also a semiconductor diode with a p and an n region like LED, but it provides stimulated emission rather than the simplex spontaneous emission of LEDs. The main difference between a LED and a laser is that the laser has an optical cavity required for lasting. The cavity is formed by cleaving the opposite end of the chip to form highly parallel, reflective, mirror-like finishes.

VCSEL, known as vertical-cavity surface-emitting laser, is a popular laser source for high speed networking, which consists of two oppositely-doped Distributed Bragg Reflectors (DBR) with a cavity layer. It combines high bandwidth with low cost and is an ideal choice for the gigabit networking options. The idea for vertical light emitting laser started between 1975-1977 to satisfy the planarization constraints of the integrated photonics according to the microelectronic technology available then. Nowadays, apart from the application in optical fiber data transmission, it is also widely used for other applications like analog broadband signal transmission, absorption spectroscopy (TDLAS), laser printers, computer mouse, biological tissue analysis, chip scale atomic clock, etc.

Different wavelengths travel through a fiber at different velocities as a result of material dispersion. What should always keep in mind is that both Laser and LED will not emit a single wavelength, but a range of wavelength that is known as the spectral width of the source. Fiber optic light source is always working with the fiber optic power meter. During the working process, it collimates beams of light and aim right down the center of the narrow single mode core and propagates in essentially a single mode transmission. For more questions about fiber optic test equipment, such as visual fault locators, optical power meter, OTDR testers, etc., please go for FS.com.