As large data centers migrate to ultra high-speed infrastructures, optical communication technologies are in place to keep pace with the ever-expanding number of users, devices, and applications. QSFP28 and QSFP-DD transceivers are today heavily deployed for data centers and cloud services.

Those 100G/200G/400G/800G transceivers support long distances of 2 km to 40 km. They currently use predominantly either Directly Modulated Lasers (DMLs) or Electro-absorption Modulated Lasers (EMLs). This article will discuss the basics of EML and DML and highlight their key differences.

DML refers to a directly modulated laser. This laser is also called distributed-feedback laser diode (DFB) since it uses distributed feedback structure for direct modulation. A DML uses a single chip with a simple electrical circuit design, so it can be an optimal choice for a compact circuit configuration with low power consumption.

DML modulates the input on/off electrical signals generated by a driver IC to place information on the optical beam. The information is then directly applied to the laser diode chip to produce a modulated optical signal.

The laser diode operates under a continuous wave (CW) condition. In an EML diode, signal modulation is on the EMA section instead of the electrical section. It means that optical output signals are generated when input on/off signals are applied to the EAM section.

The above introduction to EML and DML shows they are quite different from each other. The following part will dig deeper and highlight their differences in key aspects.

DML is designed with a distributed feedback structure, and its waveguide has a diffraction grating to enable stable operation, thus realizing direct modulation. While EML cannot have the laser directly modulated and mainly relies on an external modulator also called an electro-absorption modulator. The difference in working principle results in their different features and functions.

The following figure shows how DML and EML stack up against each other across a number of key parameters.

Due to limitations such as greater chromatic dispersion and lower frequency response, DMLs are mainly used for relatively lower speeds (≤25Gbps) and shorter reaches (2-10km) applications in telecom and data centers.

By contrast, EMLs have an upper hand in applications with higher speeds and longer distance transmission, due to its smaller chromatic dispersion. They can operate at higher speeds with a much lower chirp, making them an ideal choice in high performance long-haul coherent optical communication systems.

Naturally, EMLs are not an economical option in lower data rate (1G-10G) application as they have a relatively higher cost. 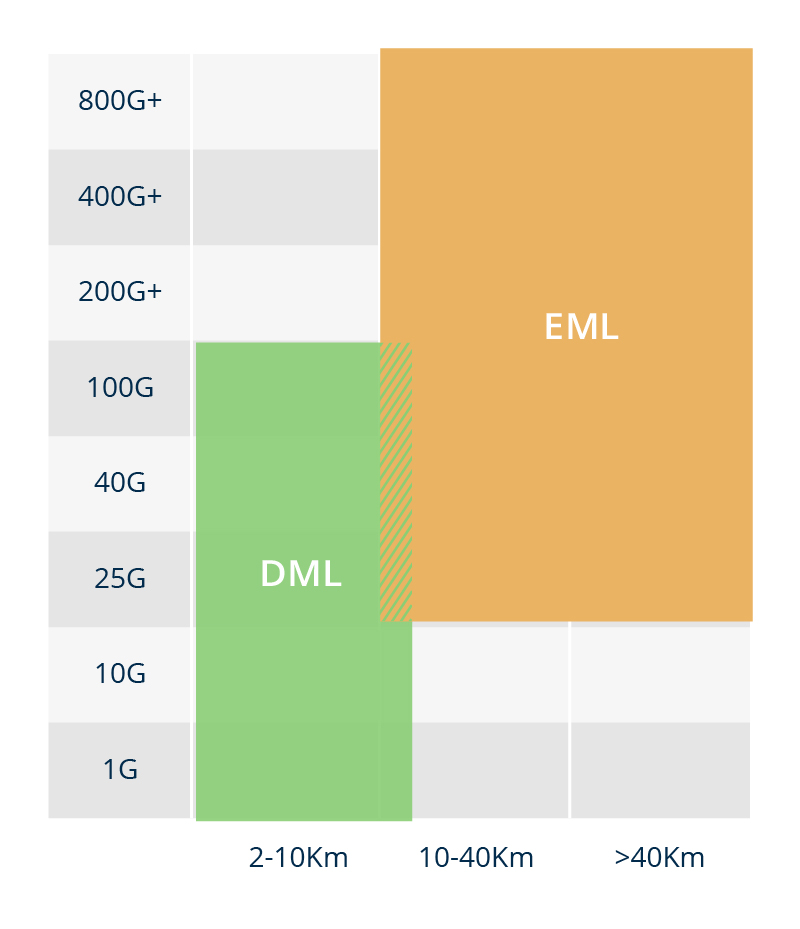 FS 100G/200G/400G transceiver modules are equipped with either DML or EML to enable high-speed data transmission of varying reaches from 500m to as far as 80km. To boost easy migration to 800G, FS 800G transceiver modules take full advantage of EML to handle distances from 500m to 10km. They prove to be a flexible and reliable choice for various applications in your diverse 100G/200G/400G/800G data center networks.

In summary, both EML and DML have their own pros and cons. They are able to bring out the best performance if used in the right application scenario. That said, you still need to take into consideration a number of factors such as network infrastructure and business budget before rushing into a decision.