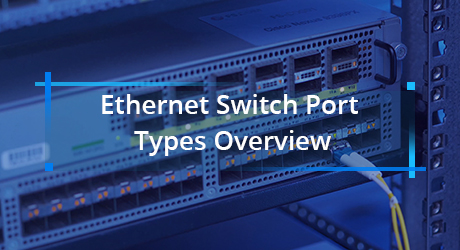 Data rate is a vitally important factor for Ethernet switch interface, and it can usually vary from 1G, 10G, 25G, 40G to 100G and beyond. The following are some mainstream interface types of these different data rates.

RJ45 port on 100/1000BASE switch can be used in data centers for server switching, LANs, uplinks from desktop switches or directly to the desktop for broadband application. A standard Ethernet cable (Cat5/5e/6/6a cable) is often used when connecting two RJ45 ports on Gigabit switches.

SFP+ port (small form-factor pluggable plus) is an enhanced version of SFP port, supporting higher speeds up to 10Gbps. In terms of SFP vs SFP+ compatibility, SFP+ ports often accept SFP optics but at a reduced speed of 1Gbps. However, you cannot plug an SFP+ transceiver into an SFP port because SFP+ does not support speeds less than 1Gbps.

SFP28 port is an enhanced version of SFP+ port. SFP28 has the same common form factor as the SFP+, but supports 25Gb/s over a single lane. SFP28 provides a new way for networking upgrade: 10G-25G-100G, which is an energy-efficient solution to meet the growing demands of next-generation data center networks.

QSFP+ port is an evolution of QSFP (quad small form-factor pluggable) port designed to 4x10G lanes to support 40G Ethernet. That’s to say, it has four-channel 10 Gbit/s SFP+ interfaces which can transfer rates up to 40Gbps.

Functions and applications are also important factors for Ethernet switch connector types as the same port can be used for various purposes. This category may be more complex, but helps us gain insights into Ethernet switch port types configuration.

Combo port is considered as a single interface with dual front ends, i.e. an RJ-45 connector and an SFP module connector. In other words, it is a compound port which can support two different physical, share the same switch fabric and port number. But the two different physical ports can not be used simultaneously. That means if the SFP port is being used, the corresponding copper port is automatically disabled and vice versa. The advantage is to provide different types of connectivity without taking up unused switch fabric, giving users the power and flexibility to configure their switch for their unique application requirements. 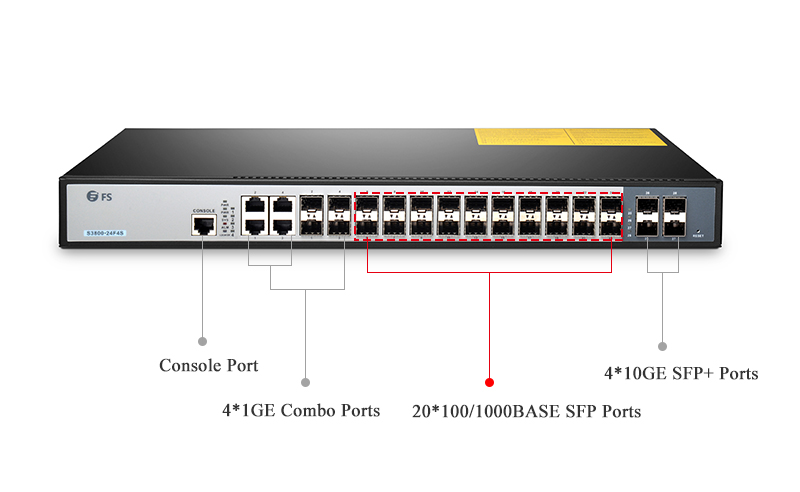 Stack port, a special functional port on the switch, is used to connect with other stackable switches of the same model, brand and software version to operate as a single stackable switch. This group of switches show the characteristics of a single switch but have the port capacity of the sum of the combined switches. Additionally, a stack port can be an uplink port, but some switches may have a dedicated port for stacking. For example, FS S3900 Series stackable switches use uplink port to achieve stacking with DAC, AOC or transceiver modules and fiber patch cables. This solution is very economical with high flexibility and ideal for long distance connection. 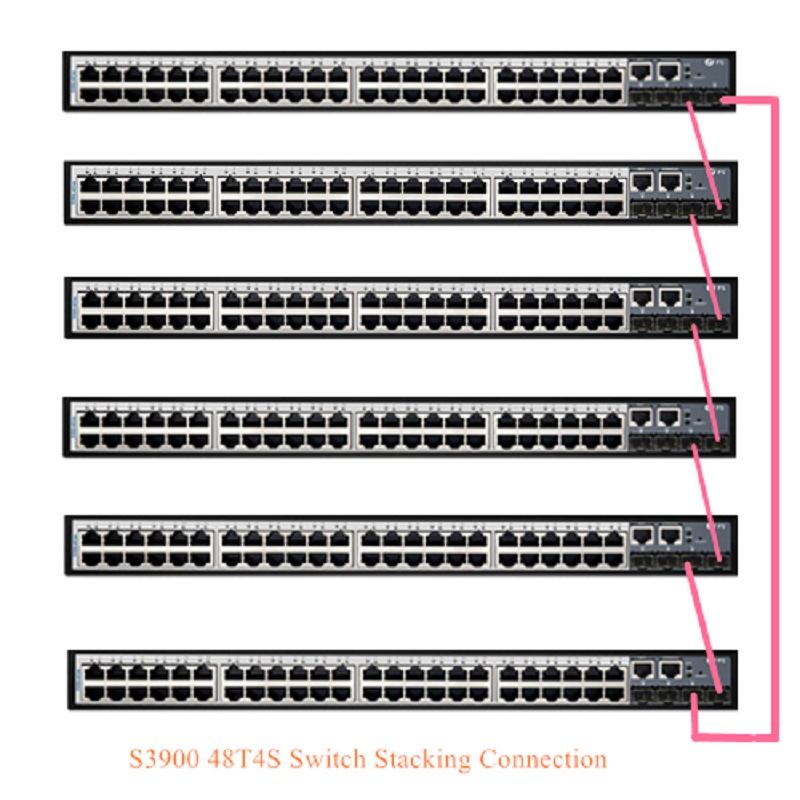 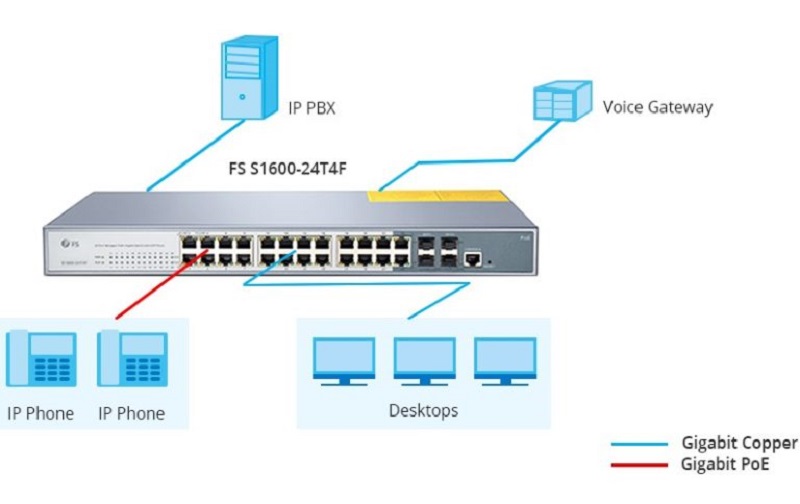 Access port is used for connecting devices such as desktops, laptops, printers etc., only available in access link. A switch port in access modes belongs to one specific VLAN and sends and receives regular Ethernet frames in untagged form. Usually, an access port can only be member of one VLAN, namely the access VLAN, and it discards all frames that are not classified to the access VLAN.

Trunk port is adopted among switches or between switch and upper-level devices, available in trunk link. A trunk port allows for several VLANs set up on the interface. As a result, it is able to carry traffic for numerous VLANs at the same time. The trunk port is a VLAN aggregation port connected to other switch ports while the access port is the port that the switch connects to the host in the VLAN.

Hybrid port can be used to connect network devices, as well as user devices. It supports both untagged VLAN like access port and tagged VLAN like trunk port, and it can receive data from one or more VLANs. The hybrid ports resemble trunk ports in many ways, but they have additional port configuration features.

The following figure shows how the three types of switch ports apply in a same system. 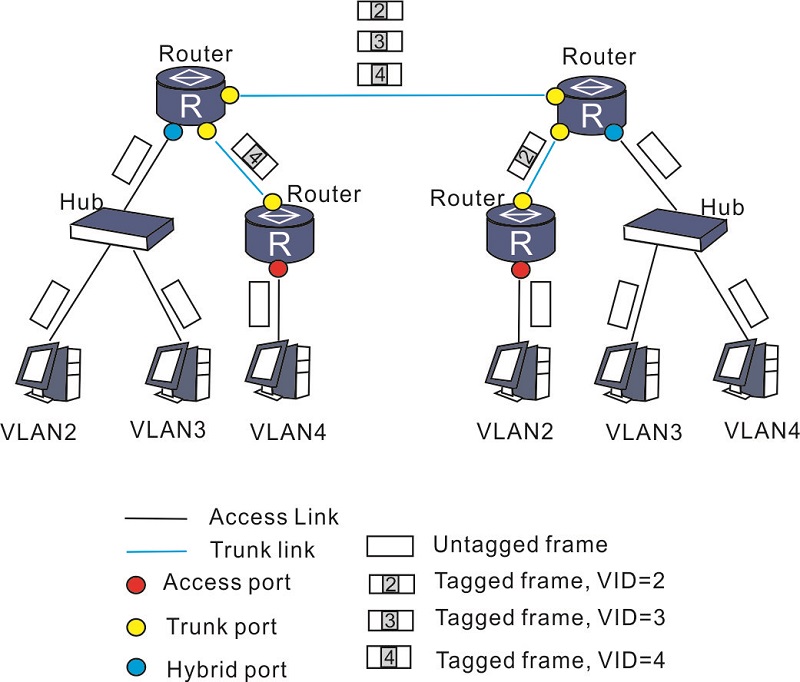 What Does Combo Port Mean for Ethernet Switch?