Extend Your Network With PoE Switch

Extend Your Network With PoE Switch

PoE (Power over Ethernet) allows network cable to provide both data and power for PoE-enabled device, which eliminates a significant number of power cords during network. PoE provides more flexibility for networking and can simplifies the installation of devices like IP camera and wireless access point. To build a network with PoE technology, PoE switch should be deployed. This tutorial will introduce the basic of PoE switch.

PoE switch is a networking device which has multiple Ethernet ports to connect network segments and provides both power and data. A PoE-enabled device can get both the data and power from a PoE network switch via a length of Ethernet network cable, like Cat5 or Cat6. This great feature is very helpful to the environment where power outlets are lacking of. IP cameras and wireless access point are the best example of PoE application.

Although PoE can provide electrical power for devices, not all devices can be powered by PoE network switch according to IEEE standard 802.3af and 802.3at. The devices require low voltage power input can be supported by PoE switch. However, for devices like computer or printer, the power supply from PoE switch won’t be enough. Thus, power consumption would be an important factor to be considered before selecting PoE switch. Not all PoE switches provide the same power consumption. Here takes the example of two 8-port PoE switches S1130-8T2F and S1250-8T2F provided by FS.com.

Port and Speed of PoE Switch

The speed and port determine the capacity of a PoE switch. Most PoE switch provided in the market has standards Gigabit Ethernet ports which can provide speed of 10/100/1000Mbps. And SFP ports and SFP+ ports are added on PoE switches to accommodate the fiber optic network for higher switching capacity. For smaller network, PoE switch with 8 PoE ports is very popular. For larger network or enterprise network, PoE switch with port count of 24 and 48 are more popular. For your reference, the following listed the basic information of FS.com PoE network switch series which can fit various applications.

PoE technology brings great flexibility to network design and deployment. PoE switch is usually connected to PoE-enabled devices for both power supply and data communication. PoE IP camera and PoE wireless access point are usually deployed in places where power cords are difficult to reach. Thus, PoE switch would be an ideal solution. The following picture shows a surveillance network powered by PoE switches. PoE IP cameras are connected to the PoE switch. The PoE switch is also connected to NVR (network video recorder) system for data storage and monitoring. 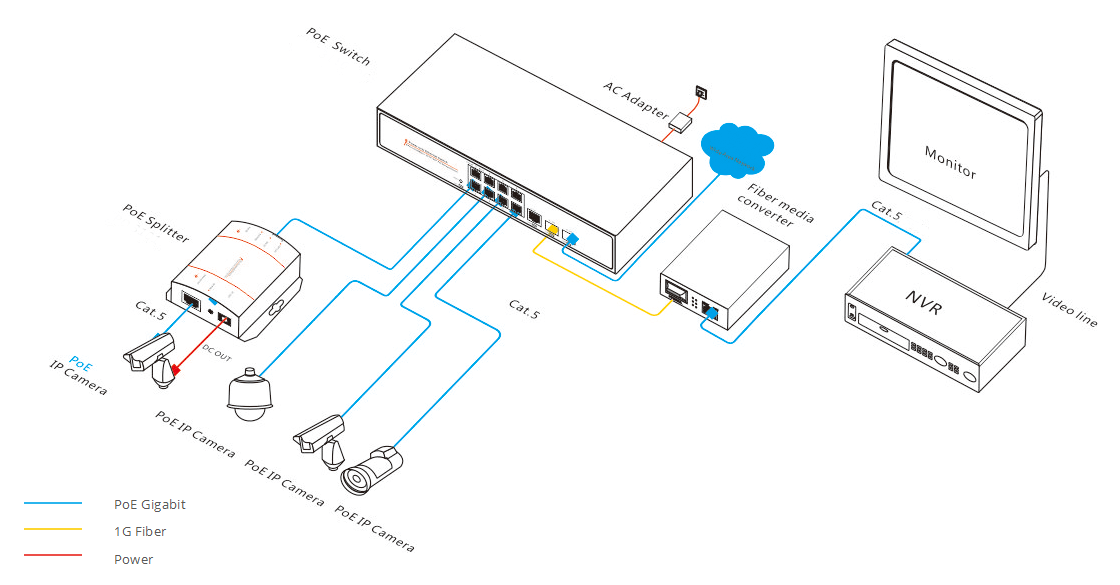 PoE saves both time and money for network deployment and maintenance. PoE switch works as the heart of a PoE network providing both data communication and power supply for the network segments. FS.com provide full series PoE solution for small and enterprise network. Kindly contact sales@fs.com for more details, if you are interested.