Fiber media converter is a cost-effective solution to overcome the bandwidth and distance limitations of traditional network cable. It dramatically increases the bandwidth and transmission distance of the local area network (LAN) by allowing the use of fiber and integrating new equipment into existing cabling infrastructure. To better understand it, this article will give an overview of fiber media converter.

The SC to RJ45 media converter comes with RJ45 and SC ports, which is designed to be used with fiber cable preterminated with the SC-type connector. The SFP to RJ45 media converter comes with RJ45 and pluggable fiber optics ports, which allows for flexible network configurations using SFP transceivers. PoE media converters can transparently connect copper to fiber while providing Power-over-Ethernet (PoE) to standards-based PoE compliant devices such as IP cameras, VoIP phones and wireless access points. Mini media converter is a miniature-sized copper-to-fiber converter. It is ideal for bringing fiber to the desktop and for mobile applications where light weight, compact size and low power are required. Industrial media converters are compact and robust devices designed to convert Gigabit Ethernet or Fast Ethernet networks into Gigabit or Ethernet fiber optic networks.

Video copper-to-fiber media converter also called fiber optic multiplexer, which is used to transmit and receive signals such as video, audio, data and Ethernet. Fiber optic multiplexers are devices that process two or more light signals through a single optical fiber (as shown in the following figure), increasing the amount of information that can be carried through a network. Since signals may be analog or digital, video copper-to-fiber can be further divided into converters transmitting analog signals and converters transmitting digital signals. As the name applies, converters transmitting analog signals give amplitude or frequency modulation of the electric signal and then convert it into optical signal. Demodulation will also be done at the receiving end. Converters transmitting digital signals, however, digitize and multiplex the video, audio and data signals, transforming multiple low-speed digital signals into one high-speed signal. This high speed signal will then be turned into optical signal transmitting on a fiber. 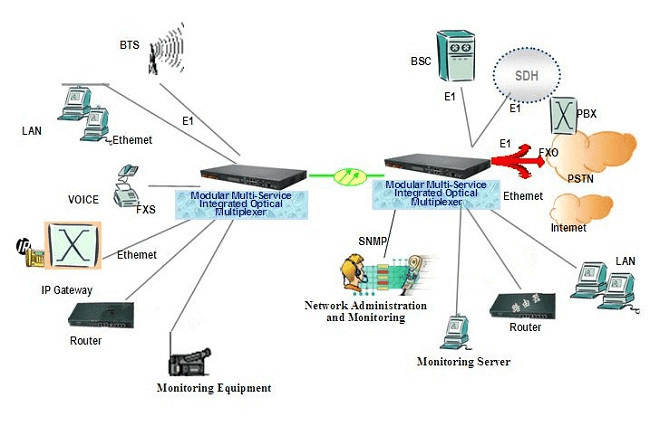 This kind of media converter provides fiber extension for serial protocol copper connections. It accepts serial data on one port in RS232, RS485 or other format and convert the serial data stream into a fiber optic signal to a matching unit at the other end of the fiber span.

Fiber-to-fiber media converters are used to extend network distance by providing connectivity between multimode and single-mode fiber, between different “power” fiber sources and between dual fiber and single-fiber. Furthermore, they also support conversion from one wavelength to another. Mode converter and WDM OEO transponder are two common types of fiber-to-fiber media converters.

A mode converter can be used to allow for an adiabatic transition between two optical modes. Other than cross-connecting different fiber types, mode converters can also re-generate optical signals, extending transmission distance and double fiber cable usage. It is usually applied in multi-mode to single-mode fiber conversion. 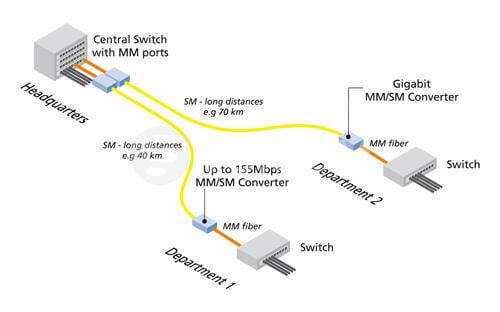 Networks may require conversion between dual and single-fiber, depending in the type of equipment and the fiber installed in the facility. The following figures shows the role of WDM transponder played in the fiber optic network.