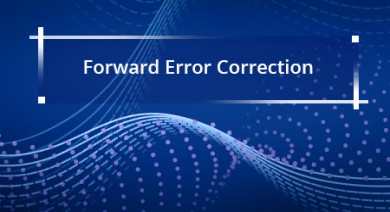 As bandwidth demands increase and the tolerance for errors and latency decreases, designers of data communication systems have been looking for new ways to expand available bandwidth and improve the quality of transmission. One solution isn't actually new, but has been proven quite useful. It is called forward error correction (FEC), a technique has been used for years to enable efficient, high-quality data communication over noisy channels. Today, with the increase of data transmission capacity and extension of distance, let’s learn more about FEC technique in optical networks.

Forward error correction (FEC) is a digital signal processing technique used to enhance data reliability. It does this by introducing redundant data, called error correcting code, prior to data transmission or storage. FEC provides the receiver with the ability to correct errors without a reverse channel to request the re-transmission of data. As we know, sometimes optical signals could deteriorate due to some factors during transmission, which may lead to misjudgment at the receiver end, possibly mistaking “1” signal for “0” signal, or “0” signal for a “1” signal. If the number of errors in transmission is within the correction capacity (discontinuous errors), the channel decoder will locate and correct the false “0” or “1” to improve the quality of the signal. 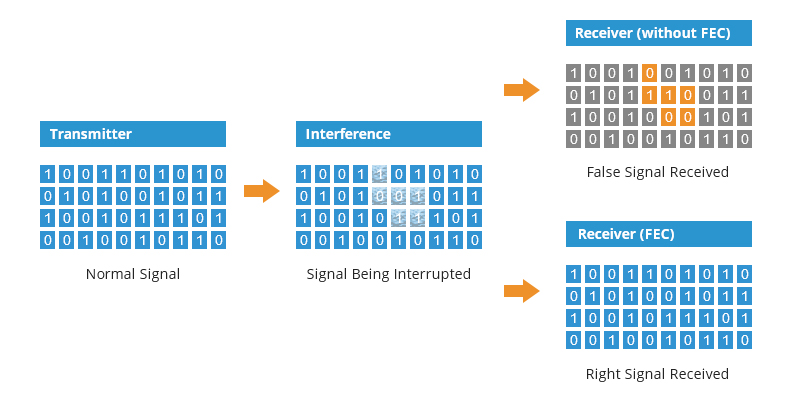 Figure 1. The Working Principle of FEC

What Are the Types and Features of FEC?

In-band FEC. In-band FEC is supported by the ITU-T G.707 standard. The supervised symbols of the FEC code are loaded using a portion of the overhead bytes in the SDH frame. The coding gain is small (3-4dB).

Enhanced FEC (EFEC). Enhanced FEC is mainly used in optical communication systems where delay requirements are not strict and coding gain requirements are particularly high. Although the encoding and decoding process of EFEC is more complicated and less applicable at present, due to its performance advantages, it will develop into a practical technology and become the mainstream of the next generation of out-of-band FEC.

FEC reduces the number of transmission errors, extends the operating range, and reduces the power requirements for communications systems. FEC also increases the effective systems throughput, even with the extra check bits added to the data bits, by eliminating the need to re-transmit data corrupted by random noise.

FEC independently increases the reliability of data at the receiver. Within a system context, FEC becomes an enabling technology that the system designer can use in several ways. The most obvious advantage of using FEC is with respect to power-limited systems. Through the use of higher-order signaling, however, bandwidth limitations also can be addressed. In many wireless systems, the allowable transmitter power is limited. These limitations can be brought on by adherence to a standard or to practical considerations. FEC makes it possible to transmit at much higher data rates if additional bandwidth is available.

Application of FEC in 100G Networks

In the context of fiber-optic networking, FEC is used to address optical SNR (OSNR) - one of the key parameters that determine how far a wavelength can travel before it needs regeneration. FEC is especially important at high-speed data rates, wherein advanced modulation schemes are required to minimize dispersion and signal correspondence with the frequency grid. Without the incorporation of FEC, 100G transport would be limited to extremely short distances. To implement long-haul transmission (> 2500 km), the system gain must be further improved by approximately 2 dB. FEC's upgrade from hard-decision to soft-decision fills this performance gap.

As the push for ever-higher transmission rates has continued, soft-decision forward error correction (SD-FEC) schemes have grown in popularity. Although these can require a byte overhead around 20% — nearly three times as large as the original RS coding scheme — the gains they produce in the context of high-speed networking are substantial. FEC that results in a 1 to 2 dB gain on a 100G network, for instance, translates to a 20% to 40% greater reach.

What to consider when configuring FEC in 100G networks? It is suggested to pay attention to the following tips.

Some special modules have their own FEC functions, such as the FS 100G CFP conversion module. While 100G QSFP28 optical module mainly relies on FEC function configuration on the device to realize error correction, such as 100G switches.

Whether the Switch Supports FEC

The configuration of FEC on 100G switches can be achieved only if the switch supports it, and not all switches do so. While all 100G switches provided by FS support FEC.

Note: FS 100G switches have FEC enabled by default. If required to enable it after turning off, the FEC enable command can be configured.

Whether to Enable FEC on 100G QSFP28 Transceivers

FEC Function Consistency at both Ends of the Link

The role of FEC has become of critical importance in fiber optic communications, as backbone networks increase in speed to 40 and 100G, particularly as poor optical-signal-to-noise environments are encountered. Such environments become more commonplace in higher-speed environments, as more optical amplifiers are deployed in networks. With all these developments, FEC will continue to play a role in future networks. To ensure normal operation of the network, it is recommended that you pay special attention to the FEC function on optical modules, which will help you improve the performance in data transmission.