Open source networking is becoming the new norm in the world of computing. Based on complete separation between hardware and software, it is valued for the ability to deliver an agile, scalable and programmable network that can quickly adapt to the changing requirements. The networking industry is making a decisive move toward open switch: web-scale giants like Google, Facebook and Amazon is integrating open networking switches in their data center. And reputable hardware providers like Cisco, Juniper, Arista also initiated to offer brite-box (brand white box) switches that pre-loaded with the vendor’s proprietary operating system and support/maintenance services. Additionally, the surging virtualization and cloud computing service also call for greater visibility, efficiency and simplified operation of network, making the ability to automatically provision data center an imperative.

Open networking and automation seem to be irresistible and revolutionary trends that will transform the landscape of the data center. In this case, FS teamed up with Cumulus Networks to provide the N-series Layer 3 open switches aiming for data centers and high-end campus networks, in the hope of breaking the limitation of traditional proprietary system and scaling network in a more efficient way. The new supportive partnership is another example of our commitment to offer more agility and lower costs than proprietary networks with open, standards-based switches. 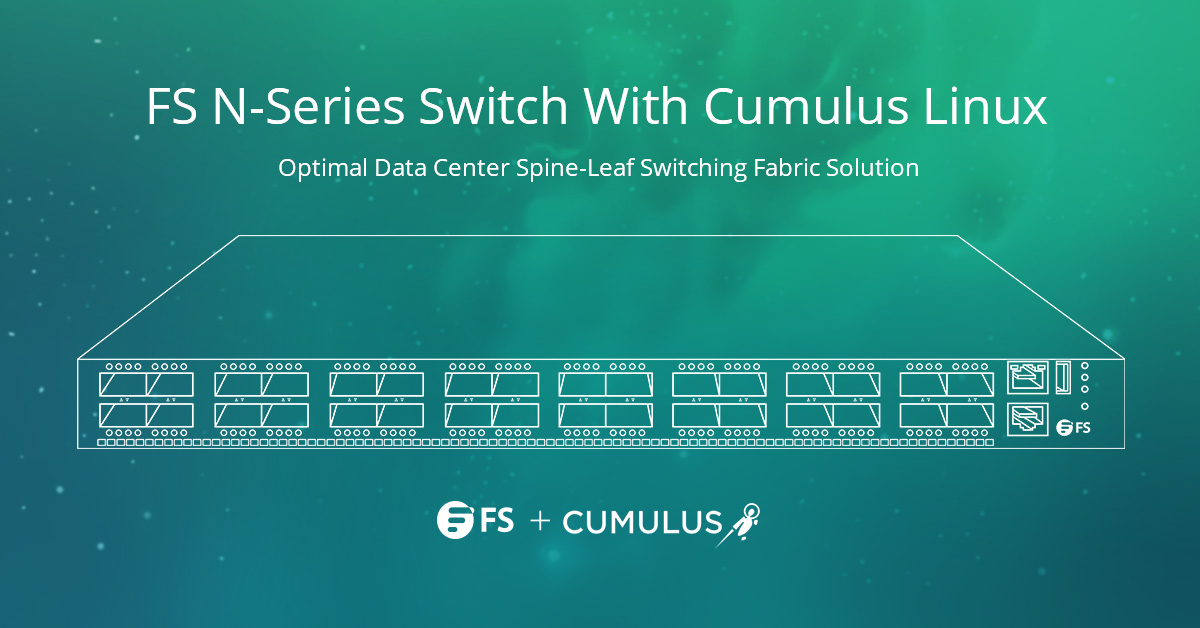 Open switch and open source software are hitting mainstream adoption in the past years. FS has been investing and developing open networking switches for many years, and great efforts have been made to improve the quality, stability and performance of our hardware platform: they have the state-of-the-art chipset, more CPU and faster processors. Advanced features including EVPN, MLAG are being integrated to our complete product line of 10GbE, 25GbE, 40GbE, and 100GbE N-series Spine-Leaf/ToR switches. Besides, FS is always dedicated to provide Linux-based switching solutions, and the strategic partnership with Cumulus Networks is hence the logical move.

Cumulus Networks is the leader for automating the network and its network operating system, Cumulus Linux, has ranked as the most reputable NOS among other open source software. They also offer support for server automation tools and a native Linux interface to let a switch behave exactly like a Linux server. More significantly, Cumulus Linux based data center switches will have nearly identical configurations, due to its effort to simplify the provisioning of switches by reducing the number of unique configuration parameters needed per switch. The supportive cooperation of FS and Cumulus can be beneficial in the following aspects.

Superior Network Automation With the powerful, networking-focused Cumulus Linux running on top of FS high performance hardware, the N-series data center switches offer a completely open architecture and are designed for easy automation using existing applications. Users could leverage many of the server tools to automate their network orchestration and monitor activities, as well to achieve web-scale IT efficiency.

Unmatched Network Agility You can customize and provision your network based on your specific business needs and budget, and to leverage any applications across the network for a fully web-scale solution. FS N-series data center switches with Cumulus Linux also enable faster innovation cycle and adapt well for the changing networking environment, helping avoid vendor lock-in existing in traditional propriety black box switch. Therefore, users can gain greater agility, scalability, and operational simplicity to catch up with the growing capacity and performance demands.

What to Expect From the N-series With Cumulus Support?

Running Cumulus Linux on FS N-series standard based switches gives our customers the value of the leading Linux NOS along with high performance and reliable switch platform, enabling stable, reliable and secure Layer 2/3 services and web-scale IT efficiency to the data centers. Moreover, this tried-and-true combination of N-series switches and Cumulus Linux creates an open networking platform to manage the network so it could meet your specific needs and to accelerate innovation and automation of the network infrastructure. Together with other advanced functions like EVPN, MLAG, VxLAN, SFLOW, SNMP, etc, FS N-series switches free users from Layer 2 complexities and extend Layer 2 applications to operate over Layer 3 networks. The EVPN function of N-series switch brings integrated Layer 2 and Layer 3 services and enables more flexibility for service delivery over Layer 3 networks.

The future of networking is fast approaching - and it’s in the open source switches and software. FS N-series switches with Cumulus Linux help keep everything affordable and available, while holding the potential for unprecedented web-scale IT efficiency and operational agility. As the consumer-driven data and cloud-based services is surging, it will soon push the legacy networks to their limits. FS N-series data center switches present a vendor-independent approach with improved resilience, higher scalability and operational efficiency, which could be the optimal choice to justify the ever evolving network demands.