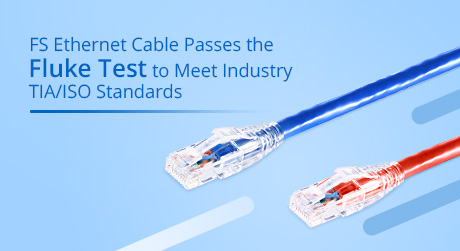 An Ethernet cable or network cable plays an integral role in setting up highly reliable and secure wired connections for both residential and commercial purposes. Some network cables on the market fail to meet the TIA or ISO performance requirements and frequently result in network downtime and troubleshooting for mission-critical applications.

To perform reliably and up-to-spec, Ethernet cables need to be certified by the Fluke Test in a professional and graphical manner to meet some rather exacting specifications defined by the industry TIA/ISO standards. Which types of testing certifications are defined in the Fluke Test and how are they associated with the Ethernet cable performance? How to read each type of Fluke Network Test reports? This post will expound them one by one.

What Is Fluke Test for Ethernet Cable?

Fluke Test is a series of industrial tests and measurements for physical links conducted with the Fluke Network Cable Analyzer which can provide “Pass” or “Fail” information in accordance with industry standards. It provides a level of assurance that network cabling links have the desired network transmission capability to support the data communication desired by the users. In the Fluke Test, patch cord testing, channel testing and permanent link testing are predominated adopted by installers and end-users to verify the performance of the installed twisted-pair cabling links.

What Is Patch Cord Testing in the Fluke Test?

What Is Channel Testing in the Fluke Test?

TIA and ISO standards define the channel of copper cabling as the complete end-to-end link over which active equipment on the network communicates. In a copper network, the channel is the connection between two devices, including any patch cords used for cross-connects or interconnects between them. In the LAN, the channel testing could be done from a distribution switch in a telecommunications room all the way to the network card in a laptop. Channel testing can be carried out with Ethernet patch cables, pre-terminated trunk cables and bulk cables. The overall length of the channel, including the cabling and any cords should not exceed 100 meters per industry standard guidelines. The requirements for cable performance in channel testing is less strict than that of the patch cord testing, thus network cables that pass the channel testing can not always pass the patch cord testing.

What Is Permanent Link Testing in the Fluke Test?

The permanent link refers to the ‘permanent’ or fixed part of the copper network which comprises of components that will permanently stay in place such as a patch panel, LAN cable and an outlet. Permanent link testing is used to verify the performance of the installed twisted pair cabling links including pre-terminated trunk cables and bulk cables in the field, thus being considered as the true foundation of the network. In the Fluke Test, the permanent link testing excludes the equipment cords because it only measures the fixed portion of the channel, typically patch panel to patch panel in the data center or patch panel in the telecommunications room to work area outlet or consolidation point in the LAN. The maximum permitted length of the permanent link is 90 meters.

What Is Fluke Test Report of Ethernet Cable and How to Read It?

After testing some recently installed copper network runs, you can easily see on your tester if the link failed or passed for the application you were testing by noticing whether it reports a ‘pass’ result or an asterisk result. But what does each of the parameters on the reports indicate and how to explain those pretty charts to the right? Let's dive deeper into each of the parameters first on the report.

NEXT (Near-End Crosstalk) - the difference in amplitude (in dB) between a transmitted signal and the crosstalk received on other wire pairs at the same end of the cabling.

PS NEXT (Power Sum Near-End Crosstalk) - the difference (in dB) between the test signal and the crosstalk from the other pairs received at the same end of the cabling.

ACR-F (Attenuation Crosstalk Ratio Far-End) - a calculation of FEXT minus Insertion Loss of the disturbed pair in dB.

ACR-N (Attenuation Crosstalk Ratio Near-End) - a calculation of NEXT minus Insertion Loss of the disturbed pair in dB.

PS ACR-N (Power Sum Attenuation Crosstalk Ratio Near-End) - a calculation of PS NEXT minus Insertion Loss of the disturbed pair in dB.

RL (Return Loss) - the difference (in dB) between the power of a transmitted signal and the power of the signals reflected back.

Regardless of the parameter, the test report shows the worst case margin and values for both the main test unit (MAIN) and the smart remote unit (SR). Worst case margin is based on where the value came the closest to the limit line, which is what you should be most concerned about. Worst case value is the amount of margin at the point where the value was the worst overall but not in relation to the limit line. Therefore, the larger the value, the better the result for all of the above mentioned parameters. Let’s take a closer look at the detailed results for each link tested using FS Ethernet cable sampling.

Report 1 certifies the performance of FS Cat6 patch cord itself. Since patch cord testing is the most stringent type of certification in Fluke Test, it only has two critical performance parameters namely the NEXT and RL to certify whether the patch cord meets TIA or ISO transmission standards. The larger the value, the better the result. The report indicates that both NEXT and RL of FS Cat6 patch cables surpass the limit line and have passed the Fluke Patch Cord Testing successfully.

Report 2 certifies that FS quality compliant Cat6 trunk cable has passed the Fluke Channel Testing. The rest shows the worst case margins and worst case values for the worst pairs and at what frequency they occurred and detailed graphical results for NEXT, PS NEXT, ACR-F, PS ACR-F, ACR-N, PS ACR-N and RL. Since all these parameters indicate the allowable values left behind, the larger the value, the better the result. The plot data below indicates that the values of NEXT and RL are clearly much better than industry standards. 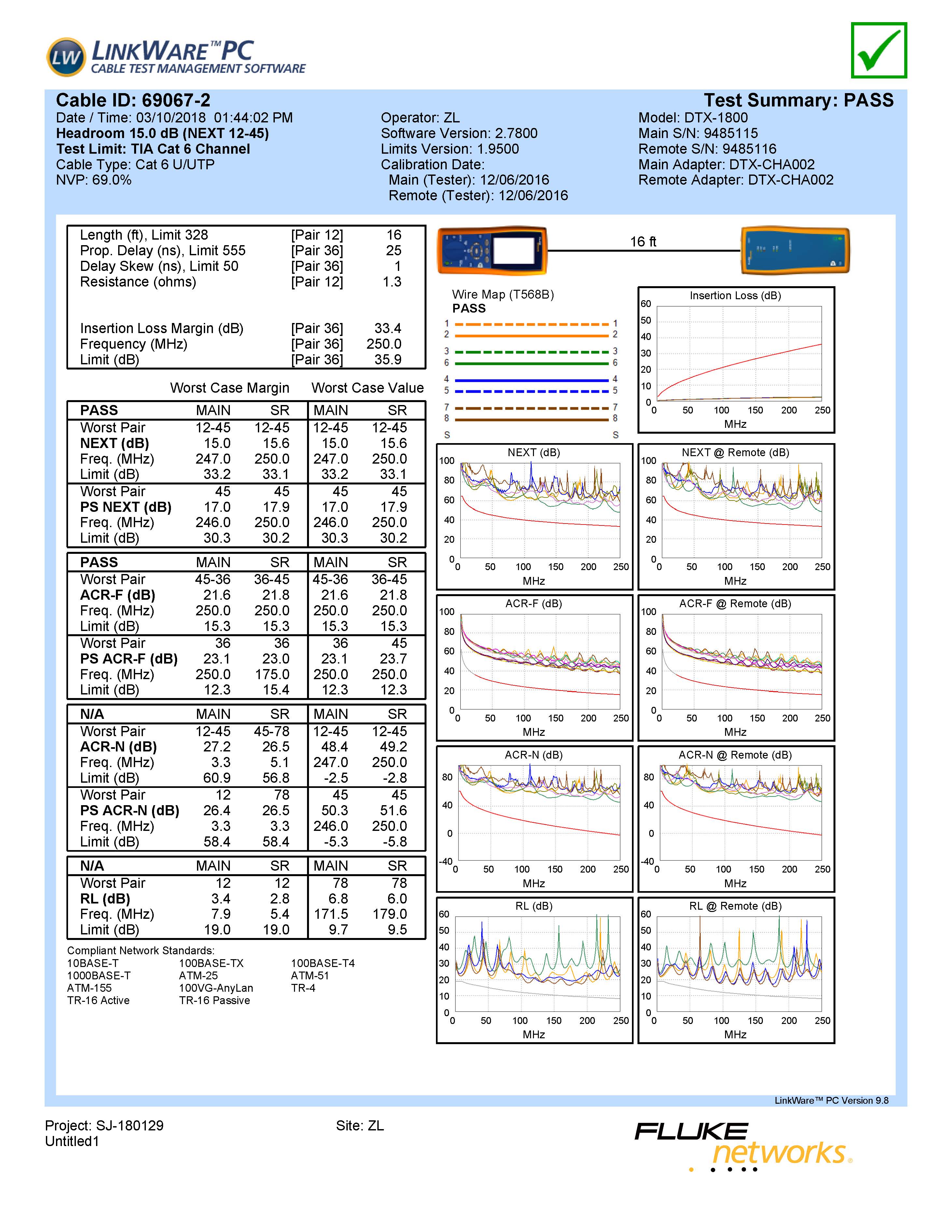 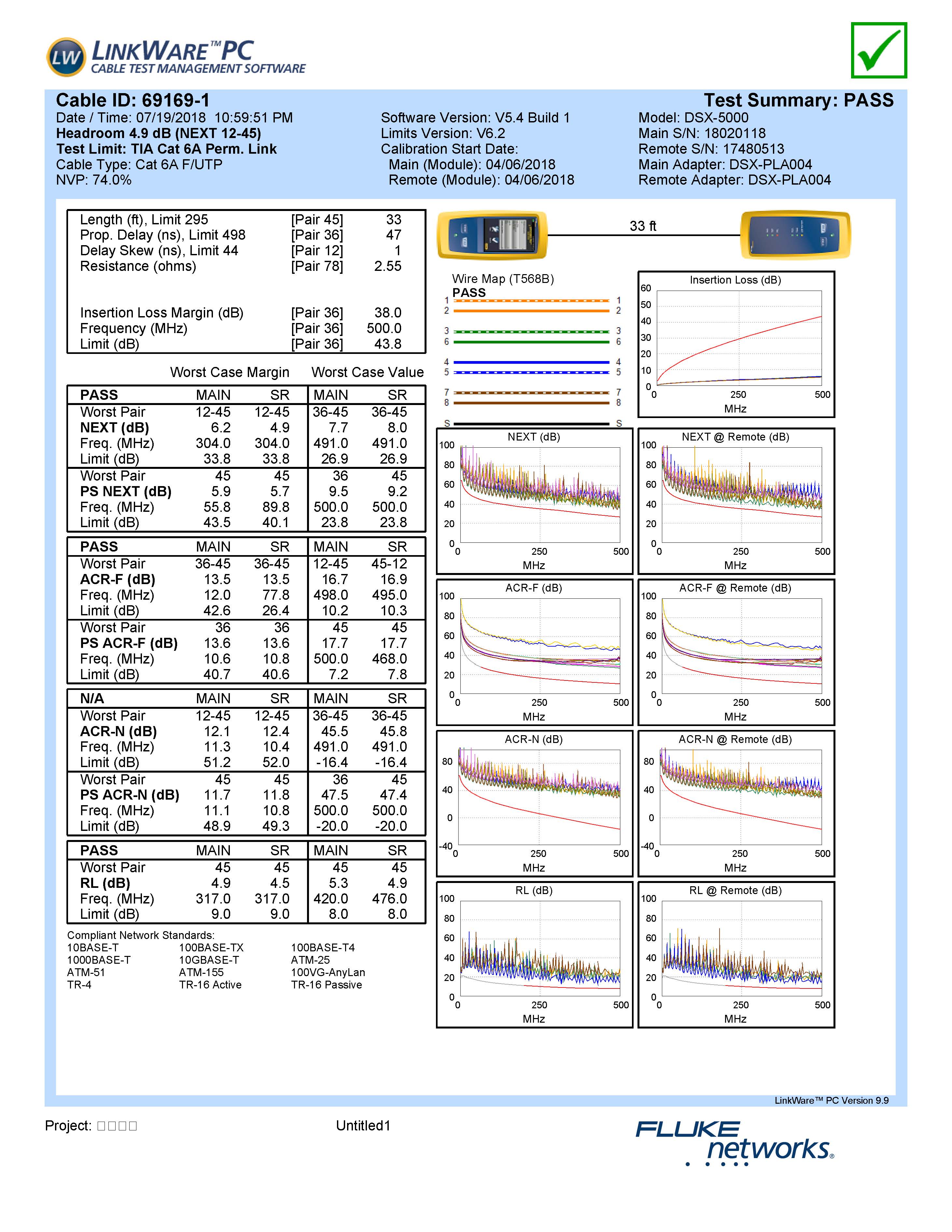 In today’s constantly developing network industry, the copper cabling infrastructure that supports a network is required to provide the appropriate transmission capability in order to support the data communication that is required by its end users. Due to market need and the conclusions from the Fluke Test program, all of FS patch cords are 100% tested to the full requirements of industry TIA/ISO standards. These Ethernet cables including Cat5e patch cable, Cat6/6a patch cable, Cat7 cable and Cat8 cable have sufficient performance margin to support 1000Base-T/10GBase-T and even 25GBase-T/40GBase-T applications in data centers networks. Best of all, every patch cord is backed by actual test data, assuring the buyers or end users to get the performance they paid for and have the right to expect.