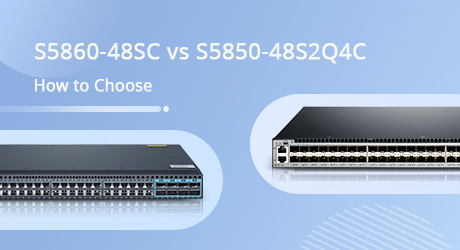 FS offers a series of enterprise switches and data center switches to meet varied application requirements for different users. But it may be difficult for newcomers to tell how to choose the right one due to the vast Ethernet switch series and names. This article mainly introduces the differences between FS S5860-48SC and S5850-48S2Q4C layer 3 managed enterprise switches, to help you guys get the right solutions.

Jump to the section where you want to know about the differences:

You can check out the video and image below to have a look at these two switches:

Here are several points for reference when making a choice between these two switches.

Firstly, let's have a look at the switch stack and MLAG (Multichassis Link Aggregation Group). These two functions are able to improve link reliability, expand network bandwidth and share transmission load. And switch stack has the advantages of relatively simple configuration and design, but its flexibility, reliability, and upgrade complexity are not as good as MLAG. MLAG is more complex compare to switch stack, but it provides better flexibility for network control and design, and it is more reliable for large networks.

More about MLAG vs. Stacking vs. LACP

Both the S5860-48SC and S5850-48S2Q4C managed switches have abundant network security policies. For example, the two Ethernet switches support various ACL policies, DHCP Snooping, SSH, CPU Protection mechanism, etc. And due to the different applications, the network security features of these two switches also have slight differences. Users should read the following datasheets carefully to make sure the Ethernet switch you choose can meet your network security requirements.

The S5860-48SC and S5850-48S2Q4C switches support various network management and maintenance methods, which are listed in the first chart. No matter for single users, or for company network engineers, using a familiar network management way is important to save time and labor cost. So for this point, just choosing the needed way is ok.

For this point, the S5860-48SC and S5850-48S2Q4C managed switches can meet the operation needs of both enterprise and data centers. Both of them have a high-reliability hardware design. They support the 1+1 redundancy AC power supply and 4 hot-swappable fans (3+1 Redundancy) for stable hardware performance. Besides, the S5850-48S2Q4C layer 3 switch also supports customizing DC power supply to meet different users' needs. And the S5860-48SC managed switch adopts smart fans that can intelligently control the fan speed according to the current temperature to ensure the stable operation of the device while reducing power consumption and noise.

Based on the several factors above, users can tell which one is more suitable for their needs and applications. If there is still a problem on choosing between S5860-48SC and S5850-48S2Q4C switches, please visit our website www.fs.com and contact FS technical support.