FS CommunityKnowledge CenterGateway vs Firewall: What Are the Differences?

Gateway vs Firewall: What Are the Differences?

Network security is one of the most important aspects to consider when working over the internet, LAN or other methods, no matter how small or big your business is. Both gateways and firewalls are important network protection devices that can detect and address potential security risks in the operation of computer networks in a timely manner, providing users with a better and safer experience of using computer networks. So what are the differences between the gateway and firewall? Find the answers in this article.

A gateway is a network hardware device or network node designed for connecting two different networks together, allowing users to communicate across several networks. The most common gateways are computers and routers connecting an enterprise to a network. They are essential for communication between terminals connected to heterogeneous networks with different network characteristics and using different protocols.

What Is Firewall in Networking?

The firewall is designed for monitoring incoming and outgoing network traffic and deciding whether to allow or block specific traffic based on a set of security rules. It can establish a barrier between your internal network and incoming traffic from external sources (such as the Internet) in order to block malicious traffic like viruses and hackers. 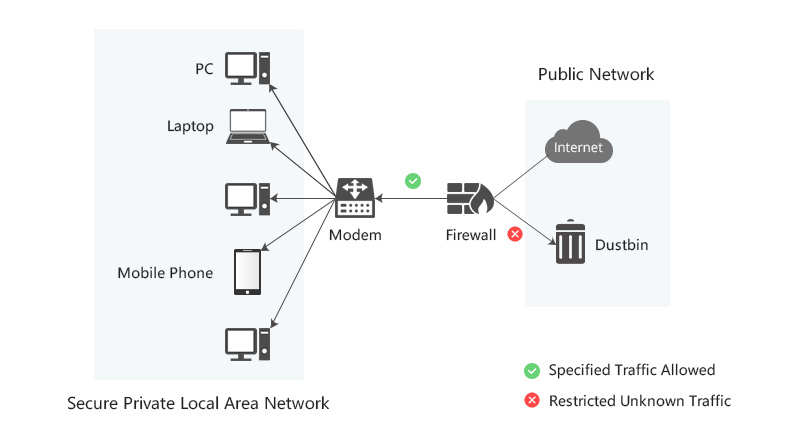 What Are the Differences between Gateway and Firewall?

The differences between the gateway and firewall will be demonstrated from the perspectives of purpose, function, working principle and application in the following descriptions.

Gateway is able to make communication possible between two different networks with different architectures and protocols. They can be implemented either as hardware, software, or a combination of both. Although the security gateway can be applied for protecting the network but the safety lever is not as high as the firewalls.

Firewalls can safeguard your computer by preventing unauthorized users or hackers from accessing private networks connected to the Internet. Firewalls basically block suspicious traffic like viruses and hackers and the main purpose of firewalls is to keep your network from danger.

According to its functions, the gateway can be classified into three types: protocol gateway, application gateway, and security gateway. Protocol gateway is used for protocol conversion between networks using different protocols, which is the most common function of gateways. The application gateway can connect two different applications at the application layer, which is suitable for protocol translation for a particular application. As for the security gateway, it can offer protection against online security threats by enforcing company security policies and filtering malicious internet traffic in real-time. Also, there are multi-service gateways in the market, which use high performance multi-core architecture and integrate functions such as stateful firewall, VPN gateway, network traffic control and so on, making them ideal for small and middle-sized networks.

Gateways usually operate at OSI Layer 4 or higher, and typically translate the protocols to allow terminals on two different networks to communicate with each other. Gateways can be both hardware and software, or a combination of both. So the working principles are determined by the functions they performed. The following picture shows the working procedures of the application gateway.

Firewalls carefully analyze incoming traffic based on pre-established rules and filter traffic coming from unsecured or suspicious sources to prevent attacks. Firewalls guard traffic at a computer’s entry point, called ports, which is where information is exchanged with external devices.

Basically, the firewall works like security guards in front of the house gate and identifies visitors who come, while filtering intruders trying to enter a personal computer. It can filter computer traffic using IP addresses, port numbers, and protocols. For example, think the IP addresses as houses, and port numbers as rooms within the house. Only trusted people (source addresses) are allowed to enter the house (destination address). Then it’s further filtered so that people within the house are only allowed to access certain rooms (destination ports), depending on the character they act (owner, children or guest). The owner is allowed to any room (any port), while children and guests are allowed into a certain set of rooms (specific ports).

Generally speaking, both gateways and firewalls can be used between the Internet and intranet/LAN. But when gateways are the network devices like routers or switches, these kinds of gateways can be used with firewalls in the same network (For more details, please visit: Network Switch vs Network Router vs Network Firewall). If you want to connect two different networks with different protocols, the gateways can suit your demands. Or you would like to prevent your network from being attacked by the hacker or other threats, the firewalls might be your ideal solution. The technology and capabilities of gateways and firewalls will continue to evolve and become more sophisticated over the next few years. Both of these security solutions are an important part of any organization's security architecture.