FS CommunityKnowledge CenterGPU Server 一 How does It Boost Your Business

GPU Server 一 How does It Boost Your Business

As we all know, the network server is a very important facility on the Internet with carrying different amounts of traffic access, which requires the server to have fast throughput, high stability, and high reliability. The GPU server we discuss here is a server with high performance that differs from other types of network servers. The application of GPU servers in data centers can be a revolution for enterprises in data processing and analytics.

To begin with, we need to understand what is GPU (Graphics Processing Unit). The appearance of GPU is mainly to ease and improve the visual display aspect of a computer. Originally, it was a technology developed specifically for the gaming industry to process algorithms and render 3D images on 2D displays. However, decades later, the contribution of the GPU goes far beyond the processing of graphics. In various applications, it is found that GPUs can perform complex calculations better than CPUs (Central Processing Units).

There are main differences between CPU and GPU:

Based on the difference between them, the GPU can be used to double the workload or a shorten of the computing time. Hence, GPU servers have been widely used in data centers, virtualization, and cloud computing, bringing great benefits to enterprises.

What is a GPU Server?

A GPU server is a type of computing service with a GPU card that provides fast, stable, and flexible computing, being used in various application scenarios such as video encoding and decoding, deep learning, scientific computing, etc. Due to its excellent image processing ability and efficient computing performance, GPU servers are extremely competitive in server products, especially in computing performance.

What Makes a GPU Server Different from Other Servers?

The role of the GPU is to render after constructing the information input by the system. At the same time, it uses buffer memory for data processing and storage. This operating principle separates the functions of graphics processing, which not only improves the visual experience but also reduces the pressure on the overall operation of the computer.

The gradual evolution of the intelligent era will take computing power as the real productivity, and the value of GPU lies in improving computing power. High-performance computing power simplifies complex IT environments, effectively relieves the computing pressure of computers, and helps enterprises process data efficiently. This is one of the advantages of GPU servers over other types of servers.

The GPU server with high-capacity storage can meet the daily operation needs and can support the high-end configuration of cloud services of various infrastructures, which can not only meet the needs of customers but also improve the operation level.

How does a GPU Server Work for Your Business?

As mentioned above, GPU servers will be a great thing for enterprise networks. But in fact, these industries may need GPU servers more than others, including manufacturing, engineering computer design, scientific research, biometrics, healthcare, oil & gas, media & entertainment, and more. The common feature of these industries is that they all tend to work with graphics more so than others.

The benefits that GPU servers can bring to enterprises or industries are as follows: 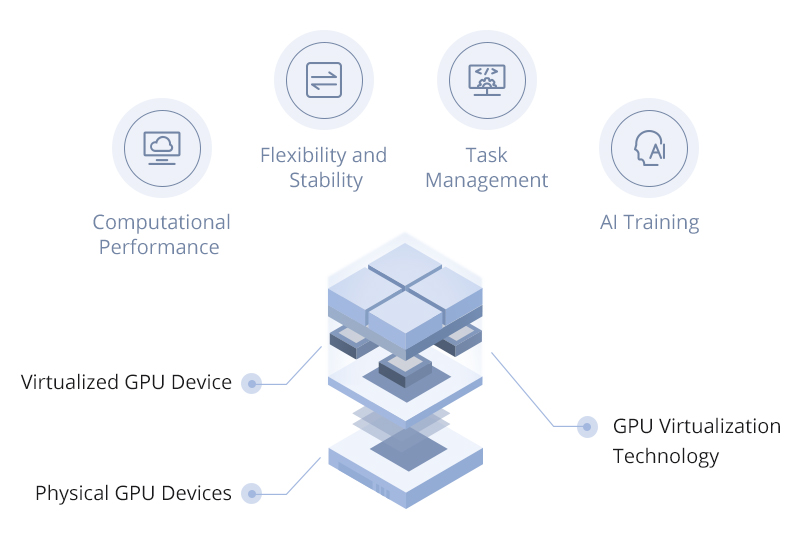 Explore the Future of a GPU Server

From AI, machine learning, deep learning, big data manipulation, 3D rendering, and even streaming, the need for high-performance GPUs in the various industry is unquestionable. Based on this, we can find that GPU servers are of great help to modernization. Deep learning deployments utilizing GPUs can greatly reduce the size of hardware deployments and improve scalability, which significantly reduces training and ROI time, and lowers overall deployment TCO.

In addition, deploying a GPU server in the cloud can achieve the function of deep learning inference, which means that a well-trained neural network is deployed in a production environment for inference with the main purpose of identifying spoken words, images, and prediction patterns. This shows the importance of server processor speed, especially when the workload is dealing with real-time forecasting. Of course, throughput, latency, and network reliability also play critical roles and cannot be ignored.