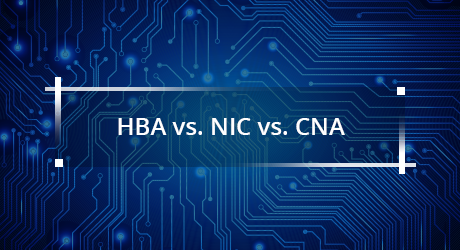 HBA vs. NIC vs. CNA: What Are Their Differences?

HBA, NIC, and CNA are three adapter types commonly used in computer or storage networks. All perform to connect a host system to storage and/or network devices, then what are the differences between them? In this blog, knowledge of HBA vs. NIC vs. CNA cards will be provided.

HBA, short for host bus adapter, is a circuit board or integrated circuit adapter, which enables input/output (I/O) processing, and provides a physical connection between the server or host I/O bus and the storage or other networking devices in a storage system like a SAN (Storage Area Network) or DAS (Direct-Attached Storage) network. By using an HBA card, the host microprocessor of tasks of storing data and retrieving data can be greatly relieved. Although the HBA card has been widely applied in all kinds of interconnections, it is most commonly used for Fibre Channel (FC), iSCSI (Internet Small Computer System Interface), and SAS (Serial Attached SCSI) protocols enabled connections. According to the protocol supported, there are different types of HBA card, such as FC HBA card, iSCSI HBA card, and SAS HBA card.

What Is a Network Interface Card?

Network interface card, short as NIC, is also named as LAN (Local Area Network) card or network adapter. It is an expansion circuit board to have devices like computers and network servers to be connected over a network. To know more about NIC, you can read the post: What Is a Network Interface Card - NIC Definition, Function & Types.

What Is a Converged Network Adapter?

Converged network adapter, short as CNA, is also known as a converged network interface controller (C-NIC). As its name shows, this hardware component can converge the functions of HBA with NIC together. One the one hand, CNA cards, with PCIe interfaces, provides connectivity and data transfer between storage devices or servers and FC based SANs; one the other side, it directly delivers Ethernet traffic from the same network devices to the LANs.

HBA vs. NIC vs. CNA: Comparison and Contrast

As three types of circuit boards, HBA, NIC, and CNA cards are all able to provide data processing and physical connection for devices. However, these cards, with their unique features and working mode, are used in different applications.

HBA card: As we mentioned above, different types of HBA cards are used to support different protocols. For a Fibre Channel HBA adapter, it is typically inserted in an HBA server and connected to a Fibre Channel switch via a fiber optic cable. Mostly, the FC HBA card is preferred in an FC SAN network. While iSCSI HBA card, it comes with an RJ45 port or a fiber port, which can be connected with the twisted pair cable or optical cable. Sending SCSI commands to storage devices on remote servers over a TCP/IP network, the iSCSI HBA card is often adopted in the iSCSI-based IP SAN network. As for the SAS HBA type, using the SCSI command set, is deployed to connect SATA (Serial Advanced Technology Attachment) or SAS compatible devices. It is prevalent in a SCSI enabled DAS network.

NIC card: Based on the Internet Protocol (IP), the network interface card can be found in two types: with optical ports or electrical ports. HBA card vs. NIC card, the latter usually connects to the Ethernet switch through fiber optic cable or twisted pair. Nowadays, most traditional NIC cards in the market are iSCSI and NAS protocols enabled, which can be applied in IP SAN and NAS networks.

CNA card: HBA vs. NIC vs. CNA, the converged network adapter can combine the functionality of both the other two adapters into one and support FC and Ethernet protocols on a single interface port. Conventionally, Ethernet is used for TCP/IP networks and Fibre Channel for storage networks. With a CNA card, Fibre Channel will be transported directly over Ethernet to an Ethernet port on an FCoE enabled switch. Then the converged switch converts FC traffic to the FC SAN and Ethernet traffic to the LAN.

However, as the above diagram shows, if a network is without CNAs, servers have to have at least two adapters—an FC HBA to connect the server to a storage network and a NIC card to connect the server to the LAN. So in data center SANs, the CNA cards are preferred to be applied, which can reduce costs by requiring fewer adapter cards, cables, switch ports. Especially, in a high-density network, CNAs help to reduce the complexity of administration because there is only one connection and one cable to manage.

From HBA vs. NIC vs. CNA mentioned above, it’s easy to find that HBA, NIC, and CNA cards all have their own features, which are applied accordingly. Deploying what type of card not only depends on the protocols the cards supported, but also your network environment and your budget.