What Is Fiber Optic Coupler?

Usually, optical signals are attenuated more in an optical coupler than in a connector or a splice because the input signal is not directly transmitted from one fiber to another, but divided among the output ports. For instance, with a 1 x 2 fiber optic coupler, each output is less than one-half of the power of the input signal (over a 3dB loss).

Technologies used for constructing optical couplers can be complex and difficult to understand. Three major manufacturing techniques are micro-optics, fused-fiber, and planar waveguide.

Fused-fiber couplers used the most basic material–optical fiber. Two or more fiber cores are twisted, fused and tapered together in a length.

If we see optical couplers by shape, there is Y coupler, T coupler, X coupler, star coupler and tree coupler, which split the optical signal based on the power.

Unlike the Y coupler, a T coupler has an uneven power distribution. The power of one output signal is greater than the other output signal. Popular splitting ratios include 10:90 percent and 20:80 percent. This optical coupler is often used in small networks with less port counts.

X couplers carry out the function of a splitter and a combiner in one package. The X coupler combines and divides the optical power from the two input fibers between the two output fibers. Another name for the X coupler is 2 x 2 coupler.

Classified by Bandwidth or Window

Bandwidth or Window is also a factor to consider when users choose the optical coupler types. Regardless of the port types used, fiber optic couplers can be designed for single window, dual wavelength or wideband transmissions.

In a star network topology, the stations branch off from a central hub, much like the spokes on a wheel. Each network device connected by the star coupler can communicate with each other. Besides, the star coupler makes it easy to expand the number of workstations. For example, changing from a 4 x 4 to 8 x 8 doubles the system capacity. 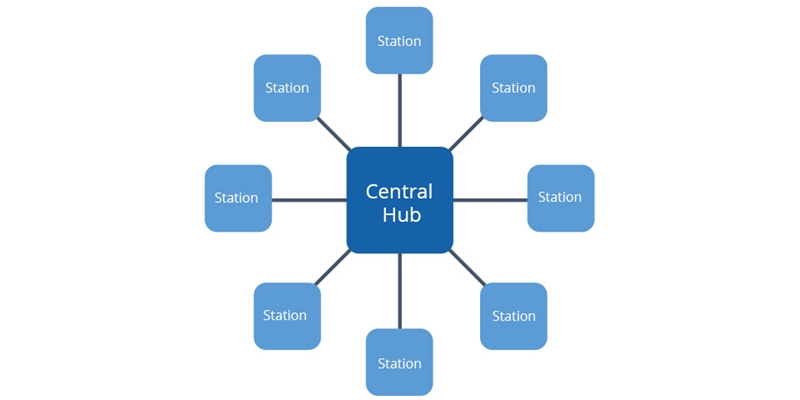 Bus architecture utilizes T couplers to connect a series of stations to a single backbone cable. In a typical bus network topology, the T coupler at each node splits off part of the power from the bus and carries it to the attached equipment.

Tree couplers are typically used in cascaded PON architecture. The first tree coupler is directly connected to the optical line terminal (OLT) port in the central office, then each of the output fibers is routed to a tree coupler in other sites (outside enclosure/terminal box). If there’s a need to further divide the signal, more tree couplers can be added. Of course, other amplification or compensation modules are required to ensure the transmission.

Optical couplers, optical splitter, and optical combiner are optical devices belonging to fiber optic couplers. Optical splitters are usually Y couplers, T couplers, or tree couplers that have only one input port and two or more output ports. On the contrary, optical combiners have only one output port and two or more input ports. So you can also see the numeral “1” in the descriptions of optic splitters and combiners, like 1x2 fiber optic splitters/combiners, 1x4 splitter/combiners, and 1 x 64 splitters. However, for optical couplers, they can be in any form we have mentioned above, such as star couplers, 2x2 couplers, 1x4 couplers, tree couplers, etc. Each device is designed for its purpose.