How to Choose Cables for Power Over Ethernet?

Power over Ethernet (PoE) is a technology that allows network cables to carry electrical current to power devices rather than by power cords. From late 1990’s, PoE has been widely used since it’s a reliable and cost-effective solution to provide both data and power over a single cable. Then what kind of PoE cable is suitable for your PoE devices? The following content will tell you how to choose Ethernet cables for Power over Ethernet. 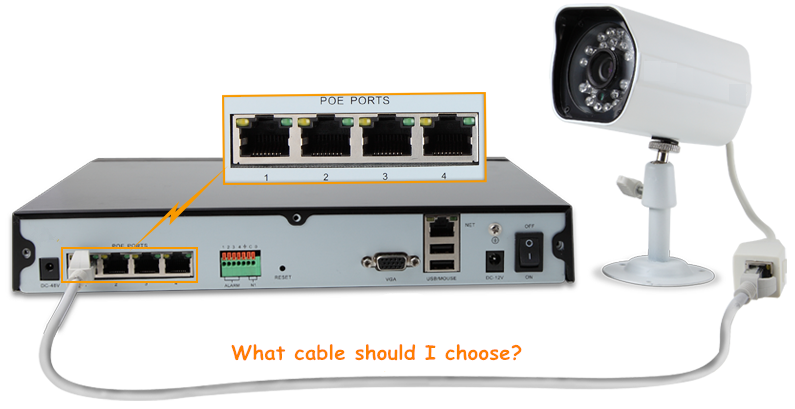 Power over Ethernet allows devices to be powered over 4-pair category cables. And the delivered power might be up to 100 watts. The IEEE standards 802.3.af and IEEE 802.3.at has ratified first two types of PoE. The power sourcing device compliant to these standards deliver the power of 15 watts and 30 watts. Usually lower power devices apply these types of PoE, such as IP telephones, wireless access points and some cameras. Later the IEEE 802.3.bt developed two new standards for higher power delivery. These two types can offer power up to 60 watts and 100 watts respectively. The new PoEs can create more heat within the cable compared to the former two kinds. If the generated heat can’t be managed well, the whole system will be damaged. As well known, not all cables are constructed to be able to safely support the high power in the installation configurations. Thus, you have to consider several factors to ensure the PoE cables suit your PoE devices.

Due to the high delivered power, close attention should be paid when picking the power over Ethernet cable. Choosing the right cable is the key to network quality and reliability. What factors should be concerned with buying cables?

Cable construction is also a factor leading the temperature rise of a cable. Copper cable can be divided into UTP (unshielded twisted pair cable) and STP (shielded twisted pair cable) cable based on cable structure. Usually, cables with metallic or foil shields are proved to dissipate more heats than UTP cables. Higher heat dissipation leads cooler cable. When using Cat6 F/UTP cable, more than 40% heat can be dissipated compared to Cat6 UTP. If allowed, choose Cat7 S/FTP cable with a foil shield around each pair which can dissipate more heats than Cat6 and Cat6 F/UTP.

The last factor is the cable installation configuration which has a large effect on the heat dissipation ability. Heat will be kept within the cable as high thermal resistance and high conductor temperature occur with large cable bundles or other installation factors. The larger the cable bundle size, the higher the temperature, no matter what cable category and construction structure.

Power over Ethernet has many applications, for example, IP camera, wireless network, etc. To some extend, whether PoE devices can operate well depend on four parameters, including cable conductor size, cable structure, cable temperature ratings, installation type. FS.COM provides PoE switch and PoE media converter for your PoE applications. For your convenience, we also offer high quality Cat5e, Cat6, Cat6a and Cat7 PoE cable with shielded or unshielded type. If you need to build PoE connections, get what you need from Fiberstore or contact us via sales@fs.com.

Where Is Ethernet Cable of Various Lengths Deployed?

Will Copper Cables Still Be an Indispensable Part in Data Center?

Your opinion matters to us. We\'ll review and use it to improve the FS website for future visits.