FS CommunityKnowledge CenterHow to Choose the Right Cat6a Cable for Your 10G Networks?

How to Choose the Right Cat6a Cable for Your 10G Networks?

The dramatic growth in data center throughput has led to the increasing usage and demand for the 10G network. Cat6a cabling solution is designed for high-performance 10GbE and above. Category 6a cable, aka Cat6a cable, is currently the preferred Ethernet cable to meet and exceed the requirements for the 10GBASE-T applications. Various Cat6a network cable types like UTP vs SFTP may confuse you, and what other factors should be taken into considerations when selecting Cat6a Ethernet cables? This article may inspire you for your Cat6a cable selection. 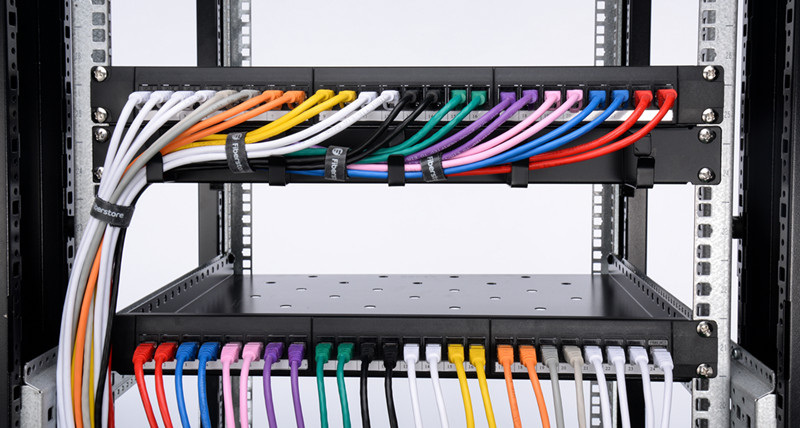 What Is Cat6a Cable?

Cat6a Ethernet cable uses four twisted cables and is typically terminated with an RJ45 connector in the patch cord. It is defined by ANSI/TIA-568-C.2, which can support 10GBASE-T up to 100 meters in channel length which ensures that it can support the fastest Ethernet applications. Cat6a extends electrical specifications to 500 MHz from 250 MHz for Cat6 cable. Backward compatible with Cat5e patch cable and Cat6 patch cable.

What Is ANEXT for Cat6a Cable?

The electrical parameter measure of Alien Crosstalk (ANEXT) helps to ensure that the Cat6a cabling system can properly run 10 Gigabit transmission, which was initially not a concern for Cat5e and Cat6 whose frequency was up to 100MHz and 250MHz respectively. However, due to operating at a higher frequency of 500MHz for Cat6a, it is important to consider the alien crosstalk effect. The amount of ANEXT depends on a number of factors, including the type of cable, cable jacket, cable length, cable twist density, the proximity of adjacent cables and connectors, and EMI (Electro Magnetic Interference). Patch panels and connecting hardware are also affected by ANEXT. Cat6a fully meets the specification for alien crosstalk reductions, granting a reliable transmission.


Cat6a Cable Types for 10GBase-T: UTP vs F/UTP vs SFTP

With features like extra internal airspace between the twisted pairs, Cat6a UTP cable can minimize crosstalk and ANEXT in 10GBASE-T networks. But the effects of ANEXT are not eliminated. Therefore, ANEXT measurement is essential for Cat6a UTP cable, which is complex and time-consuming.

Cat6a S/UTP or F/UTP cable is better than UTP cable to some degree. The foil shield acts as a barrier reflecting the noise from machinery, lights, motors, and other sources of EMI and RFI. And the foil shield also can protect the data signals from leaking out of the copper cable. In addition, Cat6a F/UTP cable does a much better job of eliminating ANEXT than Cat6a UTP, providing significantly more headroom for 10GbE over copper.

Compared with Cat6a UTP and F/UTP cable, Cat6a SFTP patch cable provides the maximum level of protection from interference and is found in the highest performance cables. With the double shield, the Cat6a SFTP cable allows for the fastest and stable transmission for 10GBASE-T networks. Furthermore, the additional foil on individual pairs can limit the amount of crosstalk and ANEXT effectively. Cat6a SFTP patch cable is currently prevalent in various verticals like government, healthcare, and education.

After knowing how to choose from Cat6a UTP vs F/UTP vs SFTP cables, some other parameters of Cat6a cables also affect the performance. Here are several key considerations to weigh when choosing the right Cat6a cable.

Cat6a cable operates at frequencies up to 500 MHz—twice that of Cat6. Controlling noise and crosstalk at higher frequencies, the Cat6a cable is up to 50% larger than its Cat6 predecessor. A larger size means fewer cables can fit into a cable tray or conduit, which is a big concern in retrofit installations. While many available Cat6a options remain significantly larger and heavier, some of the latest Cat6a cables are only about 15% larger than Cat6.

Larger cable diameters of Cat6a cables mean a larger bend radius, which is important when routing cables in tight spaces such as inside wall cavities. The bend radius also affects the ability to route cables for maximum airflow within racks. The smaller the bend radius, the easier the cable is to route and install.

Most Cat6a Ethernet cables are larger because they have more and thicker materials. More twists in the copper pairs, larger splines separating the pairs, and thicker outer jackets. All of these lead to a longer time to prepare and terminate Cat6a cables. Normally, thinner cables take less time to install.

There is a perception that shielded cable provides better noise immunity, but the effectiveness of the shield depends on the quality and reliability of the shield termination, balance of the twisted pairs, and quality of the local and remote ground connection. The impedance of the ground connection can increase higher frequencies and differences in ground potential can couple noise into the conductors. Cable designs that effectively surround the conductors with a Faraday cage can provide an electromagnetic barrier without the potential drawbacks of grounding.

When selecting the proper cable for your business, you also need to take the overall network infrastructure into consideration, like whether your business owns or rents the building. Things like the primary usage or your 10G network, the potential infrastructural changes, etc. are also should be taken into account.

Before deciding on the best Cat6a cable, all factors need to be weighed up so that the Cat6a Ethernet cable you buy is future-proofing for your 10GBASE-T networks. Cat6a UTP, S/UTP, F/UTP, and SFTP cables are all available for 10GBASE-T. SFTP Cat6a patch cable with better performance shows more advantages in the 10GBASE-T network deployments.