What is the Distribution Layer? 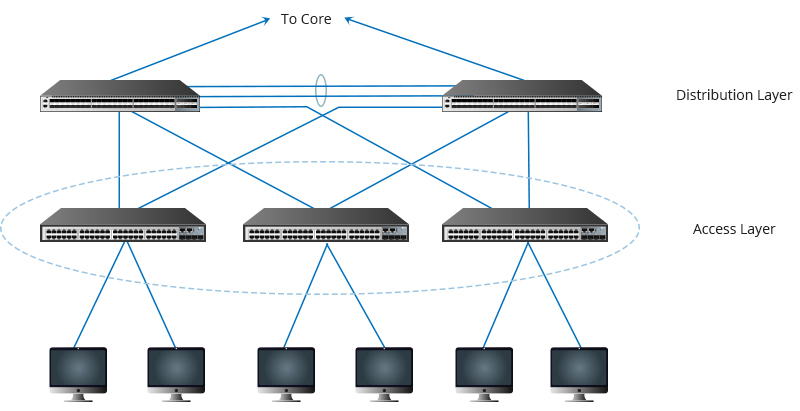 What is Distribution Switch?

The switch working in the distribution layer is called distribution switch which receives traffic from the access layer and forwarding it to the core layer, determining the workgroup access as well as providing policy-based connectivity.

However, aggregation switch is not a must-have in every situation, and access switches can be connected directly to the core switch without passing through the aggregation switch, especially when there is a short transmission distance, and the core layer has enough access ports to connect directly to the access layer. In this condition, one can save the overheads, relieve the maintenance burden, and network conditions are also easier to monitor.

What does a Distribution Switch Do?

A distribution switch aggregates the traffic from the access layer, and forward and switch the data packets. A distribution switch handles local routing, filtering, traffic balancing, QoS priority management, and security mechanisms, IP address conversion, traffic shaping, and multicast management based on the user traffic of the access layer, according to which then forward user traffic to the core switching layer or route locally. It also complete the conversion of various protocols (such as aggregation and redistribution of routes, etc.) to ensure that the core layer connects areas running different protocols.

With the general factors such as port type, port density and port speed considered, the following section will focus on the switch forwarding rate and functions that the distribution layer requires. Here are the factors for reference.

It is always the responsibility of distribution switches to process Layer 3 data. The traffic generated from the access layer devices needs to be segmented into VLANs, requiring the upper-class switches to provide inter-VLAN routing functions so as to enable the multiple VLANs to communicate with each other. Since the core layer has a heavy task to handle the forwarding of the extremely high volumes of traffic, distribution switches with Layer 3 functionality are deployed to ease the workload of the core switches.

Security policy needs to be employed on the distribution layer switches to prevent promiscuous traffic through the network and allow others to go through. With the use of security policies such as access control list (ACL), the distribution switches can identify which types of traffic are permitted to communicate and which does not match the ACL rules defined on the switch ensuring the security of the whole enterprise network.

Setting up an intelligent QoS is essential for effective network capacity. As so many users sending traffic of various types within the LAN, deploying distribution switches with QoS features will read packets and prioritize delivery based on the policies so as to enable the important traffic to go first. It will ensure the audio and video data communicate in an adequate bandwidth.

To sum up, the distribution layer is the second layer of the Cisco three-layer hierarchical model. The switch working at this layer is called distribution switch which receives traffic from the access layer and forwarding it to the core layer, determining the work group access as well as providing policy-based connectivity. To choose the right distribution switch, there are several factors to consider, such as port type, port density and port speed, layer 3 function, forwarding rate, redundancy, link aggregation, security policy, QoS capacity etc,.