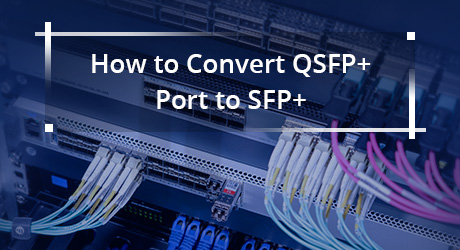 How to Convert a Port From QSFP+ to SFP+ Port?

As the arrival of 40G Ethernet, many enterprise users have to think about how to migrate their network to a 40G network with full use of the current 10G network infrastructure. Specifically, when new 40G switches with QSFP+ ports are added in, how to directly connect them with your existing 10GbE devices (like switches and servers) with SFP+ ports is the top thing you need to consider. In this post, three widely used migration solutions to directly convert a port from QSFP+ to SFP+ will be shared for your references.

In addition, there is another type of 40G AOC breakout cable - QSFP+ to 4 duplex LC cable. It has an QSFP+ transceiver pre-terminated on one end but LC duplex connectors at the other end, which requires additional SFP+ transceivers when used.

No matter what type you choose, all these QSFP+ breakout cables can split a 40G connectivity into 4x10G channels, while you connect them with a QSFP+ switch on the one end and several 10G devices (up to four) containing SFP+ ports on the other end.

The second way to convert QSFP+ to SFP+ port is using MTP/MPO to LC breakout cable. This solution is similar to the prior solution but without the transceiver pre-terminated on each end. With an MTP/MPO connector on one side, MPO/MTP 8-fiber assembly is often equipped with four LC duplex connectors on the other side. To realize the conversion from 40G to 10G using MTP/MPO to LC breakout cable, you need to add one QSFP+ transceiver with MTP/MPO interface and four SFP+ modules with duplex LC interfaces. As the figure shown below, you just need to plug the cables into the matching 10G or 40G transceivers and then insert these transceivers into QSFP+ port or SFP+ ports.

QSFP+ to SFP+ Port: How to Make Your Choice?

Up to now, we have explored three direct ways to convert a port from QSFP+ to SFP+ port. However, in data centers or other high-density cablings, network migration is a complex process. Sometimes, inter-connect connectivity also needs to be used. How to make your selection about those methods? you can take the following factors into considerations.

To migrate a QSFP+ port to SFP+ port, the transmission distance should be the prior thing to be checked.

As for short-Reach Distance: QSFP+ to 4xSFP+ AOC/DAC cable is suggested. If comparing AOC breakout cable with DAC breakout cable, DAC with copper cable design offers shorter transmission distance within several meters while AOC with fiber optics can be longer. Thus DAC is often used for connections within a rack or between two close racks.

As for long-distance transmission, QSFP+ to 4xSFP+ AOC/DAC cable is limited in shorter distance compared with the other two types. You can select a combination use of 40G MTP/MPO trunk cables and 8-fiber cable assemblies like the figure below shows.

In a high-density network, there could be hundreds or thousands of QSFP+ ports and SFP+ ports needed to realize 40G-to-10G connectivity. Cable assemblies like QSFP+ breakout cable with pre-terminated transceivers will be more suitable than QSFP+ to SFP+ QSA adapter and other inter-connect methods in saving space and simplifying the network maintenance.

Last but not least, the whole cost is one of the most crucial factors for choosing a way to convert QSFP+ to SFP+ port. You need to take all the above factors together to pick the most cost-effective solution. For example, if your 40G-to-10G connections are taken in a short-distance within 7 meters, the 40G QSFP+ to 4x10G SFP+ DAC cables, with pre-terminated QSFP+ module and four SFP+ modules will be the most economical solution than any other combinations.