How to Solve the Common Problems in OTDR Testing

How to Solve the Common Problems in OTDR Testing

OTDR (Optical Time Domain Reflectometer) is widely used in all phases of a fiber system's life, from construction to maintenance to fault locating and restoration. However, even a trained and experienced OTDR operator may have difficulty interpreting a fiber trace at times. There are a few cases where it is almost impossible to get an exact distance or loss determination based on one measurement. In some extraordinary circumstances it may be necessary to test a fiber with different set-up conditions or from both ends in order to get meaningful results.

When a fiber gets cut or broken the end may shatter so that the light hitting the end may not reflect at all. Also, the end of the fiber may become immersed in oil or grease, which may also eliminate the Fresnel reflection. When this happens, the trace will suddenly fall off into the noise level. There may be a rounding-off of the backscatter where it falls off so that it may be difficult to judge where the fall-off point is. The best method to determine the break point is to use a 2-Point loss method to determine at which point the backscatter level drops off by 0.5dB. Place the left cursor as near to the end as possible but still on the backscatter. Then move the right cursor in towards the left cursor until the loss between the two reads 0.5dB. The actual end of the fiber should be very close to the point measured by the right cursor. To increase your confidence in this location, take the OTDR to the other end of the fiber and test back to the break from the other side. It is possible that the other side of the break will reflect some light. (Keep in mind that the fiber could be broken at more than one point.) 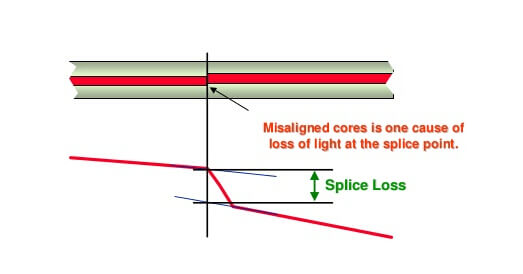 Sometimes when two fibers are spliced together, the backscatter level at the splice point shifts up instead of down. At first glance this would appear to be a "gain" in power at the splice. The OTDR may even indicate a negative splice loss. What has happened is that the two fibers were mismatched: the second fiber has a higher backscattering coefficient than the first, and more light gets scattered back by it. The OTDR sensor reads this as a higher level than the end of the first fiber and plots the corresponding data points higher up on the screen. If the same splice is tested from the opposite direction, the OTDR would indicate a higher "normal" loss than the amount of the "negative" loss. In this case, the true splice loss value is the average of the two readings. That is, if the "gainer" reads -0.25 dB, and the opposite direction reads 0.45 dB, then the actual splice loss is 0.1 dB.

Figure 2 shows what a "gain" splice looks like on an OTDR display in comparison to what a "normal" splice looks like. Note that the slopes of the two fiber traces are different. The second fiber has a steeper slope than the first fiber, which indicates a higher backscatter level throughout the fiber. It would normally appear higher on the screen than the first fiber because it returns more light to the OTDR. A difference in Index of Refraction can produce different backscatter levels, and thus different slopes of the trace. The other possible cause of a gain is that the "mode field diameter" (which is related to the fiber's core size) is different in the two fibers, which causes more backscattering to come back from the second fiber. 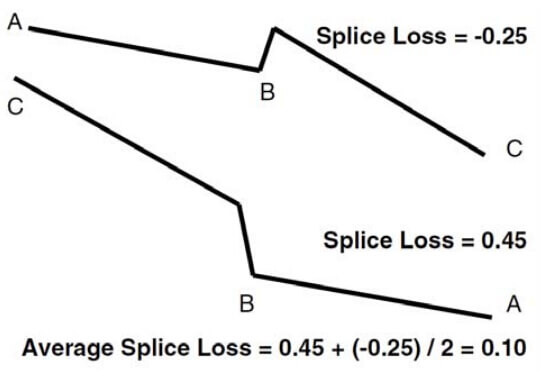 When a gain splice occurs, it is because the two fibers being spliced together are mismatched in some way. This phenomena is most apparent when you splice fibers made by two different fiber manufacturers. Because of the inherent difference in optical characteristics between any two fiber manufacturers you can expect the two fibers to be mismatched, thereby producing "gainers."

The average of all splices in a fiber span [a span is one or more fibers spliced together to make a continuous fiber link from one connector end to the other] is usually the benchmark used in constructing a system. If the average is equal to or better than the goal, then the overall loss budget planned for will be met. Gain splices can be confusing in determining splice loss averages since they usually are displayed as a negative loss on the OTDR. In order to determine the average splice loss value for a string of splices in a fiber span, you need to include the gain splice values along with the normal loss values. That is, use BOTH the positive and negative values as displayed by the OTDR in summing the total of all splice loss values. Then divide by the number of splices summed.

The most accurate method of determining the average splice loss values in a fiber span is to make a bi-directional measurement of each splice—that is, measure the splice of Fiber AB to Fiber BC first from the Fiber A end, then from the Fiber C end—individually average each splice loss, then take the average of the entire span. This method is time consuming and can usually only be done after the entire system has been spliced. The next best method is to take the one-directional average of all splices in a span using the splice values measured from the same direction only. Normally, when a gain occurs, the next splice will be a higher-thannormal loss. This is because the fiber with the higher backscatter level causing the gain will also cause a higher measured loss going to the next fiber, and the effects of the two splice measurements will cancel out. Avoid calculating splice loss averages using one-directional splice loss values when the individual splice values along the span were measured from different directions.

Sometimes you will see a Fresnel reflection where you don't expect one—usually after the end of a fiber. This usually happens when a large reflection occurs in a short fiber. The reflected light actually bounces back and forth within the fiber, causing one or more false reflections to show up at multiple distances from the initial large (true) reflection. That is, if a large reflection occurs at 1,325 feet, and there is an unexpected reflection at 2,650 feet (twice the distance to the first) and another at 3,975 feet (three times the distance to the first), then it is likely the 2nd and 3rd reflections are "ghosts." (Figure 3)

Another type of ghosting happens when you set the range shorter than the actual length of the fiber (in order to see details up close in a very long fiber). This allows the OTDR to send additional pulses of light into the fiber before all of the backscatter and reflections from the first pulse have cleared the whole fiber. When you get more than one pulse in the fiber at one time, you set up a condition where returned light from different pulses arrive at the OTDR at the same time, producing "unpredictable results." Often this will take the form of a series of reflections, or excessive noise, occurring in one area of the fiber.

Here are a few "ghost-busting" techniques you can use to determine if ghosts are occurring and then possibly eliminate them:

1. Measure the distance to the suspect reflection. Then place a cursor half this distance on the fiber. If an expected reflection is at the half-way mark, then the suspect is probably a ghost.

4. If a ghost seems to occur in the fiber, then measure the loss across the suspected reflection. A ghost will show no loss across it when you do a splice loss measurement.