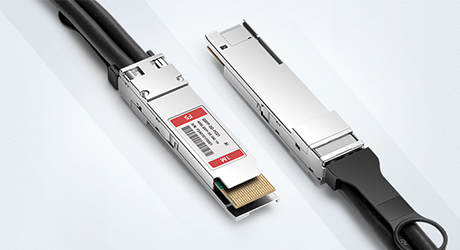 How Much Do You Know About QSFP56?

Over the past years, there have emerged various optical module form factor types with the growth of new technology and high-speed interconnects, among which QSFP56, as a member of the QSFP family, is a solution for 200G applications. What‘s the difference between QSFP56 with other QSFP family form factors? Is QSFP56 the same as QSFP56-DD? If you are wondering about these questions, this article is for you.

To make clear what QSFP56 is, let’s take a look at the QSFP form factor first. Quad Small Form-Factor Pluggable (QSFP) was developed after SFP, which was originally designed to replace the single-channel SFPs with high-density optical modules. Due to the fact that it denotes four lanes for up to 4 wavelengths, it provides higher bandwidth capacity compared with the SFP modules.

Developed on the basis of QSFP, 40G QSFP+ arose and then 100G QSFP28 came into use for high-density applications. With the rising of data traffic in data centers and advanced network applications, the market is urgent to achieve higher-speed general availability. There is more addition to QSFP family form factors, such as 200G QSFP56 and 400G QSFP56-DD.

As an evolution of the previous 40G QSFP+ and 100G QSFP28, Quad 50 Gigabits Small Form-factor Pluggable (QSFP56) is the one designed for 200G Ethernet. QSFP56 denotes 4 x 50 to 56Gb/s in a QSFP form factor. Sometimes it can also be referred to as 200G QSFP for sake of simplicity. QSFP56 optical modules are similar to QSFP ones in terms of size and form factor. Classified by distance, QSFP56 modules can be divided into QSFP56 CR, SR, DR, FR, LR, which enables different transmission distances over a single mode fiber (SMF) or multimode fiber (MMF).

Seen from their industry names, QSFP56, QSFP28 and QSFP+ are very similar in that they share the same QSFP form factor as their postfix shows, and they have the same size as each other. However, their data center and connectivity capabilities are different. Below is a table listing the basic parameters of QSFP56, QSFP28, and QSFP+.

From the comparison chart, it can be distinctly seen that compared with QSFP+ and QSFP28, the QSFP56 form factor performs a higher network speed as 200G QSFP supporting 4×50G channels. While QSFP+ is an evolution of QSFP to support 4×10G channels carrying 10G Ethernet, 10G fiber channel or QDR InfiniBand. It introduced the concept of multiplexing four lanes to increase the bandwidth, capable of handling 40Gbps line rates at 10GBaud NRZ per lane. QSFP28 supports 4×25G channels and contains 4-lane optical transmitter and 4-lane optical receiver as QSFP+ does.

The most significant change from QSFP+ and QSFP28 to QSFP56 is that QSFP56 made the change from NRZ encoding to PAM4 encoding. Though QSFP56 still uses 4 lanes as QSFP28, the modulation is doubled to 50G per channel, which enables more data on existing fiber, accordingly, more suitable for hyper-scale data center networks.

Though QSFP56-DD has the double density, its size is similar to QSFP56. 400G QSFP56-DD port is backward compatible with the QSFP transceiver which means as long as the switch supports, QSFP56 can work on the QSFP56-DD port. When using a QSFP56 module in an QSFP56-DD port, this port will be configured for a data rate of 200G, instead of 400G.

The QSFP56-DD form factor is now recognized by the 400G market as the 400G form factor that gets the most concern. Despite that nowadays 400G Ethernet is seen as a futureproofing solution for the next-generation data center, there is still a need for 200G QSFP56 for some organizations deploying 200G Ethernet.