FS CommunityKnowledge CenterWhat Is iSCSI Storage and How to Build an iSCSI SAN?

What Is iSCSI Storage and How to Build an iSCSI SAN?

Now massive data has been generated every day which needs to be safely stored and economically managed so as to be available to users when required. Thus there appear various network storage systems such as Network Attached Storage (NAS), Internet Small Computer System Interface (iSCSI), etc. Among them, iSCSI storage is a favored new technology that provides high-speed, low-cost, and long-distance storage solutions. Here will introduce what is iSCSI storage and give tips on how to build an iSCSI SAN.

What Is iSCSI Storage?

iSCSI is a storage area networking protocol that defines how data is transferred between host systems and storage devices. It enables block-level SCSI data transport between the iSCSI initiator and the storage target over TCP/IP networks. iSCSI storage is also known as iSCSI SAN storage, which is a cost-effective alternative to traditional Fibre Channel (FC) SAN. Unlike FC SAN which requires dedicated hardware (FC HBA, FC switch, etc.), iSCSI SAN storage can be built on existing network infrastructure (fiber switch, router, etc.), rather than requiring us to buy additional hardware. Furthermore, iSCSI is based on block transfer standard, which is more fast and efficient. 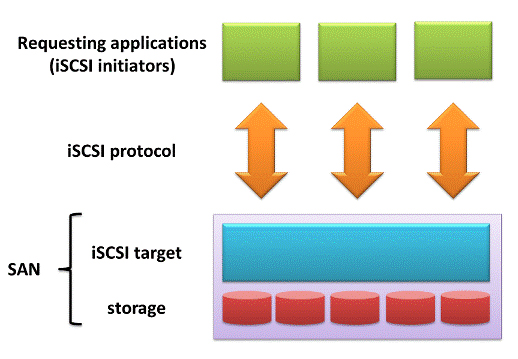 How Does iSCSI Storage Work?

To better understand how iSCSI works, some vital iSCSI components such as iSCSI initiator and iSCSI target should be the first to learn. iSCSI initiator is a piece of software or hardware that is installed in a server to send requests to and receive responses from an iSCSI target. iSCSI target is on storage devices providing the storage, which listens and responds to commands from iSCSI initiators.

As shown below, iSCSI storage works by transporting block-level data between iSCSI initiator on a server and iSCSI target on a storage device through the TCP/IP network. The iSCSI protocol encapsulates SCSI commands and assembles the data in packets for the TCP/IP layer. Packets are sent over the network using a point-to-point connection. Upon arrival, the iSCSI protocol disassembles the packets, separating the SCSI commands so the operating system will see the storage as if it was a locally connected SCSI device that can be formatted as usual. 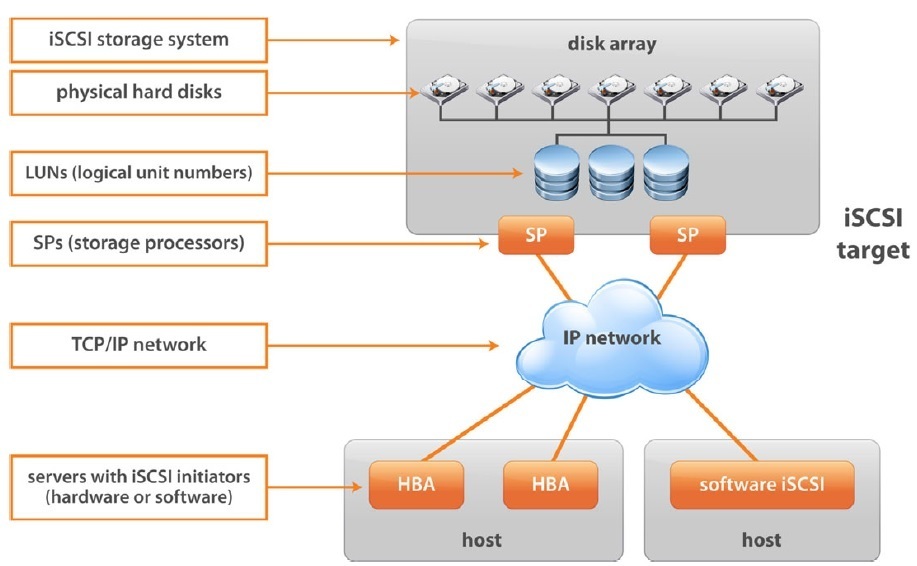 Why Use iSCSI Storage?

Except for the above mentioned iSCSI benefits such as cost-saving and high performance, there are some other iSCSI advantages and disadvantages:

Fibre Channel (FC) and iSCSI are two key SAN-related technologies and these two technologies solve the same technical problem of networking block storage while have been positioned as fierce competitors. People often ask Fibre Channel SAN vs iSCSI SAN: Which is better for SAN? This comparison of Fibre Channel vs iSCSI will help you make your decision:

This part aims to help system administrators decide between the two storage technologies NAS and iSCSI. Both NAS and iSCSI were developed to help cover the exponentially increasing need for storage capacity by means of external, scalable storage devices that can be networked if necessary. The main difference between iSCSI vs NAS is that iSCSI is a data transport protocol while NAS is a common way of connecting storage into a shared user network.

How to Build an iSCSI SAN?

iSCSI SAN is suitable for small/medium-sized businesses that have large amounts of data to store and transmit over the network. Here gives some tips on how to set up and configure iSCSI SAN for enterprise network:

First, though iSCSI storage network can run on existing network infrastructure, it is better to place iSCSI traffic on its own VLAN, preferably on a completely separate, gigabit-speed network. This helps to make a redundancy connection for storage data in case of network failure.

Lastly, if your servers have single-Gigabit connections to an Ethernet switch for access to disk arrays, they are vulnerable to failure on that link. The best way is to use Multipath I/O (MPIO) technique to create multiple connections from each server's iSCSI initiator to your disk array.

To conclude, iSCSI storage can leverage enterprise’s network infrastructure investments by using standard Ethernet switches and routers to move the data from server to storage. It also enables IP infrastructure to be used for expanding access to SAN storage and extending SAN connectivity across any distance. So organizations requiring data storage security or disaster recovery will benefit a lot from iSCSI SAN.