LACP vs PAGP: What’s the Difference?

In order to create maximum availability and stability for networks, link redundancy or redundant links are emphasized by enterprises and data centers when deploying networks. Etherchannel technology is the most effective way to achieve network redundancy by providing automatic recovery for the loss of a link. When configuring Etherchannel across network devices such as switches or routers, the two most widely used negotiation protocols are LACP (Link Aggregation Control Protocol) and PAGP (Port Aggregation Protocol). How they differ from each other when aggregating links and redistributing the load in case of a link fail for any network? This post will give a detailed comparison over LACP vs PAGP. 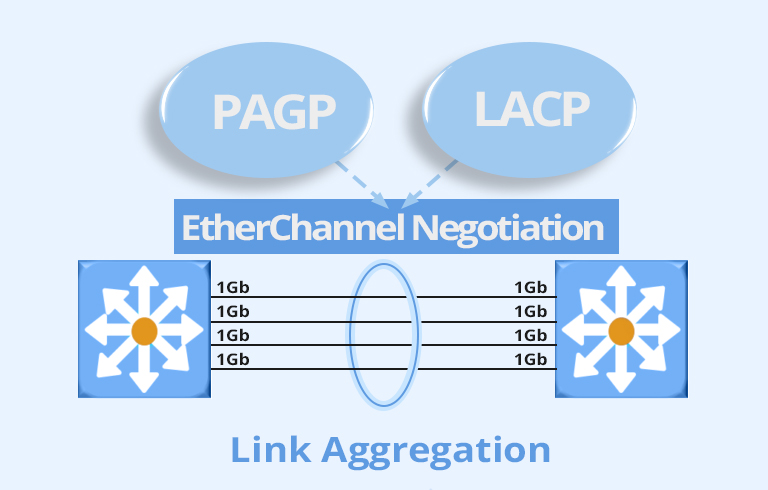 What Is LACP Protocol?

LACP is a data link layer protocol defined in IEEE 802.3ad standard. It provides a method to control the bundling of several physical ports together to form a single logical channel. It enables a network device, typically a data switch, to negotiate an automatic bundling of links by sending LACP packets to the peer. In practice, LACP protocol serves the general principle of link aggregation, which describes the effort of setting up parallel network structures to provide redundancy, or to improve performance. FS S3800 series Gigabit Ethernet switches can support LACP protocol. However, they don't support entering the aggregation port to configure various parameters. They must be configured through the interface range command.

How LACP works? When LACP configuration is enabled, a local LAG cannot transmit packets unless a LAG with LACP is also configured on the remote end of the link. If LACP configuration is not enabled, a local LAG might attempt to transmit packets to a remote single interface, which may cause the communication to fail. LACP works in conjunction with MLAG (Multi-chassis Link Aggregation). LACP protocol is typically used to negotiate north and south (between host and an MLAG virtual switch or between MLAG virtual switches). The video below demonstrates how to verify MLAG configuration and view LACP ports configuration on FS S5800-8TF12S 10 Gigabit switch and S3800-24T4S Gigabit switch.

What Is PAGP Protocol?

PAGP is a Cisco-proprietary protocol that can be run only on Cisco switches or on switches licensed by vendors to support PAGP. PAGP facilitates the automatic creation of Etherchannel by exchanging PAGP packets between Ethernet ports. PAGP packets are exchanged between switches over Etherchannel capable ports. Ports that have the same neighbor device ID and port group capability are bundled together as bidirectional, point to point Etherchannel link.

By using PAGP, the switch learns the identity of its partners capable of supporting PAGP and then dynamically groups similarly configured ports into a single logical link (channel or aggregate port). As illustrated below, PAGP is utilized to run across the Cisco Virtual Switching System (VSS), which is comprised of two physical Catalyst 6500 series switches acting as a single logical switch. In the VSS, one switch is selected as the active switch, while the other is selected as the standby switch. Both of the active and the standby switch are linked with the access switches via PAGP. In this case, if the Etherchannel between the two Catalyst 6500 switches failed, the VSS can still communicate with the access switches via PAGP negotiation. LACP vs PAGP: How They Differ From Each Other?

Both LACP and PAGP protocols are used for link aggregation. They are aimed at bundling the links and balancing traffic across the member links to provide aggregated throughput. PAGP provides the same negotiation benefits as LACP. Both LACP and PAGP packets are exchanged between switches over Etherchannel capable ports. The most significant difference is the vendors supported for them. LACP is open standard and supported by most of vendors, while PAGP is Cisco proprietary only used between Cisco devices. Besides, LACP can support cross-stack, while PAGP does not since it does not support participating interfaces on different physical switches. Thus if you need to form the Etherchannel on stack switch, it is better to choose LACP instead of PAGP.

LACP and PAGP protocols are similar but they differ in configuration mode and aggregating mechanism. How to choose between LACP vs PAGP. You would have to figure out the protocol supported for your device interface. Each interface on your network device should have the appropriate protocol identified (PAGP or LACP), and be configured whether negotiation should occur. Since LACP is IEEE based protocol, it is more often used to bundle the links to get maximum throughput between the wiring closets and the data centers. However, PAGP is also in demand when Cisco equipment is embedded in your network and your network architecture can support PAGP negotiation.