Media Converter vs Ethernet Extender: How to Choose?

Media Converter vs Ethernet Extender: Which to Choose?

Their performances are quite different. Media converter usually performs the function of photoelectric conversion. In copper-to-fiber connections, a pair of media converters are used to convert electrical signals to optical ones and vice versa. In fiber-to-fiber connections, media converters bridge multimode to single-mode fiber, dual fiber to single fiber or achieve wavelength conversion. While Ethernet extender converts Ethernet to DSL and reverts signals back to electrical format across coax cabling, T1/E1 and copper cabling. And their transmission efficiency largely depends on the physical media used. Thus, media converters can support 10/100/1000Mbps or even 10Gbps, reaching longer transmission distance up to 160 km. While extender usually supports Ethernet speeds of 10/100/1000Mbps, allowing 10/100Base-TX Ethernet data with SHDSL technology to be transmitted up to 20 km or extending 10/100/1000Base-T Ethernet up to 3 km using VDSL technology.

When to Use Media Converter or Ethernet Extender?

Media converters are commonly used in all sorts of industries and sectors to provide a connection between fiber and copper, such as enterprises, campus and Metro Ethernet. The figure below illustrates a typical application case of fiber optic media converter - it is used to connect telecommunication room switch to workstations located beyond 100m in a large facility. The Ethernet switch is connected to the media converters on the chassis via copper cable. Each end device, such as a workstation, is also linked to the media converter for converting UTP signal to optical signal, which is then sent back to the computer room.

There are also cases when you have to use original facilities to extend your LAN. If there is an existing twisted-pair copper or telephone wire running, then using a pair of Ethernet extenders can be the best fit. Extenders will work with all sorts of copper wire already in place, significantly cutting down the labor and cabling involved in a network installation. As shown in the following picture, the Ethernet extenders are deployed to connect the main office to Manufacturing Plant A, B, C respectively by converting Ethernet to UTP, so as to extend transmission distances. 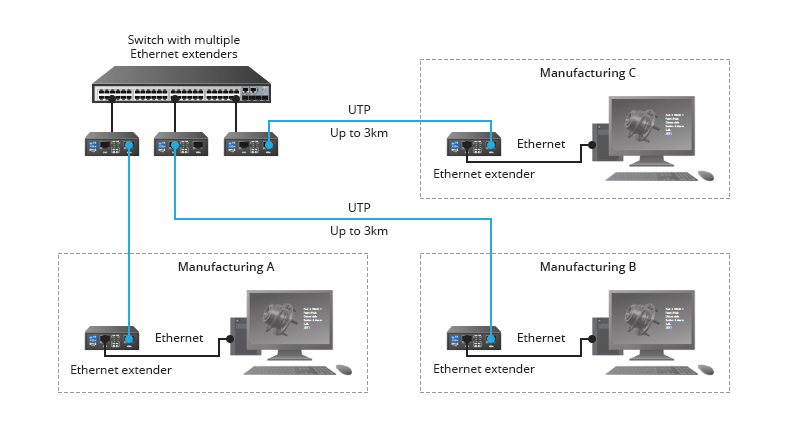