FS CommunityKnowledge CenterMLAG vs. Stacking: What Is Your Option?

MLAG vs. Stacking: What Is Your Option?

MLAG vs. stacking is something that has been thrown around many times – both of them are valid options to bond separate switches and manage them as a single logic switch, MLAG and stacking significantly improve network efficiency while simplify system management. So what makes the differences? When should we choose MLAG instead of switch stacking? We try to clear out some confusions by comparing MLAG vs. stacking features, pros and cons, then analyzing how to make a proper decision over MLAG vs. stacking.

Let’s start with the basics of MLAG and stacking. Short for Multi-Chassis Link Aggregation, MLAG is the ability of two or more switches to act like a single switch when forming link bundles. This allows a host to uplink to two switches for physical diversity, while only have a single bundle interface to manage. Also, two switches could connect to two other switches using MLAG, with all links forwarding. Most MLAG implementation are totally proprietary, that means you are not able to create an MLAG between different vendors. The video below shows how to configure MLAG on FS S5800-8TF12S hyper converged infrastructure switches. (Note: FS has discontinued S3800 series switch. As per our policy, customers will continue to get support from FS technical assistance team, and the valid warranty provided is maintained on the product. For customers who are interested in FS S3800 series switch, you can choose S3900 series switches.)

Stacking, however, is usually something you may expect at the edge rather than the core of the network. It allows you to manage multiple switches as a single entity, which can be achieved by linking switch backplane or connecting uplink ports at the front. Likewise, stacking is supposed to happen between Ethernet switches in the same product line of the vendor. 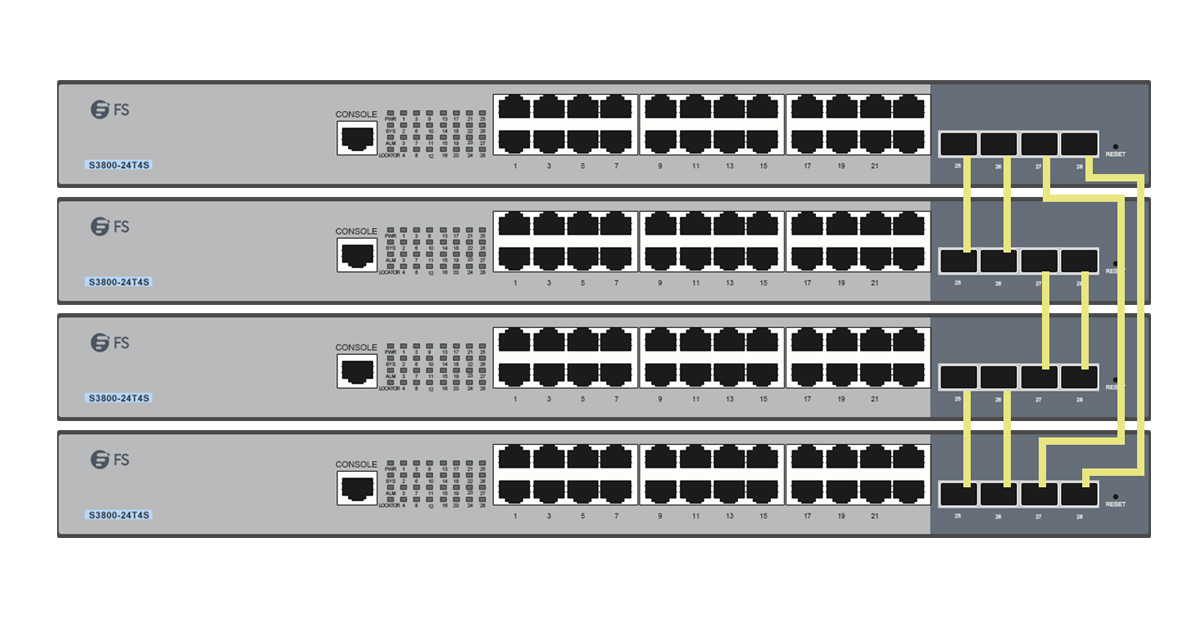 MLAG vs. Stacking: Pros and Cons

Here we take a review of some of the pros and cons of MLAG and stacking, helping you to understand the benefits and limitations of each technology.

For MLAG, traffic is more evenly distributed to each of the switches through the use of LAG hashing. And each switch is independently able for forward / route traffic without passing to a master switch.
MLAG can simply bundle more links into the LAGs to increase bandwidth for North & South as well as East & West.
MLAG offers more stability over stacking since it has dual management and control planes.
MLAG is more suitable for switches that are geographically separate. However, when stacking remotely separated switches, the exponential of error increasing with distance.
MLAG is able to upgrade one switch at a time without affecting service. Besides, it could expands port capacity beyond the limitation that you could with stacking - simply adding another switch East or West by creating another MLAG to another switch.

MLAG is more complex to configure.
You have to configure/maintain each switch individually when using MLAG.
Current MLAG doesn't support spanning-tree.

Stacking is much simpler and easier to configure and manage.
Possibly easier to add more ports by adding an additional switch to the stack.
Makes sense to be used at the edge of smaller sites where the control plane services are not required for the full functioning of the network.

Limited to number of switches that can be added to the stack or bond. Not able to add more bandwidth to stacking (but you can for bonding).
Single control and management plane.
More inter-switch communication, as opposed to the ISC for MLAG.

MLAG vs. Stacking: Which to Choose?

MLAG is useful to present diverse physical paths to hosts, and it also allows you to do software upgrade of the core. It can be an efficient tool to eliminate blocked Layer 2 links due to spanning-tree. MLAG can be used at various places in the network to eliminate bottlenecks and provide resiliency – at the leaf layer it offers active/active redundant connections from the server to the switches. While at the spine layer, it greatly enhances the Layer 2 scalability without increasing the cost. So if you need redundant Layer 2 connections and access to large portions of bandwidth, or your application servers require multi-path fabric architectures, MLAG would be a better design.

Stacking is a great fit for limited space deployment where flexibility trumps availability. As a pay-as-you-grow model, switch stacking is attractive for users that need flexibility in their physical network. However, the connecting distance is limited by the length of stacking cable – often within wiring closet. So if you have a small site that configuration simplicity is a matter, and bandwidth distribution to switches less of a concern, or your switches are in close proximity of each other, stacking could be your choice.

FS.com offers a large portfolio of network switches with various port design and feature sets, including 10GbE switch, 25GbE switch, 40GbE switch and 100GbE switch. Some of them also have the function of MLAG and stacking. The following diagram presents several options for you.

FS.com has two types of 24 port switch which are designed specifically for stacking, the details of each are presented as following.

Data center and high performance cloud computing networks require both the highest level of network bandwidth and reliability. MLAG and stacking are both decent methods to achieve these goals. So the decision to use one or the other is simply a matter of weighing up the options and understanding your network requirement. FS.com network switch and Gigabit PoE switch provide customers with better network efficiency and business value. If you need any help, feel free to reach out via sales@fs.com.