MLAG vs. vPC: What's the Difference?

The wider adoption of data center virtualization to streamline data flows keeps driving the demand for higher bandwidth and faster speeds. To cater to this trend, network engineers are seeking ways to connect as many networking devices as possible. One of them is the link aggregation group (LAG) which can combine multiple Ethernet links into a single logical link and improves data transmission efficiency. Both MLAG and vPC can be used to create LAG, but what are they and how do they differ from each other? Let's explore.

MLAG (Multi-chassis Link Aggregation) is a non-standard protocol that enables Layer 2 multipathing from the host to gain either additional bandwidth or link resiliency. It’s a public protocol so that every vendor can support MLAG by using their own custom rolled implementation of it. Like Stacking, MLAG can make two or more switches act like a single switch when forming link bundles. It allows a host to uplink to two switches for physical diversity, while still having only one single bundle interface to manage. These two switches can connect to two other switches using MLAG, with all links forwarding. Watch the following video to learn how to configure MLAG on FS S5800-8TF12S hyper-converged infrastructure switches.

In MLAG links, Link Aggregation Control Protocol (LACP, 802.3ad) is typically used to negotiate north and south between host and an MLAG virtual switch or between two MLAG virtual switches. East and west proprietary protocols are used between switches that are members of the same MLAG virtual switch. Figure 1 shows the example of using multiple FS S5850-48T4Q gigabit ethernet switches to form an MLAG Pair. With four leaf switches in an MLAG pair, you can build redundant connections from the server to the switches. The LAG groups can be formed using static link aggregation or LACP based negotiation methods. 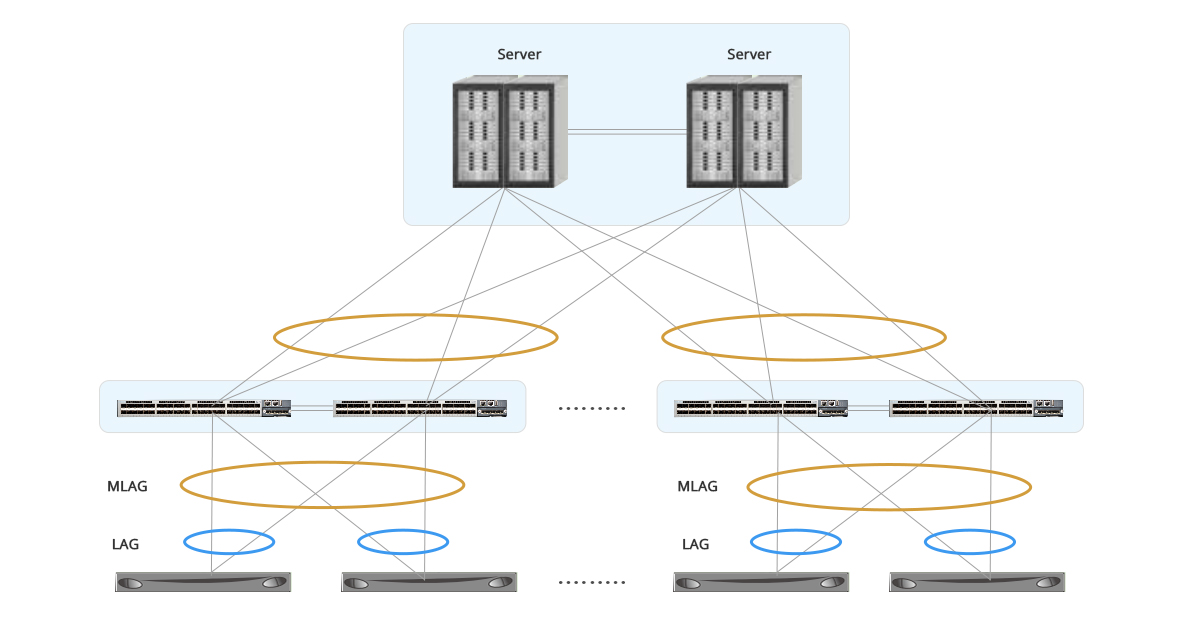 After understanding the working principle of MLAG, we can clearly know its advantages in use.

vPC, short for Virtual Port Channel, is a Cisco Nexus technology where a Port Channel is a regular LAG. (A Port Channel is a technology that provides a way to aggregate (bond) multiple interfaces together. Traffic is then loadbalanced across each of the connections.) It is a Cisco Nexus specific protocol that is hard to configure on any other type of switch. Of course, there are indeed vPC-enabled switches offered by other vendors except Cisco, but not too much.

vPCs allow links physically connected with two different Cisco switches to appear as a single Port Channel to a third device. The third device can be a switch, a server, or any other networking device supporting IEEE 802.3ad Port Channels. vPC also allows the creation of Layer 2 Port Channels that span two switches.

As illustrated below, vPC is utilized to create inter-switch links spanning two switches while keeping two control planes of these switches separate. After you enable the vPC function, you create a peer keep-alive link, which sends heartbeat messages between the two vPC peer devices. The vPC domain includes vPC peer devices, the vPC peer keep-alive link, the vPC peer link, and all the Port Channels in the vPC domain connected to the downstream device. You can have only one vPC domain ID on each device. 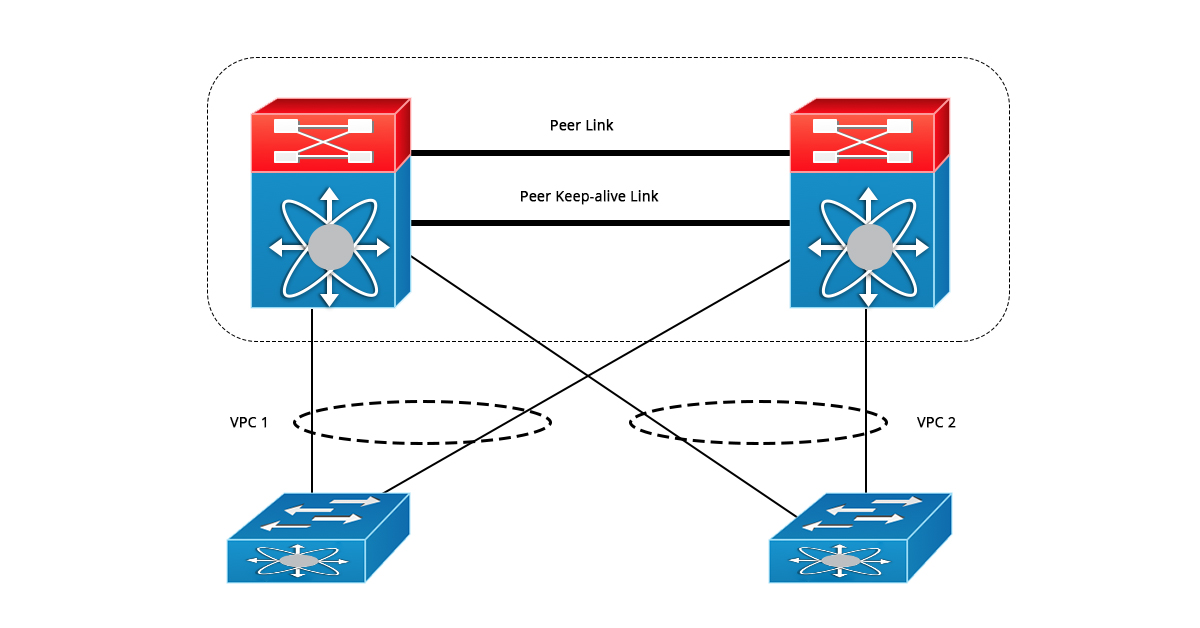 As a Cisco specific protocol, vPC certainly has its own unique advantages.

Both MLAG and vPC can create a port group between two switches and enable Layer 2 multipathing. In MLAG or vPC domain, each switch is managed and configured independently and is able to forward/route traffic without passing to a master switch. Despite their similarities, they still differ in some ways.

Obviously, the biggest difference between them is the difficulty of implementation. MLAG is a public protocol that is supported by almost every vendor using their own custom rolled implementation, while vPC is a Cisco Nexus specific protocol, not all the vendors have this technology. Thus, MLAG setup is a bit easier than vPC.

Another issue is compatibility. For vPC pairing, the same type of Cisco Nexus switches must be used. For example, it is not possible to configure vPC on a pair of switches including a Nexus 7000 series and a Nexus 5000 series switch. And the vPC peers must run the same NX-OS version except during the non-disruptive upgrade, that is, In-Service Software Upgrade (ISSU).

Besides, the vPC peer link must consist of at least two 10G Ethernet ports in dedicated mode. vPC is more advanced than MLAG. It supports both Layer 2 and Layer 3 multipathing, which allows you to create redundancy by enabling multiple parallel paths between nodes and load-balancing traffic where alternative paths exist. And if you want to enable Layer 3 multipathing, you could also use the Multi-Active Gateway Protocol (MAGP).

Both MLAG and vPC are desirable implementations for data centers and cloud computing networks that require the highest level of network bandwidth and reliability. MLAG takes the benefits of link aggregation and spreads them across a pair of data center switches to deliver system level redundancy as well as network level resiliency.

Before you decide on MLAG or vPC, the foremost thing is to make clear whether your networking devices can support MLAG or vPC. Then take account of your fabric architectures and your own specific needs to make an informed decision.