Muxponder vs Transponder: What's Their Difference in OTN Network?

Enterprise data centers and ISPs are facing increasing demands for low latencies, data security, higher speed and longer transmission distance in networks. Both transponders and muxponders are key components for enhancing their networks by meeting those demands. In Optical Transport Network (OTN), both of them belong to the optical transform unit (OTU)/wavelength conversion unit. Then what's the difference between muxponder vs. transponder? In this post, we will dig into the difference and their applications in the OTN network.

In fiber optical communications, muxponders can combine multiple services into a single wavelength/uplink by utilizing ITU optical transport network (OTN) protocol for mapping the services over the same uplink. A muxponder can maximize the fiber capacity by reducing the number of wavelengths that are needed to transport data, enabling more efficient use of fibers and making them ideal for future network growth. Carriers, ISPs and other industries often adopt muxponders since they have carrier-grade features like flexible remote monitoring and management, link diagnostic tools, and bi-directional performance monitoring of the client service interfaces and uplink.

What Is Optical Transponder?

A transponder can eliminate the need for generators by mapping the signals into standard OTN which supports forward error correction (FEC) in long-haul and metro amplified links. Optical transponders are usually classified according to their data rates and signal transmission range. Carriers, ISPs and other industries often deploy transponders to build their carrier-grade backbones and DCI networks, or for providing managed services to enterprises.

Main Difference Between Muxponder vs. Transponder in OTN Network

In fiber optical communications, both transponders and muxponders are the elements that receive and send the signals over the fiber. Muxponders combine multiplex low-capacity services into a single high-capacity wavelength/uplink. Transponders convert each optical signal from the customer equipment to a wavelength.

The main difference between muxponders vs. transponders is that muxponders have the additional capacity to combine multiple services into a single wavelength by multiplexing several channels to a higher-order signal, which enables more efficient use of fibers than a transponder.

Applications of Transponder and Muxponder

Transponders and muxponders are used to conduct OEO (Optical-Electrical-Optical) applications in the WDM network. The functions mainly include:

When to Use Transponders and Muxponders?

Transponders and muxponders can automatically receive, amplify and re-transmit signals on new wavelengths without any changes to the data carried over the signal at all, which can not be achieved by only adopting transceivers. 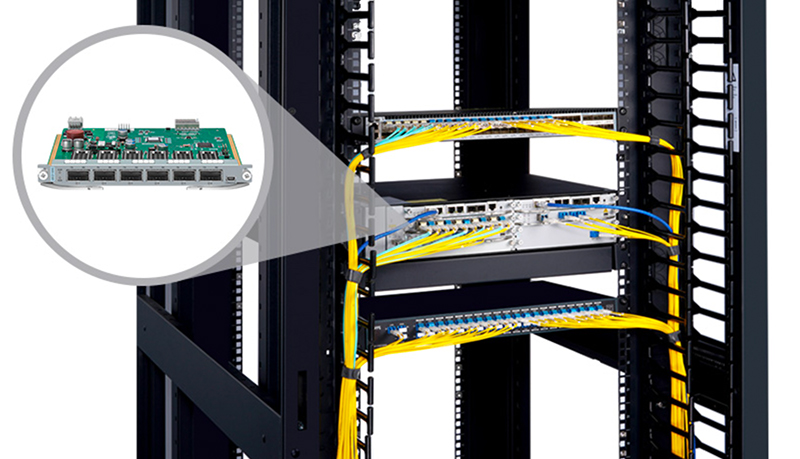 A WDM solution based on active transponders or muxponders is a better choice, especially when transceivers and switches are not fully compatible or when transceivers alone are not to enough meet your needs. For instance, you may need higher speed, longer transmission distance, and higher security than that achieved by the combination of switches and routers already installed. Below are some cases where using a transponder-based solution can solve common challenges:

1. If you want to encrypt your networks, muxponders and transponders will contribute to protecting sensitive data and meet regulatory requirements with encryption.

2. If the data needs to be transmitted over a very long distance which the transceivers don't support long-distance WDM, an OEO-based solution with transponders and muxponders can extend the distance of WDM network with FEC error correction.

3. If ISPs need to hand off a gray (i.e. non-WDM) signal to end-users, transponders and muxponders can realize it and make it easier for ISPs to restrict the bandwidth of optical connection.

4. If the data needs to be transmitted at a higher rate in WDM networks than that achieved by transceivers, transponders and muxponders are another way to support a faster rate without turning to faster transceivers which could be larger than the vendors prefer.

Generally, it's highly individual when it comes to whether you need transponders and what transponders you need. There are many factors you should take into consideration before purchasing, such as the compatibility with the existing switches and transceivers, the speed and distance you intend to cover and other requirements.

FS provides the best 10G/25G/100G transponders and 10G/100G/200G muxponders, together with professional chassis and accessories to meet all your needs.